Gymnast on the pommel horse

The pommel horse (also: pommel horse or simply horse ) is a gymnastics device with a shape similar to the horse . In current competitions, the horse's body is 160 cm long, 115 cm high and 35 cm wide.

The oldest surviving gymnastics horse with which Jahn is said to have exercised ; Photo from 1931

Long before the art of gymnastics and in antiquity, replicas of the living horse were in use for preparatory riding exercises , especially for getting on and off; so with the Roman cavalry and in the Middle Ages for the training of knightly skills.

These exercises were then also used in connection with fencing lessons at universities and general schools for aristocrats ; this was known as vaulting , for example .

Under Friedrich Ludwig Jahn (1778-1852), the so-called "gymnastics father", they were then adopted into the art of gymnastics and trained and designated accordingly. Jahn called the exercises swing and the device afterwards called swing . The buck used for related exercises also comes from Jahn's time.

In the 19th century, the gymnastics horse still had a longer, sometimes slightly raised neck and a shorter croup , which made it reminiscent of its natural model. Today's gymnastic horses are built on the same side.

In many exercises, it is with handles, the rolls provided, connecting the center of the back, the saddle , include (Am true horse saddle, the rolls however Zwiesel called).

In addition, today's gymnastic horses are height-adjustable by legs running in sleeves or tubes. 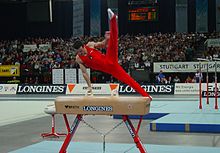 Marius Urzică on the pommel horse

On the pommel horse, exercises of the classic apparatus gymnastics for men are performed, in which the pommel is used for support with the hands while at the same time rotating or scissor-like movement of the legs. Its correct name is pommel horse Mogilny (named after the Soviet gymnast Valentin Viktorovich Mogilny ) after the two handles ( pommel horse ) on the body of the device.

Another exercise in the context of classic apparatus gymnastics was the horse jump , in which the horse was jumped lengthways or sideways, depending on the gender of the gymnast. This exercise goes back to the bull jumping practiced in antiquity , although at that time a real bull had to be jumped over.

Both exercises are performed as part of competitions and are part of the Olympic gymnastics program.

Each Turner must during freestyle beturnen device all three parts (center, both ends), with continuous circular movements of both legs only by the required scissor elements - be interrupted - as a transition between the circular motion and the pendulum. Swinging through the handstand position is allowed. The hands are the only parts of the body that are allowed to touch the device. The whole freestyle must be performed in a steady, controlled rhythm .

The pommel horse is probably the most difficult device, especially for the referees at gymnastics competitions: Minimal differences in the way the hands are supported on the horse B. already cause significant differences in rating. In addition, the individual gymnastics elements follow one another so quickly that only a professional can judge them correctly.