The Blücher was a heavy cruiser of the Admiral Hipper class , as the type ship of which she was originally intended. She was ordered by the Navy under the household name Kreuzer G and named after the Prussian Field Marshal Blücher .

The heavy cruiser Blücher was built at Deutsche Werken in Kiel . The commissioning took place on September 20, 1939 under Captain Heinrich Woldag .

The Blucher began after its entry with the testing and training cruises in the Baltic Sea . They lasted until March 30, 1940 because of the long, harsh winter. In contrast to her sister ship Admiral Hipper , the Blücher was given the " Atlantiksteven ", which was supposed to protect the forecastle better against water coming at high speed, even before it was commissioned.

Use in the Oslo fjord

One of the 28 cm Krupp guns at Oscarsborg Fortress 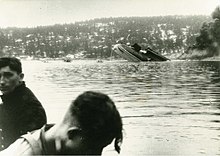 The sinking Blücher, keel up, only the stern protrudes from the water. Some German soldiers have saved themselves on land 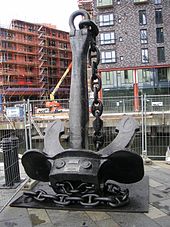 Recovered anchor of the Blücher

The first combat mission of the Blücher in the invasion of Norway, the " Operation Weser Exercise ", led to the total loss of the ship on April 9, 1940. Previously, the Blücher was released on March 30, 1940 from the trial relationship. Full readiness for action was to be declared from May 3, 1940. On April 7, 1940, the lack of training in the areas of heavy artillery as well as in combat service and in the leak guard was reported in writing to the Navy High Command.

As the lead ship of Warship Group 5 under Rear Admiral Oskar Kummetz , the cruiser, along with the heavy cruiser Lützow and the light cruiser Emden, along with smaller units, was supposed to bring mountain troops and administrative experts to Oslo to take over the city. Kummetz held discussions with the commandant of the Blücher , Captain Heinrich Woldag , about the marching speed of the unit and, contrary to the commandant's conviction, enforced an extremely low speed, which made it easier for the enemy to fight the ship. At the narrowest point of the Oslofjord , the Drøbak Narrow, the Blücher was fired at at 5:21 a.m. by the Oscarsborg coastal battery under Colonel Birger Eriksen on the island of South Kaholmen with its old Krupp AG guns . The Vormars received a direct hit from a 28-centimeter grenade in the main anti-aircraft station. Another 28 centimeter hit went into the hangar, which caught fire. A rudder failure due to a hit forced to drive even slower. Steering with the screws , the ship was brought back on course. At this moment, the Blücher received several 15-centimeter hits from close range (1100–400 meters). Two torpedoes from the Kaholmen torpedo battery, located 500 meters north of the fortress' 28 centimeter main battery and commanded by the retired Kommandørkaptein ( frigate captain ) Andreas Anderssen , led to the total loss of the ship. The Blucher drove badly damaged and burning from the fire range of the batteries. The steering gear failed again, whereupon Captain Woldag gave the order to anchor. With this he wanted to prevent hitting the rocks and first let the fire on board be extinguished before continuing. However, the ship was listed more and more to port. Admiral Kummetz handed over his authority to the commandant of the Lützow , Captain August Thiele.

At 0722 the cruiser capsized and sank over the bow east of the Askholmene archipelago . 830 crew members and army soldiers of the landing command were killed, although these numbers are still not fully documented. The losses are likely to have been even higher. The survivors had to avoid the burning oil slick, which many men of the crew fell victim to. The other crew members escaped to the island, where they held out for 36 hours in the cold and wet until they were rescued. Corpses drifted out of the wreck for weeks and were recovered and buried by the Norwegians in coffins provided.

The wreck is still 90 meters deep in the Oslofjord. Various announcements to raise it have so far not been carried out. Since it is to be regarded as a naval war grave , an uplift should no longer be an option. Already in 1994 over 1,600 tons of oil were pumped out, because over the decades an oil film could always be seen on the water at the sinking site. But there are still several thousand liters on board the wreck and threaten the environment, as the wreck could break up or leak due to the slow rusting.

Until 1994 only two anchors and the three propellers made of valuable bronze from the Blücher were recovered.

Parts of the Arado Ar 196 reconnaissance aircraft , which was still on the catapult when it went down , were recovered in 1994. When the wings and the BMW 132 star engine were lifted, these largely disintegrated as a result of contact with the air. The remains were taken to Stavanger Airport and preserved in the Flyhistorisk Museum, Sola (Sola Aviation Museum) there.

In 2014 the remains of the Blücher were initially placed under monument protection by the Norwegian “ riksantikvar ”.