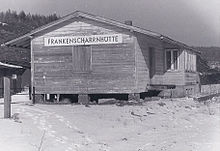 The Clausthal lead smelter (BHC) in Clausthal-Zellerfeld , also known as Frankenscharrnhütte , was a site for the extraction of heavy and precious metals from Upper Harz Gangerzen from the Middle Ages until the second half of the 20th century . It was located in the Innerste valley at the confluence of the Innerste and Zellbach rivers . 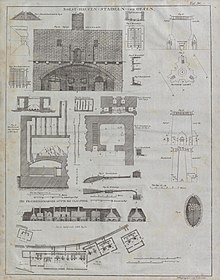 A smelter is said to have been located at the end of the upper Innerste Valley as early as 1180 . In 1355 the hut tome Frankenscherven , the Frankenscharrnhütte, was mentioned for the first time. The name comes from the activities of Frankish miners back in the Innerstetal to the ores of running here Rose Höfer and Silbernaaler lode mined .

The first new building took place in 1554, which is why this year was often seen as a foundation. It was also only then that it was customary to operate huts in the same place for long periods of time. The Frankenscharrnhütte obtained its ores from the neighboring stamping works in the Zellerfeld Valley, which were supplied by the pits of the Zellerfelder , Rosenhöfer, Silbernaaler and Burgstätter Gangzug . Mainly lead was produced , also in the form of wires and pipes, silver , copper and molten lead , later also cinder blocks (1844). The steelworks has been expanded over the years and the processes improved.

From 1866 only raw lead was produced and the silver and fine lead production was moved to the Lautenthaler Silberhütte . The operation took off with the connection to the newly built Innerstetalbahn in 1877. The plant could now be supplied with coking coal from the Ruhr area, which meant that the less effective use of charcoal or Schaumburg coal, which was laboriously brought in by horse and cart, could be dispensed with. The Clausthal lead smelter played a central role in the processing of the Upper Harz lead ores, while the ores from the Lower Harz Mountains were processed in the Oker lead smelter . At times 33% of German lead production was produced in Clausthal. The company had around 200 employees.

The state-owned lead smelter Clausthal was transferred in 1924 to the Prussian mining and smelting company , which had been founded shortly before . From 1925 the official name was Bleihütte Clausthal-Lautenthal , with the Clausthal and Lautenthal sites each forming operational departments (raw smelter and fine smelter). The end of Clausthal and Lautenthal ore mining in 1930 meant a cut in the ore supply, so that in addition to the remaining Grundner concentrates, raw materials were also purchased from other regions. This is why the comparatively small smelter had to struggle with high transport costs and environmental problems due to its unfavorable location.

Modernization of the filter technology and the mechanization of the smelter processes could not prevent operations from having to be stopped on December 24, 1967. On the one hand, metal prices and thus revenues had fallen sharply, on the other hand, Preussag acquired a much more economical location with the Friedrich-August-Hütte in Nordenham and its own port at the mouth of the Weser . Most recently, the lead smelter had just over 100 employees and produced a maximum of 114 tons of raw lead every working day.

After the shutdown, parts of the plant that could still be used were moved to other Preussag operations, the rest was scrapped and all buildings were demolished from July 1968.

The foundry trials of the Clausthal lead smelter in 1923 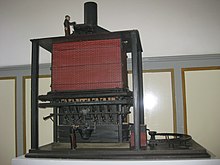 In 1923 the filmmaker Friedrich Herwig († 1964) made a three-part film about mining and metallurgy in the Upper Harz, in which the state of the art at the time is well documented:

In the film, the high level of manual work and the low level of occupational safety became clear: no precautions were taken against burns or the inhalation of harmful smoke from the hut. The few extraction hoods were only slightly effective. 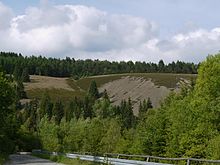 Only a few visible traces of the former steelworks have survived. Most noticeable are the bare slopes at the emission point of impact of the hut - here the heavy metal pollution is so high that even the ground cannot hold itself and the bare rock comes to light. The hut area with a few remains of walls and foundations is fenced and only sparsely overgrown because of the heavy metal pollution in the ground. It is managed by the legal successor Harz-Metall . Samples are regularly taken there to monitor the migration of heavy metals.