The burning buttercup grows as a deciduous, perennial herbaceous plant , the stature heights of 8 to 50 cm reaches 70 cm in individual specimens. It has a short “rhizome” and fibrous lateral roots. The upright, ascending, seldom prostrate or flooding stem is wavy and curved, as well as bald or sparsely hairy and roots are only formed at the lower nodes. The green to reddish stalk limbs are straight between the nodes ; the lower stem nodes often take root.

The burning buttercup occurs in a land form, a floating leaf form and a submerged water form - these growth forms are not genetically fixed, but develop depending on the water level and can merge into one another. Floating leaf forms are mainly formed in spring when there is flooding. The leaf stalks elongate greatly and the leaf blades floating on the surface enlarge. In the water form, however, the leaves are reduced; the flowers wither. The long-stalked basal leaves have a length of up to 7 centimeters, oblong, wedge-shaped or rounded and entire leaf blades. The stem leaves with short stalk with a sitting sheath have a lanceolate and entire to serrated blade. The leaf blades of the lowest stem leaves are 0.7 to 6.5 cm long and 0.04 to 1 cm wide, lanceolate to inverted lanceolate or thread-like with a smooth or serrated leaf edge. 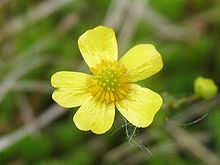 Single flower with five yellow petals, many yellow stamens and many greenish carpels

All parts of the plant of the burning buttercup are poisonous. The epithet and common name are derived from this: The sap of the plant has a pungent, pungent taste. Protoanemonin , which occurs frequently in the buttercup family, is poisonous (about 0.05%). In its fresh form, like the poison buttercup , it causes severe irritation of the mucous membranes. This plant species is therefore avoided by grazing cattle.

The burning buttercup has a wide natural range in the northern hemisphere in North America , North Africa and Eurasia . It occurs in Canada and the USA, the Azores and Madeira , northern Algeria and Morocco , Turkey and Altai , Denmark , Norway , Sweden , Finland , Ireland , the United Kingdom , Belgium , the Netherlands , in Germany , Austria , Switzerland , Italy , France , the Iberian Peninsula , the former Czechoslovakia , Hungary , Poland , Belarus , the Baltic States , the European part of Russia , northern Ukraine , the former Yugoslavia , Bulgaria , Romania , Albania and northern Greece . In Australia this species is a neophyte .

The burning buttercup thrives from the lowlands to the alpine region. This calcareous plant prefers swamps , wet meadows , moats , ponds and banks of other bodies of water as a location . The conditions are often wet; so there are temporary floods that alternate with dry phases. Mostly it is acidic sand, peat or mud soils . The burning buttercup occurs in societies of the associations Caricion fuscae, Calthion or Littorellion. In the Allgäu Alps in Bavaria, east of the Upper Hörnle-Alpe on the Riedberger Horn , it rises up to 1,420 meters above sea level. In Austria , it can be found moderately to rarely in all federal states. It is endangered in the western Alps .

Depending on the author, subspecies and varieties are given:

The burning buttercup is rarely used as an ornamental plant for pond edges.