Caroline Müller was born on July 31, 1964 in Oss, the Netherlands. In 1979 she moved with her family to Bünde , where she attended secondary school and then began an apprenticeship as a tailor.

Her father recognized her potential as a singer early on and is still her manager today . Caroline Müller took part in several talent competitions , first under the stage name Carol Dean , and shortly afterwards became a member of the German girl group Optimal , which was produced by Peter Kent and made up of Claudia Stürzenbecher, Sylvia Frötschel, Caroline Müller and Sabine Lürenbaum, who was Miss in 1983 Osnabrück existed. Two singles were released: He Was Magnetic and The Good-Bye .

In 1985 she was discovered by the German composer and music producer Dieter Bohlen at a talent competition near Hamburg , in which she took part with her band . Together, Müller and Bohlen created the stage name CC Catch, with the two Cs standing for the first names Caroline and Catharina.

In July 1985, their published debut - Single I Can Lose My Heart Tonight and became an international success. CC Catch and Bohlen worked together successfully until the end of 1988, but then separated in a dispute. Subsequently, among other things, a long name conflict over the artist name “CC Catch”, which Dieter Bohlen claimed for himself, flared up. Ultimately, this was awarded to the artist by court order.

CC Catch was moved to England and worked with different producers, including the former guitarist of Duran Duran , Andy Taylor , together. In the fall of 1989, the single Big Time was released , which was shortly followed by the album Hear What I Say and the single Midnight Hour .

In the early 1990s, CC Catch was working on a Peter Gabriel project that resulted in the song Harmonix . This appeared in 1993 on the album Way Down Below Buffalo Hell by Jam Nation . In 1998 she returned to Germany , released the single Megamix '98 and appeared on the television show Top of the Pops .

In 2003 their single Shake Your Head reached the top 12 of the sales charts in Spain and became a summer hit in southern Europe. In 2004 CC Catch took part in the ProSieben show Comeback - The Big Chance . This show produced the single Survivor and the album Comeback United , on which the participating artists such as CC Catch, Limahl , Chris Norman , Benjamin Boyce , Coolio , Jazzy from Tic Tac Toe , Haddaway , Emilia and The Weather Girls contributed various songs. In the same year she appeared in the opening act on the USA tour of the pop duo Modern Talking . 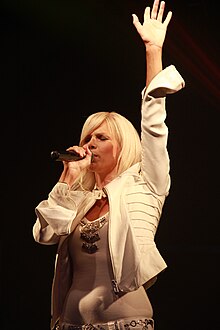 In September 2010 the single Unborn Love was released , a collaboration with the Spanish music producer Juan Martinez.

In 2015 CC Catch completed a tour through the United States, in Los Angeles , Dallas and Chicago , in 2016 the first big concert followed in Toronto , Canada, in 2017 a concert tour through South America (Argentina, Peru, Chile, Brazil, Bolivia) .