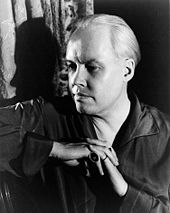 Carl Van Vechten (born June 17, 1880 in Cedar Rapids , Iowa , † December 21, 1964 in New York ) was an American photographer and author . He was known as a supporter of the Harlem Renaissance and as administrator of the literary estate of the American writer, publisher and art patron Gertrude Stein . 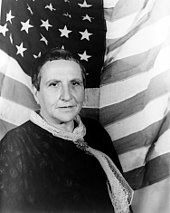 Van Vechten graduated from the University of Chicago in 1903, and three years later he moved to New York City, where he worked as a journalist. After an early but unhappy first marriage, he married his second wife, the actress Fania Marinoff , in 1914 . Even if he was married to her for the rest of his life, he was still homosexual. This became known when some documents and photographs were examined 25 years after his death. He first met Gertrude Stein in Paris in 1913, they were in contact all her life, and before her death she decreed that Van Vechten should manage her literary estate. He helped to find a publisher for the unpublished works. In a similar way, he also supported the African-American writer Nella Larsen .

Unlike Langston Hughes , even in old age he found the strength to defend himself against the anti-communist agitation of Senator McCarthy during the Cold War in the 1950s , without distancing himself from his views.

In 1961 Van Vechten was appointed a member of the American Academy of Arts and Letters in New York .

Between 1915 and 1920 several books with essays by Van Vechten were published, the subjects were, for example, music and literature. In 1920 his book about cats, The Tiger in The House was published . Seven novels were published between 1922 and 1930.

Van Vechten was very interested in African American writers and artists and supported many of the major exponents of the Harlem Renaissance , including Langston Hughes and Wallace Thurman . Unlike Charlotte Mason , however, he maintained far more friendly relationships with his protégés.

His controversial novel Nigger Heaven was published in 1926, it is about the unrestrained and obscene nightlife in Harlem, which Van Vechten described in great detail. Especially from established critics, black and white, Van Vechten had to take criticism, for example that he describes the negative stereotypes of African-Americans and that the novel is an "affront to the hospitality of blacks and the intelligence of whites" ( WEB Du Bois ). Still, the novel became a bestseller that brought Harlem's wild life into living rooms and reading rooms. Especially young artists within the Harlem Renaissance defended Van Vechten.

Notes on Van Vechten's friendship with Mabel Dodge Luhan , Gertrude Stein and other personalities can be found in the autobiographical essays Sacred and Profane Memories , published in 1932.

The majority of Van Vechten's letters and papers can now be found in the Kniecke Library at Yale University .

Van Vechten began photographic work in the 1930s. His main work is in "The Carl Van Vechten Photographs Collection" in the National Library of the USA, the Library of Congress in Washington, DC . It contains 1,395 photographs from 1932 to 1964. Most of the work consists of portrait photographs of celebrities, including representatives of the Harlem Renaissance. A small part of the collection shows American landscapes.