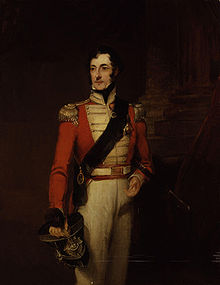 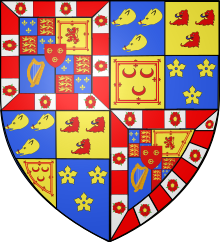 Coat of arms of Charles Gordon-Lennox, 5th Duke of Richmond

Charles Lennox was the eldest son of Charles Lennox, 4th Duke of Richmond and his wife Charlotte Gordon. As apparent marriage of his father, he carried the courtesy title Earl of March from 1806 . He followed his father on his death on August 28, 1819 as Duke of Richmond , Duke of Lennox and Duc d'Aubigny. In 1836 he also inherited the property of his maternal uncle, George Gordon, 5th Duke of Gordon , which is why he changed his family name from "Lennox" to "Gordon-Lennox" under a royal license and added his coat of arms to his coat of arms.

He received his education at Westminster School and Trinity College Dublin . At the age of 18 he joined the British Army as Ensign in 1809 , became a lieutenant in the 13th Regiment of Light Dragoons in 1810 and commanded a company in the campaigns on the Pyrenean Peninsula during the Napoleonic Wars . From 1810 to 1814 he was adjutant to the Duke of Wellington , in 1813 he became a captain in the 52nd Infantry Regiment and received a serious chest wound in the battle of Orthez (February 27, 1814). He also took part in the Battle of Waterloo (June 18, 1815). Wellington then sent him to the Prince Regent with important dispatches. On this occasion he became major and, in 1816, Lieutenant-Colonel .

From 1812 to 1819 Lennox was an MP in the House of Commons for the constituency of Chichester . When his father died in 1819, he left the House of Commons and took his seat in the House of Lords as Duke of Richmond . Here he joined the more moderate Tories without particularly distinguishing himself. He was an opponent of Catholic emancipation , and signed the protest against the measure that deprived the small Irish tenants, who were entirely dependent on the aristocracy, of the right to vote . In 1829 he was accepted into the Order of the Garter as a Knight Companion . In the autumn of 1830, when the hardship and discontent of the common people expressed itself in the form of riots and arson, he advocated an investigation and improvement of the situation of the workers. He also took over the post of general postmaster from the hands of the Whigs in November 1830 . As an opponent of the appropriation clause in the Reform Bill, however, he resigned his office on May 29, 1834, at the same time as Ripon and Stanley, and has since held the middle ground between Whigs and Tories in Parliament. 1835-1860 he was Lord Lieutenant of Sussex . As a passionate representative of the basic aristocracy, in 1846 he fought fiercely against Peel's free trade policy . In his final years he was particularly involved in agriculture and horse breeding and was one of the founders of the Royal Agricultural Society of England . He died of dropsy in London on October 21, 1860, at the age of 69.

The Richmond River in the Australian state of New South Wales is named after him.