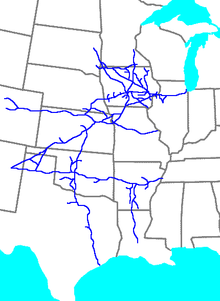 The Rock Island network extended mainly over the states of Colorado , Illinois , Iowa , Kansas , Missouri , Nebraska , New Mexico , Oklahoma, and Texas . The two easternmost points of the route network were Chicago and Memphis (Tennessee) . In the west, the route network extended to Denver and Santa Rosa (New Mexico) , in the south to Galveston in Texas and Eunice in Louisiana and in the north to Minneapolis . The most important routes led from Chicago via Des Moines and Omaha to Denver, from Minneapolis via Des Moines to Kansas City (Missouri) , from St. Louis via Kansas City to Santa Rosa, from Herington in Kansas via Dallas - Fort Worth to Galveston and from Santa Rosa to Memphis, Tennessee. The route network was densest in Iowa and reached most of the cities in a state there.

The following important information is missing from this article or section:
The story from 1852 to 1975 is missing
Help Wikipedia by researching and pasting it .

In 1851 , the Chicago & Rock Island Railroad , founded four years earlier, began building a line from Rock Island on the Mississippi River to La Salle , where a connection to the Illinois and Michigan Canal to Chicago was planned. Their first train ran on October 10, 1852 .

The Union Pacific Railroad began merger negotiations with the Chicago, Rock Island and Pacific Railroad in the mid-1960s. The hearings before the Interstate Commerce Commission dragged on for several years. By the time approval was finally granted in 1975, Union Pacific had already given up its takeover offer. As a result, the company filed for bankruptcy. After the renovation failed, it finally had to be liquidated. Her last train ran on March 31, 1980 . The collapse of Rock Island was the largest in US railroad history. Much of the railway infrastructure has been sold. After successfully completing bankruptcy proceedings in January 1984, the company renamed itself Chicago Pacific Corporation and invested in consumer products. The company was taken over by Maytag Corporation in 1989 .

The trademark rights to the original company name and the last logo used from 1974 to 1980 were acquired by the entrepreneur Robert Riley. He started a new company Chicago, Rock Island & Pacific Railroad, LLC ( AAR -reporting mark: CRIP). In spring 2019, CRIP took over the Mississippi Delta Railroad ( AAR reporting mark: MSDR) from the previous operator Gulf & Ohio Railways . MSDR operates 60 miles of freight from Swan Lake near Glendora via Tutwiler and Clarksdale to Jonestown , which is owned by Coahoma County . In the spring of 2019, CRIP also leased a 0.4 km (0.25 mile) section of track in Swan Lake directly from Coahoma County. With inclusion of rail freight traffic on this section, the CRIP has also itself to a class-3 local railroad - railway company . MSDR and CRIP operate two EMD GP38 diesel locomotives that are fully painted and lettered in the style of the original Rock Island after 1974.

The list gives an overview of the presidents of the railway company, as well as the Chief Executive Officer (from 1964) and Chairman of the Board (from 1956)

The song skirt Iceland Line of Leadbelly is about this railway company. There are various cover versions of the song, including by Johnny Cash and Lonnie Donegan .

In the mid-1930s, the company decommissioned around 200 freight cars and 15 locomotives every month. Their scrapping initially took place at various locations until it was centralized in Silvis , IL , ( ) in 1938 .