Choupette (born August 19, 2011 in Fontaine-sous-Préaux as Guimauve du Blues Daphnée ) is a French Birman cat who is used as a model , among other things . She became famous as the house cat of the fashion designer Karl Lagerfeld (1933–2019).

The animal weighs about 3.5 kg. Lagerfeld compared the tail with boa feathers and the eyes with a star sapphire .

The white Birman cat with blue eyes originally belonged to model friend Baptiste Giabiconi . He asked Lagerfeld to take care of the cat while he was abroad. Lagerfeld took a liking to the animal, and finally Giabiconi gave him the cat.

The name Choupette means "sweet" or "sweetness" in German.

The cat became known in 2012 through a tweet from a French magazine editor.

The Twitter account @ChoupettesDiary was set up and operated by Ashley Tschudin, the former social media coordinator of the online newspaper The Daily , which was discontinued in 2012 , and was only authorized by Karl Lagerfeld in June 2012. Karl Lagerfeld also set up Instagram and Facebook accounts for the cat .

Lagerfeld “complained” in 2012 that the cat was more famous than him. Regardless of this, he created the image of a diva in the style of Greta Garbo for her and described the cat as aloof. She would hate children and other animals. Two maids would take care of their needs . At dinner she sat at Lagerfeld's table. The dishes were prepared for them by their own home cook. She was also given her own dishes in upscale restaurants and allegedly has a preference for expensive caviar . She also had her own bodyguard and traveled by private jet .

Choupette has been reported in various media. That's how Karl Lagerfeld spoke about her in New York Magazine . The Süddeutsche Zeitung used the answers to create a fictional interview with the cat in which Choupette spoke of himself in the third person. Brigitte Bardot wrote to Choupette in order to dissuade her owner from a fashion collection made of furs , which she was unsuccessful with.

The KL store window on Regent Street in London during the Monster Choupette! -Campaign 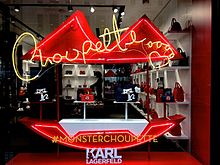 As an advertising figure, Lagerfeld let her advertise Opel and Japanese beauty products, with which she allegedly earned three million euros in 2014. The Opel photos were shown at a vernissage in Berlin in 2015 . Choupette also appeared as a cover model, together with Gisele Bündchen and Linda Evangelista , in various editions of Vogue . In 2014 the guide book Choupette: The Private Life of a High-Flying Fashion Cat was published . Lagerfeld also developed its own collections under the titles "Monster Choupette!" And "Choupette in Love", which include various accessories such as socks, key rings, shopping bags, handbags and T-shirts.