Helvetius is a redirect to this article. Further meanings are listed under Helvetius (definition of terms ) . 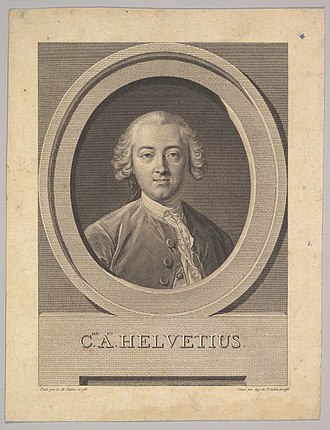 Claude-Adrien Helvétius ( kloʊd adriˈɑ̃ ɛlveɪˈsyüs ), actually in the non- Latinized form Claude-Adrien Schweitzer (born  February 26 or January 26, 1715 in Paris , † December 26, 1771 in Paris or on his country estate Château de Voré) was a French philosopher of sensualism and materialism of the Enlightenment . He was the husband of the Salonnière Anne-Catherine de Ligniville Helvétius .

The great-grandfather Johann Friedrich Helvétius (1630–1709) originally came from Köthen (Anhalt) . He had 1,649 medicine in the year Harderwijk in Holland studied and later became the personal physician of William III. (Orange) . His son Jean Adrien Helvétius (1662–1727) was also a doctor. He went to Paris. His son Jean-Claude-Adrien Helvétius (1685–1755), the father of Claude-Adrien, became the Queen's personal physician . This ensured the family's rise to the ruling circles of absolutist feudal society. Claude-Adrien's mother was Geneviève Noëlle de Carvoisin (1690–1767).

As the only son of his parents, Claude, born in 1715, was cared for and pampered. The enlighteners - Fontenelle and Voltaire - vied for the mentoring position of this precocious, brilliantly gifted, promising youth. As a radiant figure and an unparalleled dancer, he swarmed through his youth in the frenzy of the senses, but at the same time tried to get in touch with the spiritual life. During the time when Helvétius was still attending school as a pupil of the Jesuits , he is said to have performed in the great opera one evening under the mask of a famous solo dancer. This bold escapade betrays the security and unshakable self-esteem of a young man who is equally spoiled by nature and fate.

Claude-Adrien Helvétius was a regular visitor to the Saturday discussion group in the Club de l'Entresol , which had been founded by Pierre-Joseph Alary (1689-1770) and Charles Irénée Castel de Saint-Pierre and from 1720 (1724) to 1731 took place in the mezzanine floor apartment on Place Vendôme in Paris by Charles-Jean-François Hénault (1685–1770).

The diaries, which were only published in 1907, provide a deep insight into this youth era. "From them speaks the cult of a glowing sensuality, which is reflected in mythological comparisons and images." (Werner Krauss)

General tax farmer and chamberlain to the queen

Helvétius was destined for the financial sector by his father, who bought him the office of main tax leaseholder , Ferme générale , which he took up in 1738 at the age of 23. “The office was associated with such enormous income that Helvétius could afford to abdicate at the age of thirty-six and retire as lord of the castle to his possessions in Voré.” (Werner Krauss). Even after his resignation, Helvétius kept in contact with the highest circles by becoming the Queen's Chamberlain.

However, most of the time he devoted to his studies. He was in close contact with other Enlightenment thinkers such as Jean Baptiste le Rond d'Alembert , Denis Diderot , Paul Heinrich Dietrich von Holbach and was a frequent guest at the Château de la Brède by Charles de Secondat, Baron de Montesquieu . 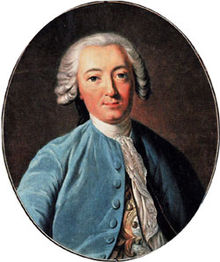 In the salon of the Marquise du Deffand he met her niece Anne-Catherine de Ligniville. The two married in 1751 and Minette, as Anne-Catherine was called, led, as Madame Helvétius, after the death of her aunt, her former salon for almost 50 years , later under the name of Auteuil (cercle d'Auteuil), in which the greats of the Time was wrong.

In 1758 De l'esprit appeared with a royal printing privilege, avec approbation et privilege du roi , but anonymously in Paris. Helvétius personally presented a copy to the royal family. Nevertheless, the State Council revoked the permission to print. The entire edition was confiscated. Helvétius was urged to withdraw and, after initial reluctance, gave in. He did not feel called to be a martyr and believed that intelligent readers would recognize the nullity of this revocation anyway. The attacks by the Jesuits, the Sorbonne and the Pope also threatened Helvétius with personal persecution, which he was able to fend off thanks to his good relationships. It was the Archbishop Christophe de Beaumont of Paris who announced a mandement on January 23, 1758 , followed by an arret des Parlement in Paris and on January 30, 1759, the indexing by Pope Clement XIII followed.

Helvétius managed to maintain good relations with the court. In 1764 he made a trip to England and - on an official mission - to Prussia , where he was honored at the court of Frederick II . France and Prussia had been enemies since the Seven Years' War , but the French government wanted to explore ways in which relations could be improved.

After his return, Helvétius lived in Paris, where he died on December 26, 1771. Shortly before his death in December 1770, the leading minister, Étienne-François de Choiseul , who was his friend, was dismissed. 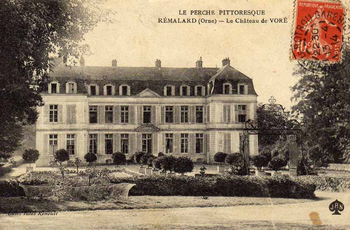 Until Helvétius' death in 1771, Paul Henri Thiry d'Holbach was not only a frequent guest at his residence at the Château de Voré (Collines des Perches, Loir-et-Cher ) or in his Paris city apartment on rue Sainte-Anne , but both were lifelong friends.

Together with Jérôme Lalande , Helvétius came up with the plan to found a philosophers' lodge, but did not live to see the “ Neuf Sœurs ”. After his death, Madame Helvétius became Grand Master of the women's box attached to it. These Freemasons celebrated their first two "St. John's Feasts" in 1776 and 1777 in the park of the house in Auteuil. Voltaire wrote in his Dictionnaire philosophique about Helvétius: “I loved the author of Esprit .” When Voltaire was accepted into this lodge on April 7, 1778, he was given Helvétius' masonry clothing as a sign of special honor.

Helvétius is a determined sensualist and materialist who was heavily influenced by John Locke . He traces all ideas back to the impression of external objects on the senses of the individual. Helvétius starts from the sensitivity of matter. It gave him great difficulty in explaining the transition from inanimate to animate matter.

All activity arises from innate self-love , the striving for sensual pleasure and the disgust for sensual displeasure . The benefit determines the value of the actions; but since benefit and harm are relative terms, there are no necessarily good or bad actions. The enlightened egoist realizes that everyone's happiness is the prerequisite for their personal happiness.

The enlightener Helvétius starts from the fundamental equality of all people and thus not only rejected all pretensions of the nobility, but also campaigned for equal rights for women. Although it recognizes the right to property, it goes beyond the intellectual preparation of civil society. He tried to limit inequality through strict inheritance law.

Helvétius advocates rigorous atheism . Belief in God and soul is the result of the human inability to understand the laws of nature. Religion, especially Catholic, deliberately keep people in this state of ignorance out of the interests of power. In contrast to many of his contemporaries, Helvétius does not see religion as a factor of stability, but as a threat to the political order. The title of the second chapter of the seventh section of his work On Man ... reads: "On the religious spirit that destroys the spirit of legislation". Helvétius sees the reason for this destructive effect in the “interest of the priest”: “An inactive class is ambitious: it wants to be rich and powerful and can only become this by depriving the civil servants of their authority and the peoples of their property. In order to acquire both, the priests based the religion on a revelation and declared themselves to be its interpreter. If you are the interpreter of a law, you can change it at will. So in the long run you become its author. ”Despite these and many similar statements, Helvétius does not answer the question of the origin of all religion with a theory of priestly deception; he explains religion from people's striving for happiness. In many chapters of his work, Helvétius proves to be an opponent of all religious intolerance and a champion of tolerance in the legislation of the bourgeois state.

Posthumous portrait after the engraving by Saint-Aubin

Jean-Jacques Rousseau's marginal notes on his copy of De l'esprit have survived. Because of the persecution to which Helvétius was exposed, Rousseau refrained from public criticism. Without naming Helvétius, he dealt with him at the Émile . In particular, Rousseau denied that the judgment could be traced back to perception.

Denis Diderot refused to reduce all differences in talent to education and the environment.

During the French Revolution , revolutionaries were split into atheists and deists . The devout Maximilien de Robespierre arranged for Helvétius' bust, which stood in Versailles, to be destroyed.

The early communist François Noël Babeuf dealt with Helvétius in prison in 1795 . The importance of Helvétius for utopian socialism was already recognized by Karl Grün ( The social movement in France and Belgium . Darmstadt 1845).

Among the writers of the 19th century, Stendhal was most deeply influenced by Helvétius.

Marx and Engels sought to justify in the German ideology why the "utility and exploitation theory" in Helvétius and Holbach did not take on a direct economic character but the status of a philosophical theory. Georgi Valentinovich Plekhanov was particularly concerned with Helvétius among the Marxists . In 1896 his study Holbach, Helvétius and Marx appeared . The preference of the Russian Marxists for the French materialists of the 18th century can be traced back to comparable social conditions, as Anton Pannekoek pointed out in Lenin as a philosopher . In Russia too, dealing with feudalism was still an urgent task.

In January 1764 he was accepted as a foreign member of the Prussian Academy of Sciences .