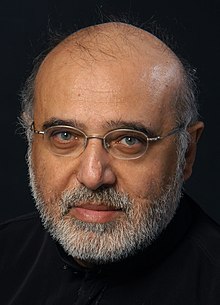 Cristian Petrescu (born April 9, 1950 in Bucharest ) is a French pianist of Armenian origin from Romania .

After taking piano lessons for 10 years with the piano teacher Ana Pitiş at the Dinu Lipatti Gymnasium in Bucharest, Cristian Petrescu was accepted as the best placed in the entrance examination at the National Music University of Bucharest in 1969, during the communist rule of the Ceaușescu era . A little later he emigrated with his family to the USA via Beirut , Lebanon, where he gave his first public piano recital at the American University of Beirut in 1970 .

Equipped with a scholarship, he studied from 1970 to 1974 at the Juilliard School in New York with Josef Raieff. There, as a piano accompanist, he had the opportunity to get to know artists like Nathan Milstein , Ruggiero Ricci and the violin teachers Ivan Galamian , Dorothy Delay and Felix Galimir .

In 1972 he won first prize at the Aram Khatchaturian competition in New York. After completing his studies at the Juilliard School with a Master of Music Degree in 1974, Aloys Kontarsky made it possible for him to receive a scholarship for the Darmstadt summer courses . There he premiered Wolfgang Rihm's piano piece No. 4, for which he was awarded the Kranichstein Music Prize for contemporary music.

Subsequently, the cellist Siegfried Palm , the then director of the Cologne University of Music , made it possible for him to do postgraduate studies with Aloys Kontarsky (piano) and Karlheinz Stockhausen (composition) at the Cologne University of Music . From 1975 to 1977 he worked here as Stockhausen's assistant for his composition class. In 1977 he completed his studies with Kontarsky with the concert exam (piano recital and Schumann piano concerto), which he passed with distinction. From 1977 to 1978 he attended György Ligeti's composition course at the Hamburg University of Music .

After auditioning works by Bach, Schönberg, Boulez and Stockhausen, he worked from 1981 to 1986 as a pianist in the Ensemble intercontemporain in Paris. In 1984 he won first prize at the Iannis Xenakis Competition in Paris.

In 1989 he became a French citizen and then moved to Berlin, where he a. a. also performed in chamber music concerts with members of the Berlin Philharmonic .

On November 16, 1989, a week after the fall of the Berlin Wall , he took part in the first regular chamber concert in the newly opened chamber music hall of the Berlin Philharmonic , which was dedicated to the works of George Enescu . On the same day he performed Enescu's 3rd Violin Sonata in Romanian folk character op.25 in a workshop under the direction of Yehudi Menuhins together with the French violinist Gilles Apap .

In 1998 he was awarded the Le Diapason d'or and Choc du Monde de la Musique and the Grand Prix du Disque of the Académie Charles Cros for his recording of George Enescu's piano works with Harmonia Mundi .

After the end of communism, he gave piano recitals both in his hometown of Bucharest and in other Romanian cities and has performed as a soloist in orchestral concerts.