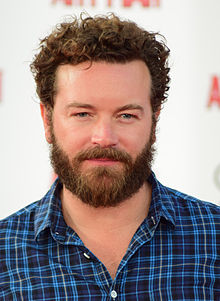 Danny Masterson at the Ant-Man film premiere in June 2015

Danny Masterson began his acting career at the age of 4. At first he only appeared in commercials. At the age of 16 he moved with his parents to Los Angeles, where he got his first film role in A Family Called Beethoven . Over time, Masterson worked in other films, including 1997 on the side of John Travolta and Nicolas Cage in Face / Off - In the body of the enemy .

Masterson acted in various television series, so he played a role in Roseanne (1994) and Cybill (1997-1998) with Cybill Shepherd . His breakthrough came with the television series The Wild Seventies , in which he played Steven Hyde from 1998 to 2006 .

His brother Christopher and his half-brother Jordan and his half-sister Alanna are also actors. Masterson has been with Bijou Phillips since 2005, and they married in October 2011. Their first daughter was born in February 2014. The couple, like Masterson's siblings, are Scientology supporters .

Masterson has been a DJ for a number of years and is known as DJ Mom Jeans.

Masterson was accused of abuse or rape by four women in 2017. Masterson denied the allegations. Netflix fired Masterson from The Ranch series in December 2017. United Talent Agency ended their collaboration with him.