This article covers the small town in Albania; for the Albanian politician, see Sulejman Delvina .

Delvina ( Albanian  also  Delvinë ; Greek Δέλβινο Délvino ) is a small town in southern Albania , 16 kilometers northeast of Saranda . At least a third of the population has emigrated since 1990; today Delvina still has 5754 inhabitants (2011).

The city is located in a hilly area at an altitude of 200 meters, surrounded by higher hills and deep streams. Delvina has a mosque and an Orthodox church. The remains of a medieval castle can be found on a nearby mountain. Ancient Phoinike is located on the plain below the town near Finiq . A little outside, in the village of Rusan, is the Gjin-Aleksi mosque from the 17th century, and a little to the south, the Muslim Xhermëhalla complex, which is about the same age .

Mosque in the center 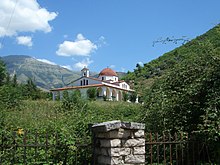 New Orthodox Church on the outskirts

A large Greek minority originally lived in the Delvina district . However, their number has fallen sharply because many emigrated to Greece , especially the young. While in 1990 around 4000 of the total of 8000 inhabitants belonged to the Greek minority, a little more than ten years later there were only 500 Greeks among 4000 Albanians. Emigration is not limited to the Greek minority, but includes all population groups. A village near Delvina is mainly inhabited by Aromanians .

The religious community with the largest number of members is traditionally the Islamic , followed by the Orthodox Church . In the 2000s, Dutch missionaries founded a Reformed church and German Franciscan Sisters founded a Catholic church. Finally, there are also followers of the Bektashi in Delvina .

Origin in the Middle Ages

Delvina originated in the early Middle Ages after the decline of nearby Phoinike. Allegedly the city got its name from Delvu , a Byzantine strategist who had a castle built here. At the end of the 9th century the place was conquered by the Bulgarians , in 1119 the Normans established themselves in Delvina. From the beginning of the 13th century Delvina belonged to the despotate of Epirus . In 1340 the Serbian prince Sava became lord of the town. At that time, the influence of the Serbian Tsar Stefan Dušan extended to the Epirotic coast. In the middle of the 14th century, the noble family Bue Shpata won rule over Delvina. In 1354 a Pjetër Bue Shpata is attested as the owner of the castle and town. Gjin Aleksi ruled Delvina between 1372 and 1400 ; he was succeeded as the last city lord before the Ottoman conquest, Dep Zenebishi .

Heyday under the Ottomans

Turkish rule over Delvina began in the first third of the 15th century. In 1537 a Greek-speaking school was established. Around 1575 the city became the seat of a Sandschak -Bey. The main mosque was built at the end of the 16th century.

The Ottoman traveler Evliya Çelebi visited Delvina around 1670 and gave some information about the city in his travel book. He knew to report that Delvina was initially in Spanish hands in the Middle Ages (the Spanish probably refer to the Catalan mercenaries who were up to mischief in Epirus and Greece in the 14th century). After that, the Venetians were rulers of the city for some time. In Evliya Çelebi's time, Ajaz Pascha, a native Albanian, was Sanjak-Bey of Delvina. The Sanjak of Delvina comprised 24 Zeamets (larger Ottoman feudal rule) and 155  Tımars . There was a larger garrison, whose quarters were in Delvina Castle. Inside the small fortress there was also a water reservoir, ammunition depot and a small mosque in the 17th century.

Regarding the city itself, Çelebi reported that it had around 100 houses covered with tiles. These were relatively far apart, and almost every house was provided with a fortified tower. But there was no city wall. There were several mosques, three madrasas and about 80 shops, as well as an open marketplace. The area was characterized by many groves with orange, fig and olive trees. Çelebi said of the residents that they all speak Albanian and that nobody understands Greek. In the 17th century Delvina was a flourishing oriental city with a predominantly Muslim population. Orthodox Christians probably lived in the neighboring villages, where some old churches have been preserved to this day.

In the 18th century the political and social structure of the troubled Ottoman Empire had changed significantly. Instead of officials sent by the central power, members of the large landowning families were now the local rulers. This process, sometimes referred to as refeudalization, also affected Delvina. A family established itself that named itself Delvina after the city and was first mentioned in writing in 1720. In the second half of the 18th century, the Delvina fought with the coca for power, which led to long-lasting civil war-like conditions before the two clans were put in their place by Tepedelenli Ali Pascha in 1811 . The Pasha ruled the city for some time until the Ottoman Sultan retook Delvina in 1822 after Ali Pasha was assassinated.

In 1738 Spiro Strati, a Venetian merchant who came from Delvina, founded an important Christian school in his hometown. The so-called academy , which was taught in Latin and Greek, existed until 1799. Around the same time, a supraregional madrasah was built. This theological school of Muslims existed for 150 years and was closed in 1916.

Delvina experienced the peak of its development in the 19th century. At that time there were 295 shops and handicraft businesses, 50 mills, 14 inns, twelve mosques and seven tekks in the city .

The English illustrator and painter Edward Lear came to Delvina in 1856 and 1857 . He made a drawing of the Ottoman fortress, which at the time was still in good condition. Today there are only a few ruins left.

A small Jewish community existed in Delvina until the Second World War . These were Sephardi who had immigrated during the Ottoman period and were in close contact with the large Jewish community in Ioannina . Almost all Jews emigrated to Israel after the war .

At the time of communist rule, there were a few processing companies in the food industry in Delvina and a factory that dealt with the processing of medicinal plants. These were all closed after 1990. Today the local population lives mainly from retail trade and services. The largest employers are state and municipal institutions. There is a fish farm on the upper reaches of the Bistrica . The company uses old systems that were built in the 1970s. Delvina has so far benefited little from the booming tourism in the nearby coastal city of Saranda. However, there are joint efforts by the city administration and some entrepreneurs to interest guests in the historical sites in the area ( e.g. Mesopotam and Phoinike ). The most important excursion destination is the Syri i Kaltër karst spring . A number of pensions have been established in the past decade.

Delvina is the seat of a small community ( bashkia ) . Until 2015, the villages Bamatat , Vllahat , Rusan , Lefterhor , Kakodhiq , Sopot , Stjar , Vana and Blerimas also belonged and Delvina was the capital of the district of the same name . In 2015 the district was dissolved and the municipality of Vergo with the villages of Tatzat , Kalasa , Fushë-Vërr , Senica , Kopaçez , Qafë Dardha , Bajkaj and Vergo was incorporated. The municipality of Vergo had 1844 inhabitants, the new municipality a total of 7598 inhabitants (as of 2011).