The wire Schmiele ( Deschampsia flexuosa ), also known as the serpentine Schmiele , is a type of grass from the genus of the Schmielen ( Deschampsia ) in the sweet grass family (Poaceae). It marks acidic and poor locations and is often used for decorative purposes in floristry and horticulture due to its attractive panicles, like other Schmielen. 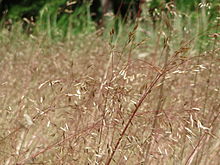 The wire Schmiele is a perennial plant that grows in loose to dense clumps . It is rooted up to 1 meter deep and reaches heights between 30 and 50, sometimes up to 70 and more centimeters. The smooth stalks grow upright or curved from the base. They are very tight and thin and wear one to three knots . The leaf sheaths are round on the back and slightly rough above. The ligule are blunt and measure up to 3 millimeters in length, but are mostly much shorter. The bald, finely bristled and rolled-up leaf blades feel oily and smooth. They become about eight inches long.

The inflorescences are very loose and open panicles . These are up to 15 inches long and about 10 inches wide. The main axes are winding, rough and very thin. They have two twisted branches at each knot. The 2 to 6 millimeters long spikelets are usually two-flowered. The mostly four-toothed lemmas carry a 4 to 7 millimeter long kneeling awn, which clearly towers above the spikelet. The flowering period extends from June to July. The fruit ripens between August and October.

The wire Schmiele is a perennial hemicryptophyte and a clump plant. In sunny locations it is red and deep-rooted. Its roots are over a meter deep.

The flowers are wind pollinated and self-sterile . The species blooms noticeably more in open places than in shady ones.

The fruits are caryopses, which are loosely surrounded by lemmas and spread as balloon and wing fliers by the wind; In addition, animals spread as Velcro hooks and water-like ones, and water spreads as rainworms. The fruits are light germs .

The wire Schmiele is used worldwide. It is native to all of Europe as far as Asia and North Africa as well as South and North America. It grows on nutrient-poor and lime-poor, acidic soils in dwarf shrub heaths and grass lawns , tall herbaceous vegetation and shrubbery in the mountains, as well as in deciduous and coniferous forests. As a semi-shade to light plant, it only blooms optimally in locations with more light such as wooded areas. It occurs in societies of the classes Vaccinio-Piceetea and Nardo-Callunetea, but also in the associations Quercion roboris, Epilobion angustifolii or the sub-association Luzulo-Fagenion. In the Allgäu Alps it rises in Vorarlberg on Pellingers Köpfle and in the Tyrolean part in the Kelletal on the Großer Krottenkopf up to 2000 meters above sea level.

Deschampsia flexuosa was 1753 by Linnaeus in Species Plantarum under the Basionym Aira flexuosa L. first published . It is usually placed in its own genus as Avenella flexuosa (L.) Drejer .

One can distinguish several subspecies: