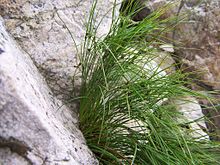 Three-leaf rush in a crevice 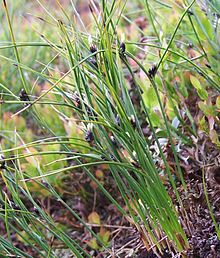 Three-leaf rush in the Tatra Mountains

The three-leaf rush ( Juncus trifidus , syn .: Oreojuncus trifidus ), also known as the three-column rush , belongs to the rush family (Juncaceae). It is a pronounced cold indicator and occurs mainly in the higher regions of the mountains on rocks and in crevices.

The three-leaf bulrush is common throughout Europe. In southern Europe it occurs only in the mountains between 1600 and 3000 meters above sea ​​level . It is also native to Asia as far as Siberia, Greenland and the eastern United States. In Germany, the species occurs only in the East Bavarian border mountains and in the Alps in a few locations. In the Allgäu Alps, it rises in the Tyrolean part of the Jöchelspitze from 2100 meters above sea level to about 2200 meters at the summit.

It grows on rocks, in crevices and in dry, poor lawns ( dwarf shrub heaths and grass grass ) and in small snow valleys . It is a species of the genus Juncetea trifidi.

The three-leaf rush is a perennial , evergreen hemicryptophyte that forms small clumps or lawns that are 10 to 30 (-40) centimeters high . The stems grow upright. They are thread-thin about 0.5 to 0.8 millimeters thick, hardly grooved and only slightly hairy, round and equipped with non-veined leaf sheaths at the base. The basal leaf sheaths are straw yellow to light brown and slightly shiny. They have no spreader or have a very short blade up to 1 centimeter long. The gray-green leaves are also very thin and semi-cylindrical with deep grooves. At the mouth of the leaf sheaths, ears 2 to 4 millimeters long, almost down to the base, are formed with eyelashes slit into three parts. There are no ligules.

The inflorescence is a two- to four-flowered spiral . It is clearly surmounted by two to three bracts . The red-brown tepals are 3 to 5 millimeters long. They have a green central nerve and are slender and long, pointed. They surround six stamens and three white recurved stigmas . The capsule fruit is red-brown and has a long tip. It is always shorter than the flower envelope.

The flowers are pollinated by the wind ( anemophilia ). As a light plant, the three-leaf bulrush does not tolerate any shade. It is a cold pointer. In the mountains it occurs only in subalpine to alpine altitudes. Their ecological focus is on dry to fresh, low-nitrogen to low-nitrogen, low-lime but never strongly acidic soils in alpine lawns, crevices and on scree.