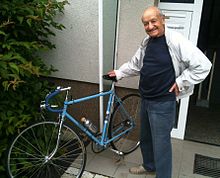 Schatz began cycling in 1937. In 1938, Edgar Schatz became the Halle youth champion in road racing , in 1939 second in the German junior road championship and in 1942 central German champion. Then his career was interrupted by World War II. He did not return from captivity until 1949 and began training again. In 1949 he won the seventh stage of the East Zone Tour from Leipzig to Berlin , and in 1950 he became the first GDR road champion in Greiz . In 1951 he won in East Berlin as part of the III. World Festival of Youth and Students the title of student world champion in the team time trial on the road, together with Detlef Zabel , Hesse, Stoltze, Lothar Meister I and Bruno Zieger ; in the individual race he finished seventh. He started for the BSG Chemie Buna Schkopau of the Buna-Werke , which carried the advertising slogan "Plastic and Elastic from Schkopau". In 1954 he ended his career. In total, he was able to achieve more than 100 victories on the track and road.

Schatz also started at the Masters Road World Championships in St. Johann in Tirol ; In 2001 he was 17 in the race over 40 kilometers in his age group at that time.

Edgar Schatz donated his championship jersey and his master bike from 1950, a diamond wheel model 67 from 1937, to the Course de la Paix cycling museum in Kleinmühlingen , where both objects are on display.

In 1949 the competition was known as the "Eastern Zone Championship".