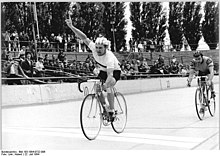 Bodo Straubel wins Around Berlin in 1984, crossing the finish line at the Weißensee Velodrome

Bodo Straubel won six medals for the SC DHfK Leipzig at the GDR road cycling championships between 1977 and 1983, including the championship title in 1981 with Martin Goetze , Andreas Petermann and Uwe Raab . 1981 Bodo Straubel East German champion in the time trial with the team of SC DHfK Leipzig ( Martin Goetze , Andreas Petermann and Uwe Raab). In 1983 he won the title in the individual road race . Also in 1981 he contested the stage race DDR Tour for the SC DHfK and was tenth in the overall standings. Straubel had already contested another stage race with the Tour of Poland in 1980 , in which, after finishing third on the fifth stage, he reached 15th place in the overall individual ranking. On his second tour of Poland he finished second in the overall standings. Twice - 1981 and 1984 - he won Rund um Berlin and also twice - 1979 and 1981 - Berlin – Cottbus – Berlin . At the International Tour of Thuringia , Straubel took third place in 1981 and 1984. With the Romania Cup in 1982 he won an international stage drive. After he left the SC DHfK Leipzig, he started for the ASG Weißenfels and also tried his hand at standing races .

Today Straubel runs a hotel in Canow, rents out holiday apartments and continues to be active in cycling as a recreational athlete.

In 1949 the competition was known as the "Eastern Zone Championship".