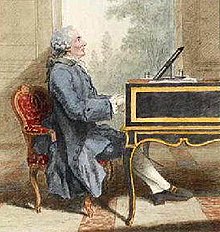 Egidio Romoaldo Duni (born February 9, 1708 in Matera (southern Italy), † June 11, 1775 in Paris ) was an Italian opera composer of the late Baroque and is considered one of the founders of the French Opéra comique .

Egidio Duni was the fourth son of Francesco Duni (also called Francesco De Duno in the baptismal register), the maestro di capelle in Matera, who gave his sons, also Egidio's brother Antonio, the first music lessons. At the age of nine, Egidio entered the Conservatorio di S. Maria de Loreto in Naples ; he was there, contrary to the assertion of an eulogy published in 1775 after his death, probably not a student of Francesco Durante . He then studied at the Conservatorio della Pietà dei Turchini . He had his first success at the age of 26 with his opera Nerone in Rome in 1735 ; thus he was a successful competitor of Giovanni Battista Pergolesi , who at the same time had a failure with his opera L'olimpiade . Duni then traveled to various cities inside and outside Italy to demonstrate his works, so that his operas were performed in Milan 1736, Florence 1744, Naples 1746, Genoa 1748, Lucca 1749, Bitonto 1749 and again in Florence 1751. During the Carnival of 1736 he stayed in London , where his opera Demofoonte as Demofontes, King of Thrace was performed in May 1737 at the King's Theater in English. Duni was appointed maestro di cappella at the Church of San Nicola in Bari on December 16, 1743 ; he held this office for about five years.

In 1748 Duni settled in Parma , where Philippe de Bourbon , Duke of Parma, hired him to be a maestro di cappella at court. He was also the music teacher of Isabella , daughter of the Duke and future Empress of Austria. Social life in Parma was based on the French court, and Duni got to know the artistic developments in Paris here, because the French Opéras comiques and Tragédies lyriques were performed in Parma under the influence of the theater director Guillaume Du Tillot . The composer wrote his last Opera seria ( Olimpiade 1755) and Opera buffa ( La buona figliuola 1756) here. After the poet and librettist Carlo Goldoni arrived in Parma in May 1756, a friendship and deepened collaboration developed with him. According to other sources, Duni is said to have set two French libretti to music, including Ninette à la cour (as Le Retour au village , 1756–1759), but this is not certain. In the following years, under Goldoni's influence, contacts came to the director of the Opéra-comique in Paris, Jean Monnet . At first he was not very enthusiastic about the idea of ​​entrusting the composition of a French opera to an Italian composer, but then he agreed and suggested a text by Louis Anseaume : Le Peintre amoureux de son modèle . The resulting Opéra comique Dunis premiered in July 1757 with brilliant success. The composer then finally moved to Paris, where he stayed until his death. Nevertheless, he received a lifelong pension of 2,400 livres a year from the Duchy of Parma . In 1759 Duni married Elisabeth-Catherine Superville, who was 23 years his junior.

The following year he got the position of directeur de la musique at the Théâtre-Italien in Paris , which was connected with a further annual salary of 1000 livres. In accordance with his new contract, he composed the opéra comique L'isle des foux (The Island of Fools) based on a libretto by Anseaume, a revision of the opera text L'Arcifanfano, re de 'matti by Goldoni (for the Venetian Carnival in 1750 with the music of Baldassare Galuppi ). After the success of two previous operas, this work was received very favorably by the Parisian public in 1760, confirming their preference for Duni's work and his Italianizing style. Further operas were created in the fruitful collaboration with Anseaume. Relations with the French poet and librettist Charles-Simon Favart , on the other hand, were tense , who had even tried to prevent a performance, but this did not affect Duni's success. After the success of the opera L'Ecole de la Jeunesse , the composer was rewarded by the Comédiens-italiens with an annuity of 800 livres. Between June 1766 and January 1768, Duni stayed in Italy for 18 months. The Italian comic opera had changed profoundly at that time through the works of Niccolò Vito Piccinni , Pasquale Anfossi and Giovanni Paisiello . After his return, Duni worked with the librettist Michel-Jean Sedaine ; the operas that followed were not very successful. With the composition of Thémire (first performance Passy 1770) Duni finished his operatic work and worked as a teacher in the last years of his life.

A brother of Egidio was the composer Antonio Duni (* around 1700 in Matera, † after 1766 perhaps in Schwerin ). Egidio's son, Jean-Pierre Duni (born September 21, 1759) composed a collection of Trois Sonates pour Clavecin ou forte-piano avec accompagnement de violon , published in Paris in 1778, which was dedicated to the Princess de Poix.

As a result of his solid training in Naples, Duni's extensive knowledge of tradition can be read from the works that have survived from his Italian period; They also give rise to a pronounced originality, especially in the treatment of the melodic material. Of much greater importance, however, is his French group of works. Against the background of the previous forms of Opéra comique, his operas immediately asserted themselves as a novelty, which was referred to as the new genre comédie mêlée d'ariettes . Duni's active French period began just after the Buffonist controversy of 1752–1754, in which, inspired by Jean-Jacques Rousseau , the "musicality" of the French language was at stake. Duni skillfully avoided any rivalry with Rousseau and supported those composers who sought ways to transfer the Italian intermezzi to French operas. The opera Le Peintre amoureux de son modèle , which was very successful not only in France, has been proven to be an original, not a parody of an earlier Italian opera; the Italian model exerted a strong effect, after the overture and an ariette take up earlier pieces by Duni. In this way, an ornate Italian style recurs in his French operas. His successful use of ensembles, which goes back to the collaboration with the librettist Anseaume, is also characteristic. Les Moissoneurs (Die Schnitter, 1768) has a particularly experimental character ; This opera stands out for its particularly virtuoso musical movement, its ornate cadences in the Italian style and its declamatory passages.

By the late 1760s, Duni's compositional style was becoming more and more out of date; the genre of the opera had changed its direction as a result of the works of Pierre-Alexandre Monsigny , François-André Philidor and André-Ernest-Modeste Grétry and overtook the earlier style. This also shows the lack of understanding that Duni showed towards the opera Orfeo ed Euridice by Christoph Willibald Gluck . His retirement from the stage in 1770 was a natural consequence of this development.