The endbrain or telencephalon ( ancient Greek τέλος telos , German 'end' and ἐγκέφαλος enkephalos , German 'brain' ) is a part of the brain and thus the central nervous system . It emerges from the anterior region of the forebrain and develops into the largest of the five brain sections in mammals (such as humans) . 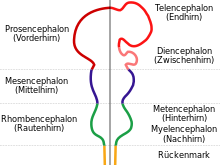 Other common names for this part of the brain are also cerebrum and cerebrum (from Latin cerebrum , “brain” , “brain”). In technical terms, however, cerebrum also describes the brain as a whole. 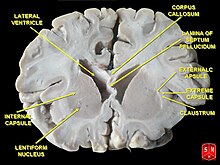 Section in the frontal plane through both cerebral hemispheres, their ventricles and the bar ( corpus callosum ) - distinguishable from the white substantia alba is the gray substantia grisea , outside as cortex ( cortex cerebri ) and inside as basal nuclei ( nuclei basales , with nucleus lentiformis ) visible.

Arrangement of gray and white matter in hemispheres

From the unpaired cerebral vesicle of the endbrain, a pair of roughly hemispherical structures develops, the hemispherical vesicles, which each become the cerebral hemisphere ( hemisphaerium cerebri ) on one side. In addition to the unpaired median tissue bridge ( lamina terminalis ), the two hemispheres create transverse tracts that connect with each other, the commissure systems of the endbrain and the broad bar ( corpus callosum ). The left and right hemispheres are divided by a deep longitudinal furrow ( fissura longitudinalis cerebri ) and each enclose a lateral ventricle as an internal CSF space . Each of the hemispheres contains inner core areas as basal ganglia ( nuclei basales ), which arise from the ventral (abdominal) telencephalon. These are enveloped by the external cerebral mantle ( pallium ), which emerges from the dorsal (back) telencephalon.

The surface of the pallium consists of the cortex of the endbrain or cerebral cortex ( cortex cerebri ) - similar to the cerebellar cortex ( cortex cerebelli ) - of gray matter with nerve cell bodies in several layers. Underneath is a so-called marrow bed made of white matter, a dense network of nerve fibers , the nerve cell extensions of which create diverse connections. As association fibers , they connect different areas of the cortex cerebri of the hemisphere on the same side with each other, as commissure fibers with those on the opposite side and as fibers of projection paths , they represent ascending or descending connections to and from various other regions of the brain or the central nervous system.

Scheme drawing of the right hemisphere from medial

Section in the sagittal plane through the left cerebral hemisphere

Connections of both cerebral hemispheres (commissures)

The two hemispheres are connected by fiber systems mutually each other, as the commissures ( Commissurae ) the median plane cross; Of these three, the bar is the most fiber-rich:

Products resulting from the ventral telencephalon subcortical nuclei are also known as basal nuclei or basal nuclei designated respectively as the basal ganglia . They lie at the base of the endbrain on the side and abdomen of a lateral ventricle and close to areas of the thalamus of the diencephalon . As a result of the fibers running through to and from the cerebral cortex, some of the nuclei have a striped appearance, which is why they are also known as the corpus striatum (striated bodies).

→ Main article : Lateralization of the brain

The cerebral cortex of a hemisphere can be divided into five or six lobes ( lobi cerebri ) on each side . Four of them lie on the surface (see illustration on the right), the island lobe is covered by the operculum , and the limbic cortex, which some experts consider the sixth lobe of the brain ( lobus limbicus ), lies in the depths.

On closer inspection, the individual furrows ( sulci ; singular: sulcus ) and convolutions ( gyri ; singular: gyrus ) of the various cerebral lobes show no exact symmetry when comparing the left and right side of the cerebral hemispheres of an individual. Some of these neuroanatomical inequalities in the halves, which are in principle bilaterally symmetrical, are also related to the fact that some of the cerebral functions are preferably performed in one of the two halves of the cerebrum. This procedurally different division is also known as lateralization .

The superficial part of the hemispheres or her pallium (pallium) is - with a few epithelial constant wall districts - designed as only a few millimeters thick cortex , the cerebral cortex . The tissue of this cortex of the cerebrum - the term pallium is often used synonymously - does not show the same structure histologically everywhere. Large areas of the bark are made up of six layers of different thickness ( laminae ). Different from this so-called isocortex is the allocortex , which is composed of two or three layers . The cerebral cortex is also not uniform from an evolutionary point of view and can thus be divided into the proportions of paleo-, archi- and neocortex (or pallium).

As with the brain as a whole, the telencephalon can also be differentiated from a phylogenetic or embryogenic perspective.

The Paleocortex (or paleopallium or paleopallium ) in accordance with a primitive has two-layer construction the most primitive type of a cortex, a "old brain". This is an evolutionary term. The paleocortex is located on the anterior lower part of the hemispheres. The sulcus rhinalis lateralis is considered to be the border to the neocortex .

Scheme of a brain view from the basal:
cerebral lobes of the hemispheres shown in color, similar to the figure above.
In humans, the olfactory bulb ( olfactory bulb , gray), lying in the olfactory sulcus , is surmounted by the frontal lobe . Tractus, trigonum, striae olf. and substantia perforata anterior lie in the gray area in front of the optic chiasm .

Because of its histological peculiarities, the palaeocortex is assigned to the allocortex (with a different structure than the isocortex ).

The archicortex (often synonymous: Archipallium ) can be seen as a stage between the paleocortex and the neocortex. A part of the cerebral cortex that goes beyond olfactory projection areas appears for the first time in reptiles and is histologically clearly distinguishable from the younger neocortex. With the later development of the neocortex, the archicortex is reduced in size and displaced to the inside of the temporal lobe .

The archicortex consists of the hippocampus , dentate gyrus and fimbria fornicis and also belongs to the limbic system , which is assigned a key role in the processing of emotional content. These formations of the archicortex belong to the so-called marginal arch . This marginal arch is divided into an inner and an outer arch by the commissure tracts of the corpus callosum as a formation of the neocortex. The cingulate gyrus and the griseum indusium also belong to the outer marginal arch . The latter is topographically a continuation of the dentate gyrus. Histologically, most areas of the archicortex also belong to the allocortex; the cingulate gyrus of the outer arch, however, already shows the complex structure of the isocortex .

The neocortex (often synonymous: neopallium ) is the evolutionarily youngest and most differentiated part of the brain. Neocortex can be understood to mean around nine tenths of the cerebral cortex (cortex cerebri). However, both names are not identical (see also the methodological differentiation of the various terms and the histological affiliation of the neocortex to the isocortex ).