Enniger is a district of the city Ennigerloh - a county's town in the district of Warendorf in Münsterland with about 3500 inhabitants. Neighboring communities and cities are clockwise, starting in the north: Warendorf , Beelen , Oelde , Beckum , Ahlen and Sendenhorst .

Enniger is located in the eastern Münsterland in the middle of the Westphalian Bay . Enniger is on the Münster – Warstein railway line , which, however, has no passenger traffic .

In the north-west, the town of Hoetmar , which belongs to the town of Warendorf , borders Enniger. The city center of Ennigerloh is located in the east of Enniger. The next train station for passenger traffic can be found in the Beckum district of Neubeckum, southeast of Enniger, on the Hamm – Minden railway line . In Beckum there is also a driveway to the A 2 federal motorway . Precisely to the south is the town of Vorhelm , which belongs to the city of Ahlen . In a westerly direction from Enniger you get to Sendenhorst via Tönnishäuschen . 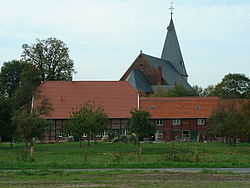 East view of Haus Enniger and the St. Mauritius Church

It is very likely that the Enniger court already existed in the 9th century. The first documented feudal lord of House Enniger was Bertoldus de Ennigger (Westphalian document book no. 43, Anno 1206–1207). Further successors were Johann von Walegarden around 1366 and Henrik von Horstel around 1443, whose daughter married Rötger von Voss, Burgrave of Telgte, in 1430. In the middle of the 17th century, Freiherr von Leutersamb married Sybille v. Voss and became the owner of the farm. After the death of Freiherr von Leutersamb and the last vassal Adrian von Voss in 1678, the fief of House Enniger reverted to the St. Mauritz monastery . This meant the end of the feudal lords of House Enniger.

From 1687 to 1840 Haus Enniger was leased to the Casparius Heese family and descendants. In 1840 Heinrich Ostermann from Beckum and Ignatz Bisping from Vorhelm bought the property. It served as a new home for the married couple Heinrich Ostermann and Elisabeth Bisping, as well as for today's descendants of Koch-Haverkamp. In recent years, Haus Enniger has been renovated by the Koch-Haverkamp family and has since shone in new splendor on the eastern edge of the St. Mauritius Church.

The Rückämper Chapel was built between 1685 and 1687 by Rückämper farmers in honor of the Holy Trinity. It is located about 2 kilometers north of Enniger on today's road to Buddenbaum.

In the period from July 18, 1794 to 1802, 8 French priests and a theologian who emigrated during the French Revolution found a new home in Enniger. They used the Rückämper chapel for celebrating Holy Mass.

Even thieves did not stop at the Rückämper Chapel and stole the hundred pound bell on the night of January 5th to 6th, 1849. This could only be found in pieces, which could only be remedied by casting a new 20 pound chapel bell. You had better luck in February 1974 when a Pietà carved from oak was stolen. The thief was convicted and so the Pietà came back to Enniger.

In 1956 a renovation was carried out by the Enniger local history club, including moving it 2 meters to the east. In 2003 the entire western front including half-timbering was renewed and the chapel was placed on a new foundation.

Parts of the St. Mauritius church in Enniger date from the last third of the 12th century. This is a massive Romanesque defense tower that has been converted into a church through changes over time. Due to its former use as a defense tower, it has no portals, only narrow window slits. A small Romanesque church was added to this fortified tower.

The Enniger Markt is a market event similar to a folk festival and one of the oldest markets in Westphalia. The first market mentioned in a document took place in 1552. The Enniger Markt has been held on the second Wednesday in July since 1899. In the meantime it starts the afternoon before.

A symbol of the Enniger market is the knight Voss, as a symbolic figure of the feudal lord of Enniger, to whom half of the duty (the other half to the duchy of Münster) was due. He thanks for the homage paid to him with a Münsterland grain from the carrying basket of the Kiepenkerl accompanying him .

The SuS Enniger has its sports field (natural grass) on Börgerskamp. There is an artificial turf pitch on the corner of Hauptstrasse and Vorhelmer Strasse. In addition, the club arranges game communities with the TWV in the C, B and A youth.