Archaeological finds attest that people roamed this area as early as the Stone Age and that people lived here in the pre-Roman Iron Age. The name Vorhelm can be meaningfully interpreted if one does not start from the Latinized spelling Furelmi, in which the h in the middle is omitted:

Two old trade routes crossed in Vorhelm: the “Hellweg”, which climbed from the north behind Vorhelm to the Galgenberg, and the “Friesenstrasse”, which also climbed from the west behind Vorhelm to the Beckum Mountains. From the earliest times, travelers discovered that Vorhelm was the place “before the ascent”. This increase was called "Helle", which was expressly proven for Vorhelm. Vorhelm was the home before the light, the home before the light. From this the name Vorhellehem, Vorhellem and finally Vorhelm emerged. 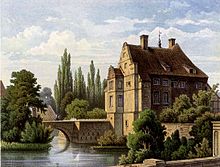 In the third biography of St. Liudger, written immediately after 864, the name Vorhelm is first mentioned in the Latinized spelling "Furelmi". In this text the name of a Vorhelmer was mentioned for the first time: Wulfbert. He had a sick, deformed child named Amulger. The believing father made a pilgrimage to the grave of Saint Liudger in Werden to pray for his child, and his child was healed.

In 1193 the crusades took place, in which the bishop of Munster was also involved. A popular patron saint of the Crusaders was St. Pancras. The foundation of the Vorhelmer Pankratiuskirche can be associated with this crusade. In 1193 the bishop rearranged the ecclesiastical districts and evidently also elevated the Pankratius Church, privately donated by Vorhelmer Knights, to a parish church. It was assigned as a "parish", that is, as a parish area, apart from the village farmers, the farmers Isendorf (now Tönnishäuschen) and Eickel (now the train station). This not only established the parish, but also the village of Vorhelm in the legal sense. However, this fact was only confirmed in a document in 1254.

Since 1193 Vorhelm belonged to the Archidiakonat (ecclesiastical administrative district) St. Mauritz (Münster) in the upper monastery of the Principality of Münster. In the late Middle Ages, the prince-bishopric was also divided into offices (“secular” administrative districts). Vorhelm belonged to the Wolbeck office, which included the landscape west of the rivers Angel , Werse and Ems with a drosten (nobleman) at the head. Later archdeaconates were replaced by deaneries (church) and offices by circles (political).

Towards the end of the 14th century, the Torck family gained a foothold in Vorhelm. They built the oldest part of the Vorhelm family, acquired or inherited from the Counts von der Mark and the de Beyer and Volenspit families in Vorhelm and the surrounding area many properties and farms that were subject to taxes for centuries.

In 1487 Torck donated the Vicarie St. Anna zu Vorhelm. In 1498 an Antonius chapel was mentioned for the first time at the old intersection, a "Tönnishäuschen", which later became the namesake of the Isendorf farmers. In 1522 the chapel was rebuilt and in 1752 the new building was built at the current location.

From the 16th to the 18th century, numerous wars raged ( Spanish-Dutch War , Thirty Years War , Seven Years War ) as well as the plague and many fire disasters, so that many Vorhelmer residents emigrated to Holland to work as grass mowers or soldiers.

During the Thirty Years' War, Vorhelm suffered from looting and pillage, especially in the 1630s. In 1632 the church was set on fire by passing troops. Several houses burned down with. At times the entire population of the village had fled. Because of the high contributions that were extorted , the village was still heavily in debt for many decades.

In 1628 the first documented rifle festival was held in Vorhelm. Lords at Haus Vorhelm became von Westerholt from 1673, from 1693 from Reede, from 1734 Droste to Vischering and from 1974 from Schall-Riaucour.

The Droste zu Vischering family has owned Haus Vorhelm since 1707 . Today the Vorhelm house is owned by the imperial counts of Schall-Riaucour through marriage .

In the Reichsdeputationshauptschluss of 1803, Prussia received parts of the dissolved bishopric of Münster along with other areas for its territorial losses on the Left Bank of the Rhine .

After the Peace of Tilsit , the Kingdom of Westphalia was re-established in 1809 , which was ruled by Napoleon's brother Jérôme , and which introduced new administrative structures based on the French model. The Mairie Vorhelm comprised the communities Vorhelm and Enniger and had a total of around 1,000 inhabitants. The Kingdom of Westphalia existed until 1813. After the French withdrew, Prussia took over, initially provisionally, its previous areas on the right bank of the Rhine. Due to the agreements made at the Congress of Vienna , the region became part of Prussia permanently in 1815. Under the Prussian administration, the Vorhelm community was assigned to the Beckum district in the new Münster administrative district and the Westphalia province .

The Vorhelm Office was formed in 1843 from the communities of Enniger and Vorhelm . In 1851 the parish parish Sendenhorst moved from the dissolved office Sendenhorst to the office Vorhelm. The mayor or bailiff was Franz Brüning. The administration was based in Tönnishäuschen (formerly Isendorf).

The Westphalian local poet and priest Augustin Wibbelt was born in 1862 , he lived in Vorhelm, where he died in 1947 and was buried.

From 1870 to 1893 the mineral strontianite (= strontium carbonate ) was mined in Vorhelm . It is used in the production of sugar to remove sugar from the molasses , but is also suitable for the production of tracer ammunition . Since the only abundant and minable deposits of strontianite in the world were in the southern Münsterland, the villages and towns experienced u. a. also forehead with one of the largest mines, the Alwine, a real "gold rush time", which ended quickly in 1893 after strontianite could be replaced by celestine (= strontium sulfate), a product that was made cheaper in England and Sicily.

In 1893 the new parish church of St. Pankratius was consecrated, the construction of which had started in 1891 according to plans by Hilger Hertel .

In 1939 Vorhelm had 1,710 inhabitants and grew to 2,400 inhabitants in 1946 due to the influx of mainly Silesian war refugees and displaced persons .

In 1968 the Cologne – Berlin line was electrified and passed the Vorhelm.

The Vorhelm station was shut down by the Deutsche Bundesbahn in 1989 after 101 years. From 1993 to 1999, Vorhelm experienced further population growth through the development of new construction areas.

In the evening hours of May 3, 2001, precipitation of 80 to 120 liters / m² fell on awls and forehead for several hours. In the “Bahnhof” district, the water rose from the canals and flooded several streets (“Ahlener / Vorhelmer flood”).

The castle was first mentioned in the 14th century as owned by the von Torck family . At the beginning of the 18th century the castle changed hands. The new owners were now the Count Droste zu Vischering . The castle has been owned by the family of the Counts of Schall-Riaucour since 1974 . The chapel of St. Antonius (Tönnishäuschen) belongs to Haus Vorhelm .

War memorial in fore helmet on the village square.

It was built in 1899 and moved to its current location in 1937. In 1954 the memorial was expanded to include victims of the Second World War.

The maypole on the main street in the village square.

The maypole is on the main street in the village square. The coats of arms of the individual village associations are attached to it. On the top there is a metal crown on which the Westfalen horse is shown.

St. Pankratius is a Roman Catholic Church that was consecrated on October 25, 1893.

The fleet of the fire engine includes:

TuS Westfalia ( TWV for short ) is by far the largest sports club in Vorhelm with 1000 members. In addition, the association founded in 1920, then under a different name than it is today, is the oldest association. The club is divided into six departments: football, volleyball, tennis, table tennis, popular sports and the Klein-Köln carnival society . The soccer department comprises almost a third of the members.

The Vorhelm Musikverein has around 420 members and operates an active musical education and youth work. The Vorhelm Wind Band is known as an ensemble of high musical quality. The 50-strong orchestra has already won awards in several state competitions and is recruited exclusively from musicians from the immediate vicinity of the village. The youth wind orchestra has around 60 active young musicians.