Erich Sokol attended the Goethe-Realschule (today Gymnasium Astgasse) in the 14th district in Vienna. In addition to his interest in handball, drawing was his passion from an early age. During his high school years he attended courses at the "Artistic Adult Education Center in the Academy of Fine Arts" in Vienna. In 1952, the young Sokol sold his first drawing to the socialist Kleine Blatt for a fee of 15 schillings at the time (the equivalent of around 8 euros today).

In 1952 he graduated from high school and began studying at the University of World Trade . In parallel to his business studies, drawing remained his true passion, and he achieved further sales successes with it. He produced picture jokes and political cartoons a. a. for Neuer Kurier , Die Presse , stern , Die Bühne , Wiener Bildwoche , Schweizer Illustrierte Zeitung , Arbeiter-Zeitung , Weltpresse and Münchner Illustrierte . Drawings by him were also bought and published by the English magazine Punch .

Erich Sokol stayed in America between 1957 and 1959. Equipped with a Moholy Nagy scholarship, he studied two semesters at the Institute of Design at the Illinois Institute of Technology in Chicago (courses in "Visual Design", "Photography" and "Typography"). During this time he earned his living primarily with graphic work for Playboy and The Lion Magazine . It was then that Hugh Hefner , founder and publisher of Playboy magazine , became aware of Sokol's talent and won him over as a regular contributor, who he remained for decades. Sokol was working on a volume of satirical drawings depicting American characters. His "American Natives" were published by Harper & Brothers in New York and later by Hamish Hamilton in London. In November 1959 Sokol returned to his native Austria and in 1960 joined the editorial team of the social democratic Wiener Arbeiter-Zeitung (AZ) as a political illustrator. From 1965 Sokol was a freelancer for the Süddeutsche Zeitung and in 1967 resigned from the editorial office of the Arbeiter-Zeitung.

While working as a political caricaturist in Vienna, he first achieved fame in broad circles of Austria: At that time, the AZ brought out its “best” caricatures, collected in volume.

In 1967, at the invitation of Gerd Bacher , Sokol switched to the newly reformed ORF , the state broadcaster, as chief graphic designer .

As chief graphic designer at ORF (Austrian Broadcasting Corporation), he made his debut in 1973 as a director of a television program. On Saturday, July 12th, 1975, Sokol's first cover photo appeared for the Neue Kronen-Zeitung (until 1996), and at the same time he broke off the 18 years of work for the men's magazine Playboy.

From 1987 Erich Sokol took over the formative position of art director for the ORF and was thus responsible for the entire design area (graphics, equipment, costume). In 1992, Sokol retired early as the ORF Art Director as part of an ORF relaunch.

From 1999 his cover pictures appeared for Die Presse and at the end of the 1990s he founded the Erich Sokol Private Foundation in Mödling with his partner Annemarie Höld-Praschl.

Well-known creations of Sokol were the " ÖVP -Tant '" in the Arbeiter-Zeitung , the station logo called ORF-Auge and his caricatures of the Social Democrat Bruno Kreisky, who was Federal Chancellor 1970-1983 . Sokol's front pages for the Kronen-Zeitung , the monthly business magazine trend and the news magazine Profil were characterized by their complexity and subtle humor. Sokol also designed the record sleeves to The Lord Charles of Carl Merz and Helmut Qualtinger and the logo of the catering company Do & Co . Sokol belonged to the " Gutruf clique" around Qualtinger, Sokol friend Teddy Podgorski and others , which was active from the 1950s .

He had a long friendship with the actor Felix Dvorak . With the portrait of Dvorak for his record “kuk Scharfrichter Lang” he created a large oil painting, designed the stage and poster for “0lympia” for the Mödlinger Komödienspiele in 1995 and staged the TV show “Felix Felix” designed for Montreux. 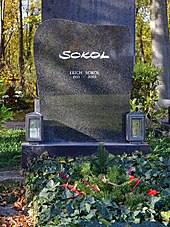 Grave at the Vienna Central Cemetery

Erich Sokol died on the night of Thursday, February 20, 2003, in his house in Mödling. He is buried in an honorary grave by the City of Vienna in the "Ehrenhain" (group 40, number 88) of the Vienna Central Cemetery.

Erich Sokol was married to Adriana Gaspar from 1961 to 1993, and they have three children from this marriage. In 1995 Erich Sokol met Annemarie Höld-Praschl, and in 2001 he married his long-time partner. Since his death in 2003, his widow Annemarie Sokol has been managing his artistic work, the Erich Sokol Private Foundation in Mödling.

As the greatest Austrian caricaturist and draftsman with a worldwide reputation, Erich Sokol received numerous honors for his artistic work, including: a .:

In 2014 the Prof. Erich Sokol-Promenade in Mödling and in 2016 the Erich-Sokol-Gasse in Vienna's 10th district of Favoriten were named after him.

More and more artists around the world are working in digital technology. In addition to traditional techniques such as pencil, ink or acrylic, caricatures and cartoons are also drawn by computer, digitally colored and sometimes published digitally. Front pages for Rolling Stone, Billboard, Time Magazine, The New Yorker and many other magazines are largely designed with digitally produced caricatures. Above all, the Internet and here the social media channels are used to distribute the caricatured statements and reach a large number of readers and consumers far beyond print. The Sokol Prize for Digital Caricature, Critical Art of Drawing and Satire, SOKOL for short, is intended to take this artistic development into account with an innovative and future-oriented prize and to further promote this trend. In cooperation with the Erich Sokol Privatstiftung Mödling and the Caricature Museum Krems, the state of Lower Austria awards the SOKOL - Prize for digital caricature, critical drawing and satire for outstanding achievements in the field of digital drawing every five years, for the first time in 2018. The Caricature Museum Krems is in cooperation act with the Lower Austrian state collections as a competence and communication center, network platform, hub and presentation location.

Exhibitions in the caricature museum Krems

The Caricature Museum Krems has already shown the following solo exhibitions by the artist: