Logo of the Euregio

The Euregio is a German-Dutch association to which 129 cities, municipalities, districts and Dutch water authorities ( Waterschappen ) belong. On the Dutch side, the area extends over the Regios Twente and Achterhoek as well as parts of northeast Overijssel and southeast Drenthe , on the German side the Münsterland , the county of Bentheim , the city and the district of Osnabrück and parts of the southern Emsland . It was founded in 1958 as the first European region and celebrated its 60th anniversary in 2018. The Euregio promotes cross-border cooperation between citizens, companies and organizations. Around 3.4 million people live in the Euregio on an area of ​​13,000 km². About two thirds of the population and the area are in Germany and one third in the Netherlands. The head office is in Gronau , directly at the Glanerbrug border crossing ( Enschede ).

At the end of the 1950s, cities, municipalities and provinces from the Münsterland, south-western Lower Saxony and the eastern Netherlands began campaigning for organized cross-border cooperation. This resulted in the founding of the Euregio in 1958, which is the first European region. It was above all the necessity of cross-border area development that prompted cross-border cooperation at the time. In both Germany and the Netherlands, the border areas were often not able to benefit from the developments in the rest of the country due to their peripheral location. The border communes strengthened their position by taking action together.

Various interest groups were initially formed in the Euregio area. In 1954, representatives of local authorities and companies on the German side founded the Rhein-Ems community of interests (later the Weser-Ems community community). In 1960 the “Belanggemeenschap Twente-Gelderland” (today Regio Twente ) was established in the Netherlands . A year later, in 1961, the "Samenwerkingsverband Oost-Gelderland" (today Regio Achterhoek ) was established. At the beginning, the three organizations worked together informally and concentrated on easier and politically supported topics, such as meeting citizens through art, cultural and sporting events or the expansion of bicycle paths. Since the mid-1960s, members of the authorities have met regularly in the Euregio working group. Together they worked on a transition from project-based contacts to programmatic cooperation in order, among other things, to strengthen the local economy and infrastructure and to solve cross-border commuter problems.

In 1971 a social-cultural working group was established. A few years later, this working group was named after its first chairman, Alfred Mozer (1905–1979). Mozer was a passionate advocate of the idea of ​​Europe. He believed that in order to work together, people must first get to know and trust one another. That is why he supported cross-border encounters between citizens. Cooperation was institutionalized with the Euregio Council in 1978. Prince Claus had suggested the foundation in 1974. On the occasion of a meeting of the Streekbelangen Oost-Gelderland Foundation, he said:

"Try to form a Euregio Council that knows how to put into words the interests of this cross-border region, but also the willingness to make joint efforts in your own circle."

The Council was the first regional cross-border parliament in Europe and henceforth the highest body of the Euregio.

In 1985 the Euregio secretariats on both sides of the border were merged. Queen Beatrix and Prince Claus opened the joint office at the Gronau / Glanerbrug border crossing. Two years later, in 1987, the first cross-border action program was presented. It contained strategies for the next 20 years in the economic, socio-cultural, technological and infrastructural areas. In addition to national financiers, the European Community was also involved in the financing. Working groups for the topics of economy, technology, social affairs, school and education, tourism, culture, agriculture, environment, traffic and everyday border problems / rescue services were set up to implement the strategy.

In 1992 the office was expanded to include the Euregio House. The increase in meetings and gatherings made it necessary to find a conference venue where they could take place regularly. In 1994 the conference center 'Terhaar sive Droste' was inaugurated by Prince Willem-Alexander .

When the European Union launched the INTERREG community initiative in the early 1990s, the Euregio's cross-border program was one of the first to be approved. With funds from the European Fund for Regional Development and national and regional donors, INTERREG A has been promoting cross-border projects in various areas since then.

In 2014 the three committees “Mozer - Social Development”, “Economy and Labor Market” and “Sustainable Spatial Development” were set up based on the Euregio 2020 strategy.

The Euregio, which until then was an e. V. was, a German-Dutch public-law special purpose association.

Tasks and fields of work

The aim of the Euregio is to remove obstacles that arise from the border so that a common supply area is created. In the economic field, she wants to strengthen the region's competitiveness. It supports small and medium-sized companies and encourages cooperation with companies and scientific institutions in the neighboring country. In this way, companies can open up new markets and improve their market position.

In order to develop the region even better, the Euregio is committed to expanding the infrastructure. An important economic factor in the Euregio area is tourism, because in addition to the larger cities such as Münster, Osnabrück, Enschede and Hengelo, the rural area also attracts many visitors. Joint marketing strategies and the structural cooperation between the regional tourism associations and small and medium-sized enterprises are intended to promote cross-border tourism.

On the social-cultural level, the Euregio promotes contacts between German and Dutch citizens in order to bring them closer to the culture and way of life of the neighboring country. For example, it stimulates the exchange between communities and organizes events for schools and clubs.

The Euregio sees itself as a platform for communal cooperation. It stimulates the exchange between cities and municipalities in areas such as health care, so that one can learn from neighbors and the systems are coordinated or compatible with one another as far as possible.

Overall, the Euregio pursues the goal of “ creating a supply area in a strong region in which the border is no longer an obstacle for people”. In order to realize this vision, the Euregio thematically focuses on social development, the economy and the labor market, and sustainable spatial development.

An important topic for the Euregio is a permeable cross-border labor market. The Euregio was the first cross-border organization to offer advice to cross-border commuters (see UNLOCK project ). In order to strengthen cooperation, the Euregio supports, among other things, mini and small projects that are funded by INTERREG funds. 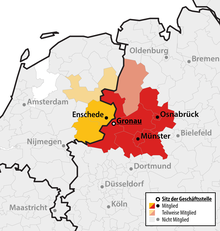 Map of the members of the Euregio

129 municipalities, (rural) districts and urban districts are members of the Euregio. You are in the following geographic area:

As part of the INTERREG program, projects in the areas of economy, technology, innovation, sustainable regional development and integration and society are funded in the Euregio. Here are some project examples: