Folke Bernadotte Graf von Wisborg (born January 2, 1895 in Stockholm , † September 17, 1948 in Jerusalem ) was a Swedish officer and philanthropist . From 1943 to 1948 he was Vice President and later President of the Swedish Red Cross . In 1948 he became the United Nations' mediator in Palestine ; on September 17 of the same year he was shot dead by members of the Zionist terrorist group Lechi .

Folke Bernadotte Graf von Wisborg came from the Swedish royal house Bernadotte . His father Oskar Karl August, a son of the King of Sweden and Norway Oskar II , was Prince of Sweden and Norway and, after leaving the Swedish royal family, he was named Prince Bernadotte and Count of Wisborg. Bernadotte claims to have grown up in a quiet and loving environment. Mercy and unselfish activity played an important role in his parents' home; For example, his parents held an annual pre-Christmas party for poor Stockholm families in their house. Folke Bernadotte, who suffered from dyslexia , attended the New Elementary School in Stockholm and, after graduating from high school, completed military training at the Army School in Karlberg and at the Cavalry School in Strömsholm . He then became an officer in the Livgardets Dragoons regiment . On December 1, 1928, he married his US-born wife Estelle Romaine Manville . From 1939 to 1940 he was Sweden's general commissioner at the New York World's Fair.

On September 1, 1943, he became Vice President of the Swedish Red Cross. Since its president, an uncle of Bernadotte's paternal side, was already 82 years old at this point in time, almost all official business was in the hands of Bernadotte. Immediately after taking office, he began to work out plans for the post-war activities of the Swedish Red Cross. This also included the activities of the Norwegian diplomat Niels Christian Ditleff to free Scandinavian concentration camp prisoners.

Furthermore, in his role in 1945, Bernadotte negotiated successfully with Heinrich Himmler about the reunification and release of the Scandinavian concentration camp prisoners. In addition to around 8,000 prisoners of Scandinavian origin, around 10,000 to 12,000 prisoners of other nationalities, mainly from Ravensbrück and Theresienstadt, were initially collected in the Neuengamme camp near Hamburg and later transferred to Sweden. This action, which has gone down in Swedish history and the history of the Red Cross movement as the “ White Buses ”, was carried out shortly before the end of the war by around 250 helpers from the Swedish Red Cross.

Later claims by Stockholm journalist Bosse Lindquist that non-Jewish prisoners were preferred to Jewish prisoners in the selection of the rescued prisoners and that Western European women were preferred to Eastern Europeans have been rejected by eyewitnesses. Another argument against this argument is the fact that around 5,000 of the approximately 20,000 prisoners who were rescued were Jews. One of the buses used at that time is now in the Yad Vashem Holocaust Memorial in Jerusalem . The historian Ingrid Lomfors alleged that the previous use of the white buses to transport around 2,000 French, Russian and Polish prisoners from the Neuengamme concentration camp to the Braunschweig camp resulted in direct involvement in the Nazi crimes and a serious breach of the Red Cross movement's statutes would have represented. From the point of view of other historians and those directly involved at the time, what speaks against this accusation is that the only alternative would have been the failure of the entire action. On April 23, 1945, Bernadotte received an offer from Heinrich Himmler that the Third Reich would capitulate to the USA and Great Britain if it were allowed to continue its war against the Soviet Union . According to his own statements, he assured Himmler that the offer was hopeless; nevertheless he passed it on to the Swedish government. The Western powers did not agree to this, and Hitler dismissed Himmler, who was acting on his own initiative, a few days later.

In 1952, Felix Kersten , Heinrich Himmler's personal physician and also apparently responsible for the rescue of numerous Jews and concentration camp inmates, published a copy of a letter that Bernadotte had allegedly written to Himmler in March 1945, which discredited him and the Swedish state to the utmost . Bernadotte said in it that Sweden was as little interested in released Jews as Himmler himself, only the private citizen Kersten had brought Jewish prisoners into conversation on his own. He also added a sketch of London with worthwhile goals for the German V2 rockets. Despite the absurd content, a commission first confirmed the authenticity of the letter after questioning witnesses. It was not until 1978 that the English historian Gerald Fleming found out that the so-called "Bernadotte letter" was a forgery in Kersten's hand. Apparently, Bernadotte and Kersten developed serious differences up to mortal enmity from a rivalry in the rescue of concentration camp prisoners. Kersten's foolish forgery was a reaction, among other things, to Count Bernadotte's refusal to publicly recognize his merits .

Book Instead of Guns

After the end of the Second World War , Bernadotte took over the management of the aid missions of the Swedish Red Cross in Germany, Austria and the Eastern European countries and visited the affected countries several times during this time. He wrote a book about his experiences during this time called Instead of Guns . In 1948 he became President of the Swedish Red Cross and was also chairman of the Standing Commission of the International Red Cross and Red Crescent Movement from 1946 to 1948 .

“When Henri Dunant began working for the Red Cross in 1863, he gave the movement the following slogan: Inter arma caritas - Mercy in the midst of arms (i.e. in war). The events since then and, last but not least, the experiences that we made after the Second World War, arouse the thought to take this slogan further and to say: Post arma caritas - After arms, mercy, and one day humanity will also come to that may say: Pro armis caritas - instead of arms, mercy. "

Death as a mediator in Palestine 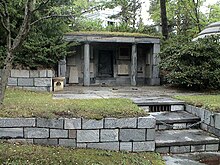 On May 20, 1948, he was elected the first mediator in the history of the United Nations (UN) and deployed to Palestine . During his work in the first Palestine War of 1948, he laid the foundation stone for the United Nations Aid for Palestine Refugees in the Middle East (UNRWA). In the negotiations with the Israelis he advocated recognition of the right of return of the Palestinian refugees; Specifically, on June 17, 1948, he asked the Israelis to allow 300,000 refugees to return. On September 17, 1948 he was shot together with the UN observer André Serot by militant leaders of the Jewish terrorist group Lechi . The reason for the murder was his public confession that the Palestinian refugees had the right to return to their homeland. In addition, however, his plan to place the city of Jerusalem under international supervision and to cede the Negev to the Arabs also met with massive opposition from the Israelis. His proposals for solving the refugee problem were the basis for Resolution 194 of the UN General Assembly of December 11, 1948, in which the right of return for refugees on both sides was established.

A few months later, the masterminds of the attack received a general amnesty from the Israeli government under David Ben-Gurion, despite strong suspicions . After the statute of limitations, the Israeli journalist and children's book author Baruch Nadel pledged to plan the attack. The attack is said to have carried out four members of the Lechi.

Folke Bernadotte was honored with a state funeral in Sweden. He is buried in the mausoleum of his father Prince Oskar on Norra begravningsplatsen in Stockholm.

Naming of streets after Bernadotte

In the Vienna district of Favoriten , Bernadottegasse was named after him because of his services to the needy population of Austria after the Second World War . There are also Bernadottestrassen and places in Frankfurt am Main - Nordweststadt , Berlin , Hamburg , Lübeck , Bielefeld , Kassel and Neu-Isenburg . In Copenhagen there is a Folke-Bernadotte-Allee, in Danish Folke Bernadottes allé, which also houses the Swedish seaman's church, the Gustaf's Church. Streets in his Swedish homeland have also been named after him, for example in Gothenburg and Ramlösa near Helsingborg . 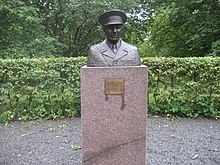 Monument to Folke Bernadotte in Kruså

There are monuments in Uppsala and Kruså at the border crossing to Flensburg .