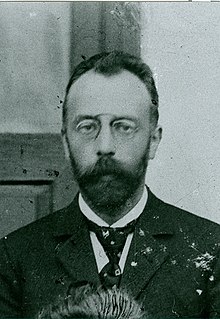 He was born in Hildesheim as the second son of the Hildesheim timber merchant Friedrich Anton Schreyer (1822-1894) and his wife Dorette, née Pott. Grandfather Christian Pott (1807–1872) founded the timber business in Hildesheim in 1830.

Schreyer's older brother inherited his parents' business in Hildesheim, while he himself moved to Bremen as a second-born after his apprenticeship and training as a timber merchant , where on January 10, 1888, he entered his own company, Fr. Julius Schreyer , in the Bremen commercial register registered.

Ms. Julius Schreyer and other companies

Together with his partner Ludwig Bruhn (1862–1940) from Dänischhagen near Kiel , Schreyer took over the trading agency of the traditional timber trade Leopold von Popper in Vienna, whose owners were the Berthold brothers and Armin Freiherren Popper von Podhragy and whose father was already the wood for the Construction of the Suez Canal . Among other things, they operated the largest steam sawmill in Europe with 18 full gates in Wygoda in the Crown Land of Galicia and delivered a particularly fine-grained spruce worldwide . With six new sawmills, the necessary steam locomotives and railway lines, a completely new wood reservoir has been opened up in the crown land of the Bukovina . The Fr. Julius Schreyer was the agent in Bremen.

In 1890 Schreyer founded the steam planing and sawmills Berthold & Armin von Popper & Schreyer together with the barons Popper von Podhragy in Bremen . The planned expansion in Galicia gave rise to the right of use in Krechowice near Dolina for felling and timber use in the forest area of ​​Prince Casimir Lubomirski in Krakow .

The Fr. Julius Schreyer in Bremen founded to 1897 in Bremen with Senator Ernst Adolf Hillegeist and his brother Albert Holzberger in Hannover and Peter Wilhelm Escher in Krefeld and his brother Carl Wilhelm Schreyer in Hildesheim, the Dolinaer steam sawmill GmbH with factory and plant in Krechowice.

The Dolina steam sawmill was operated on an industrial level with twelve gates. During this time, the factory in Krechowice, also known as the “Molly saw” after the founder's wife, was equipped with the most modern sawing machines for wood, some of which are still in daily use in Ukraine today. The capacity of the sawmill was designed for 3,000 railway wagons of sawn timber annually. This corresponds to a weekly train of 70 wagons which Fr. Julius Schreyer had to sell and market again from week to week. This conifer lumber from the fir forests around Dolina was mainly used as construction timber on the German market.

In Pensacola , Florida, USA, pitchpine was felled and traded in turpentine oil and the resins of the pine trees. From 1892 these goods were loaded with charter ships to Bremen and Hamburg from Fr. Julius Schreyer's own branch in Pensacola, which is shared with the local lumberman HH Boyer. Mainly with smaller Norwegian sailing ships, but also whole shiploads with the world's largest sailing ship company DH Wätjen and Co. from Bremen . After landing, the timber and resins were mainly marketed in Germany. At that time, Schreyer's Prime Pitchpine , the particularly resistant wood of North American swamp pine, was a well-known and sought-after branded product.

In addition, the German-American Lumber Company in Millville was operated in 1901 with the lumbermen HH Boyer, JR Saunders and BP Jones from Valdosta, who came from Pensacola . The Pitchpine sawmill was about 166 km along the coast, east of Pensacola. Millville is now a district of Panama City . The partners of Fr. Julius Schreyer from Bremen, Ludwig Bruhn, Eduard Lutz and Theo Poppe, constantly replaced each other in Pensacola; usually the stay was for half a year or longer. In 1903 Fr. Julius Schreyer took over the company entirely. In 1904 around 40 shiploads of processed sawn timber were carried out annually from Millville and Pensacola, mainly to Europe, South America (La Plata), but direct shipments to West Africa have also taken place.

When the railway line from Uszok (Hungary) to Sambor (Galicia) was expanded in Galicia, the opportunity arose in Sokoliki, on the upper reaches of the San , to build a steam sawmill with six gates. With this the wood reservoir of the Forest Carpathians could be opened up by Fr. Julius Schreyer . Particularly interesting were the fine-grained, strong fir trees and the significant beech forests in the hinterland of Sokoliki, today the Bieszczady nature reserve , in the very south-eastern corner of Poland.

The fine quality of this beech wood became so well known that later the then world-famous brand company Gebrüder Thonet from Vienna, a global player of its time, wanted to settle in Sokoliki with their classic “Viennese coffee house chair” made of curved wood. But the First World War prevented this. At that time, beech wood was also a very popular fuel for heating apartments.

In 1904 , the steam sawmill Sokoliki GmbH was founded in Bremen together with the open timber trading company W. Escher from Krefeld . In the Sokoliki steam sawmill, which is equipped with six gates, 37 kilometers of railroad tracks were laid to transport the felled trees from the adjacent valleys, and round and sawn timber was transported with four steam locomotives and 84 wagons for the company's own account and that of others. With this Schreyer railway company, beech lumber, and at that time also the popular beech firewood, were mainly brought to the German market via Sokoliki.

On December 19, 1906, the sawmill of the German-American Lumber Company in Millville burned down completely and was immediately rebuilt using the latest technology. New capital was needed. The Princely Schaumburg-Lippische Hofkammer of the Principality of Schaumburg-Lippe gave Fr. Julius Schreyer in Bremen a high-interest loan.

On January 1, 1908, the two authorized signatories Theodor Poppe (1878–1934) and Eduard Lutz (1880–1929) became partners in the general partnership Fr. Julius Schreyer in Bremen. In 1910, Friedrich Julius Schreyer's nephew, Eduard Lutz, quit and went into business for himself in Pensacola. He traded and shipped the somewhat inferior sawn timber from the German-American Lumber Company to the ports of the Caribbean on his own account . He founded his own shipping company, Lutz Shipping Co Incorporated in Pensacola, later New York. His successor as a partner in Fr. Julius Schreyer in Bremen is Hermann Gottlieb Kulenkampff (1878–1945). An internationally trained businessman who previously worked mainly in the USA. His father was Dietrich Kulenkampff, a surgeon and chief physician at the deaconess house in Bremen. His uncles were the partners of the Kulenkampff brothers , the successful Bremen tobacco traders for raw tobacco.

Another sawmill was purchased in Fountain , Florida. In 1913, 52 shiploads were loaded from Millville and Pensacola. The managing director Mrs. Julius Schreyer in Bremen and Pensacola developed into one of the most important unloaders of Pitchpine for all of Europe.

In 1913 the ruling Prince Adolf zu Schaumburg-Lippe from Bückeburg bought 50 percent of the company with his Princely Schaumburg-Lippische Hofkammer. The Bremen partner Hermann Kulenkampff became president of the German-American Lumber Company , HH Boyer and Friedrich Julius Schreyer the vice-presidents. Over 300 people were employed in the sawmill and planing mill in Millville. A railway operation with 145 kilometers of railroad tracks was maintained with seven steam locomotives and 80 wagons. This included around 300 houses and accommodation for the workforce, warehouses, workshops, our own theater, a “moving picture show” with 800 seats, a hospital, the two-story Germania Hotel, a modernized drying plant for the wood, seven cars and trucks and one very modern drug & confectionery. The registered land ownership alone was 720 km² of forest. The rights of use had been secured for a further 568 km². In total, a forest area of ​​1,288 km² was controlled. In comparison, that is three times the area of ​​the state of the Free Hanseatic City of Bremen.

Virtually all of Millville, now a district of Panama City, Florida, then belonged to Fr. Julius Schreyer .

The German-American Lumber Company had a paid-up capital of one million dollars and in 1918, when it was foreclosed by the US government, still had a book value of four million dollars. The managing director Hermann Kulenkampff and Eduard Lutz, who lives in Pensacola, were taken prisoner of war as German merchants as German merchants and were interned in Fort Oglethorpe, Georgia, on October 6, 1917. The sawmill and the entire German property was confiscated and transferred to the newly created US agency Alien Property Custodian under the direction of Alexander Mitchell Palmer (1872-1936).

Palmer, together with his 24-year-old assistant, the later famous J. Edgar Hoover (1895–1971), developed and staged a politically appropriate smear campaign against the German-American Lumber Company , which was published in all major American newspapers. This is despite the fact that at the time of publication all business documents were already fully accessible and in the possession of the American authorities and the documented transactions prove exactly the opposite of the press campaign. The company's business records have been in the archives of Florida State University since 1956 .

Palmer, as a trustee of enemy property, describes on May 29, 1918 in his lecture to the Chicago Lawyers' Association that the German-American Lumber Company in Millville was a purely German spy center. A dummy operation would have been maintained for this purpose only. It was planned that the Germans would use the natural harbor of St. Andrews Bay as a naval base in order to prepare an invasion of all of America with their submarines. From the Panama Canal , Panama City is the shortest distance to reach Chicago. As the emperor's nephew, a German prince would have invested millions in the company. Income was only used to buy more land. The sawmill itself was only a cover for this operation. This is "a clear and completely clear fact". This sentiment made waves throughout the United States and received a lot of attention in its time.

On March 10, 1919, the foreclosure auction of the American Lumber Company , renamed for political reasons, took place.

The Fr. Julius Schreyer in Bremen was not informed. Hermann Kulenkampff was still imprisoned in the internment camp. The entire plant and operations were jointly auctioned by the American merchants Minor Cooper Keith, co-founder and partner of the United Fruit Company , and the lumberman Walter C. Sherman. In April 1919 Hermann Kulenkampff was released from captivity to Germany.

The First World War destroyed Friedrich Julius Schreyer's life's work. The steam sawmills in Galicia and the property in Pensacola were expropriated. His company in Bremen was cut off from international sources of supply for the raw material wood. The German domestic market was totally shattered.

At the urging of the younger partners, the tobacco and coffee shipping branch was added to the wood commissioning division in 1920 and merged into Schreyer & Co GmbH . Friedrich Julius Schreyer brought his entrepreneurial experience as a shareholder and member of the supervisory board to Bremer Holzindustrie AG, which he co-founded in 1910, one of the first furniture productions on a truly industrial scale, which was dissolved by JF Schröder Bank KaA , Bremen, during the global economic crisis in 1929 .

Friedrich Julius Schreyer was married to his childhood sweetheart Christiane Katharine Molly, née Schmidt from Hildesheim. The marriage remained childless. In his private life he was a passionate hunter. In Zeven he set up his hunting ground in the old forester's house. Even today his pheasantry is well known in Zeven and has meanwhile become a common field name. Between 1926 and 1935, he set up and financed a poultry farm for his adopted niece Inge Busch in Marßel ​​21 in Burgdamm, today a section of the motorway towards Bremerhaven, before the exit to the Ihlpohler Kreisel. He was the first owner in Bremen of a Horch 8-cylinder. From the model that was once presented to Kaiser Wilhelm II in person.

The economic pioneer Friedrich Julius Schreyer died on June 18, 1932 during his stay in Bad Ems . He collapsed in the middle of the Bad Ems bridge. He was buried in the Riensberg cemetery in Bremen. Theo Poppe died of his partners in 1934, Ludwig Bruhn and Hermann Kulenkampff died during the Second World War. There were no heirs or successors who could have taken over the company. In addition, with the inferno of the destruction of Bremen, the offices burned out completely and with the death of the shareholders and business partners, the old international business relationships were also destroyed.