from Wikipedia, the free encyclopedia
This is the sighted version , which was flagged on April 15, 2021 . There is 1 pending change that has yet to be viewed.

Gerhard Fieseler at the aerobatic championships in Berlin-Tempelhof in 1931

Gerhard Fieseler (born April 15, 1896 in Glesch ; † September 1, 1987 in Kassel ) was a German aircraft designer who made a name for himself in the First World War as a fighter pilot , later as an aerobatic pilot and industrialist in the air armaments industry ( Gerhard Fieseler works ) .

Gerhard Fieseler was the son of from Koblenz coming typesetter August Fieseler Fieseler and Catherine (nee Marx) in Glesch to the world. He spent his childhood from the age of 6 in Bonn , where he worked in the “Aug. Fieseler Buchdruckerei ”helped out his father. Even at a young age, his urge for technical perfection and the passion for flying became apparent through the construction of numerous model airplanes . At the beginning of the First World War , Fieseler was rejected as a volunteer by the aviation replacement departments in Berlin-Johannisthal and Butzweilerhof near Cologne . Due to a lack of available pilots, he was accepted into the military flight service in 1915, but crashed during flight training and was injured so severely that he could not be released from hospital until February 1916. In October 1916, Fieseler was assigned to Aviation Department 243 and later to Aviation Department 43 . After retraining to single-seat aircraft types, he was relocated to Macedonia to Jasta 25 in May 1917 . On August 20, 1917, Gerhard Fieseler won his first aerial victory in the fight against a Nieuport 17 south of Prilep . He first reached the position of officer deputy . By the end of the war he had achieved a total of 19 confirmed aerial victories, for which he was awarded the Golden Military Merit Cross in 1918 and promoted to lieutenant in the reserve for bravery in the face of the enemy .

Gerhard Fieseler with his F2 Tiger 1932 on a flight over Kassel. With this machine he won the Coupe Mondiale d'Acrobatie Aérienne in Vincennes near Paris in 1934 .

After the war, Fieseler first set up a printing company in Eschweiler , which he closed in 1926 so that, like many of his former comrades, he could devote himself entirely to aerobatics . He went to Kassel to work as a flight instructor at Raab-Katzenstein-Flugzeugwerke GmbH , in which he had participated as a GmbH partner. Fieseler claimed to have been involved with 20 percent, Raab names 2 percent. However, he was dismissed without notice in April 1927. He received his GmbH shares in the form of an airframe.

From 1927 he took part in aerobatic competitions, for which he trained at the Kassel-Waldau airfield . He developed a tank and carburetor system suitable for backflighting for his machine, a Raab-Katzenstein Schwalbe . At the Zurich aerobatic competition from August 12 to 21, 1927, he set a world record with this machine in inverted flight of 10 minutes 56 seconds. The safely controlled inverted flight allowed him to fly the first outside loop according to modern aerobatic standards. His strength lay in inventing new and increasingly difficult maneuvers, which brought him considerable success in competition with other European aerobatic pilots of his time, although only machines that were inferior in terms of performance were available to him. In 1928 he designed his own aerobatic plane , which was built by Raab-Katzenstein, the Fieseler F1 . The aerobatic figure Rollenkreis , classified as difficult, was flown by him for the first time.

After the bankruptcy of Raab-Katzenstein, Fieseler bought the factory Segelflugzeugbau Kassel from the fortune created by aerobatics , which he renamed Fieseler Flugzeugbau on April 1, 1930 (from April 1939 Gerhard-Fieseler-Werke ). On one of his new aircraft designs, the Fieseler F 2 Tiger , with which he was the first to introduce the symmetrical wing in aerobatics, Gerhard Fieseler won the Coupe Mondiale d ' on June 9 and 10, 1934 in Vincennes near Paris, which is regarded as the first world aerobatic championship . Acrobatie Aérienne , in which nine aerobatic pilots from seven European countries took part. After this success, in which two of his colleagues were killed, Fieseler gave up aerobatics and invested the prize money of 100,000 francs in his company.

These achievements, together with the introduction of many advanced aerobatic maneuvers, make Fieseler the founding father of modern competitive aerobatics. The aerobatic figure Turn is still called Fieseler in English today . 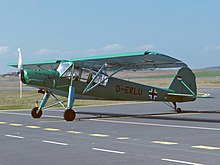 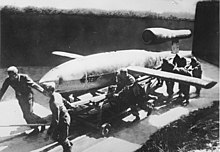 Benefiting from Fieseler's membership in the NSDAP and his appointment as military economic leader , the Fieseler works were able to win important orders for the armament of the newly founded air force . Fieseler was not an aircraft designer himself, but as the owner he had a decisive influence on the design specifications, especially in the project planning phase for new machines. However, he personally carried out the first flights.

The most famous aircraft was the Fieseler Storch , which was created on the basis of an order from the Reich Aviation Ministry (RLM). Due to the excellent slow flight and STOL properties, this model won the tender for a new Air Force liaison aircraft . A total of 2549 copies of this aircraft were built by the end of the war.

Other well-known aircraft that Fieseler produced under license, among others:

Gerhard Fieseler was deposed as operator of the Fieseler works on March 29, 1944 because the production figures required by the Air Force were not achieved. At times, more than 10,000 workers, including thousands of Dutch forced laborers , were employed in the three Fiesel plants in Kassel. Fieseler's career in the service of National Socialism is viewed critically today despite the complete relief of his person in the denazification process .