An old house from the colonial times under the lush vegetation, despite significant decay, still inhabited to this day.

Grand-Bassam (also in German: Groß-Bassam ) is a port city on the Ivory Coast on the Atlantic coast ( Gulf of Guinea ), about 40 kilometers east of Abidjan . The city, with a population of almost 84,000 today, was the most important city in the Ivory Coast colony during French colonial times. Because of its well-preserved architecture from this period, it has been a UNESCO World Heritage Site since 2012 and is also popular with tourists and residents of nearby Abidjan because of its beaches. 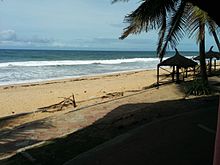 Grand-Bassam is located in the southeast of Ivory Coast on the shores of the Atlantic Ocean in the Grand-Bassam department , which belongs to the Sud-Comoé region of the Comoé district. It borders in the north on the municipalities of Bingerville (in the autonomous district of Abidjan ) and Alépé (in the region of La Mé ), in the east on the municipality of Bonoua , in the south on the Atlantic Ocean and in the west again on the autonomous district of Abidjan (with the municipality of Port -Bouët ).

The Ébrié lagoon divides the city into two parts:

The ground is flat and sandy, apart from a few more or less swampy shallows, the vegetation of the municipality is a savannah interspersed with trees. There are coconut palm plantations along the coast.

The sub-prefecture of Grand-Bassam is determined by the Atlantic Ocean and three other watercourses: the Ébrié lagoon, its branch, the Ouladine lagoon, on which the lighthouse is located, and the Comoé river , which has its source in Banfora in Burkina Faso .

The climate is rainy. There are four seasons:

Young girls from the Grand-Bassam area, drawn by the first French explorer, published in 1869.

There are several theories as to the origin of Bassam's name. According to Professor Niangoran Bouah, ethno-sociologist, Bassam was not a place name. On the one hand, it could come from the N'Zima word Bazouam , which is a cry for help. A N'Zima woman would have called it to a European who thought it was the name of the place. The second thesis goes back to the language of the Abouré . From the word Alsam (Abouré for: evening twilight), Abassam and later Bassam developed through linguistic convenience . Niangoran Bouah tends to admit that the second thesis is more likely.

From 1470 the Europeans first made contact with the populations of the littoral of the Ivory Coast. In 1469 , Soeiro da Costa , a Portuguese navigator, was the first known European to land in the Grand-Bassam area before continuing on to Elmina on the Gold Coast (now Ghana ). Between 1470 and 1471, João de Santarém and Pêro Escobar docked on the Ivory Coast for the first time. Ivorian city names such as Sassandra , San-Pédro or Fresco still remind of this today.

The man hunts as part of the slave trade in the Gold Coast led to a migration movement to the Ivory Coast in the 17th century . Abouré settled in the area around the river Bia and up to the Aby lagoon. They founded the villages of Dibi, Aboisso, Wessebo and Ahakro, the first capital of the kingdom founded by King Aka Ahoba , the leader of the Abouré migration.

The Agni-Brafé, founders of the Sanwi Kingdom , conquered the Abouré territory in the 18th century. These withdrew from the Bia to their current habitat in the south-east of the coastal area. There they split into three groups: the marriage of the village of Moossou, the Ehive of the Bonoua villages and the Odjowo and Ossouen (or Eblapoue) of the village of Ebrah. According to all sources, the Abouré, a subgroup of the Ashanti , originally came from the Gold Coast.

Later, around 1840, they were joined by the N'Zima, also from present-day Ghana. Coming from the same region of origin, they made marriage alliances. The N'Zima (or Appolias) populated the areas of what is now the Petit Paris , France and Azuretti districts . The indigenous population of Grand Bassam is still made up of Abouré and N'Zima. You were the first to have contact with the Europeans.

A few years later, Ehotilé settled on the island of Vitré and divided into two groups that populated the villages of Vitré 1 and Vitré 2 .

According to some sources, the Grand-Bassam area was discovered by the French explorer Marcel Treich-Laplène . Others write that Treich-Laplène only came here in 1893, when Fort Nemours had existed for decades and had been under the command of Arthur Verdier for 13 years .

After a contract had been concluded on February 9, 1842 between an influential Abouré called Attekebele, called King Peter and Lieutenant de Vaisseau Kerhallet, the city of Grand-Bassam was founded for the French by Admiral Méquet. It became the capital of the Ivory Coast colony in 1893 with Louis-Gustave Binger as the first governor . It is the first prefecture of the French colony. When a yellow fever epidemic broke out in 1896 , Binger initiated the relocation of the colonial administration further west to what is now Bingerville .

The jetty at the turn of the century on a postcard sent in 1907 shows the violent surf, which makes it impossible for ships to dock on the bank.

The Grand Bassam wharf ( le wharf ) was the first port facility in the Ivory Coast. Construction began in 1897. The approximately two hundred meter long bridge overcame the surf and allowed the ships to dock safely. When a second jetty was opened to traffic in 1923, it happened at just the right time, because the old one sank in the waves in a storm. A year earlier, 76,000 tons of goods had been reloaded. In the next ten years this remained the only deep sea port in the colony, which reached its capacity limit in 1929 with 172,000 tons of handling. The capacity was finally doubled by the jetty in Port Bouët, which was built in the same year but not put into operation until 1931 . However, Grand-Bassam remained an important port city before the Abidjan deep-sea port opened in 1950. Remains of the landing bridge from 1923 are still considered a sight today.

The city's lighthouse was built in 1915, other sources mention a year earlier than the year of construction. It has a height of twenty-four meters and consists of block masonry plastered with lime and painted white, which is closed off by a gallery and the lantern. Obviously the plaster has fallen off in most places. The last evidence of the operation comes from the Second World War . After that, the beacon appeared to be out of service from the 1950s to the 1970s. The tower stands on a strip of land between the Atlantic Ocean and the Ouladine lagoon. The focal area is 32 meters and the light comes on every five seconds. The location of the tower is accessible, but the tower itself is not.

Today the city is a tourist resort and the seat of the Bishop of Grand-Bassam , one of the two suffragan dioceses of the Archdiocese of Abidjan with the Cathédrale Sacré-Cœur de Grand-Bassam from 1910.

In attacks on March 13, 2016 , al-Qaeda terrorists shot dead 14 tourists on and near the beach in the Maghreb .

The historic old town of Grand-Bassam was included in the UNESCO World Heritage List in 2012 as an outstanding example of a colonial city from the late 19th and early 20th centuries with districts planned for special needs, such as trade, administration and separate residential areas for Africans and Europeans, based on the principles of functionalism and hygiene, taking into account the climatic conditions. Some of the buildings are in poor condition and threatened with further deterioration. The fishing village of N'zima is part of the World Heritage area .

The outstanding buildings include the Officers' Mess , the Governor's Palace, the Palace of Justice from 1911, the Hôtel des Postes et Douane , the complex of the Catholic Church and the Maison Ganamet .

The club Moossou FC plays for the 2015/16 season in the top Ivorian league, another club is USC Bassam . Both clubs play their games in the stade municipal de Bassam with a capacity of 3,000 .

Administrative division of the Sud-Comoé region