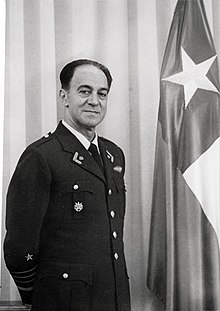 Gustavo Leigh Guzman (born September 19, 1920 in Santiago de Chile ; † September 29, 1999 ibid) was a Chilean lieutenant general and politician who was Commander-in-Chief of the Air Force ( Fuerza Aérea de Chile ) and its representative during the military dictatorship under Pinochet between 1973 and 1978 was in the military junta. He was considered one of the main rivals of dictator Augusto Pinochet .

After attending school in 1940, Leigh entered the military school (Escuela Militar) as a cadet and shortly thereafter switched to training at the Air Force School (Escuela de Aviación) , which he graduated as a lieutenant in 1942 . He was then used between 1942 and 1945 as a bomber pilot with Fliegergruppe 4 at the air force base in El Bosque . In 1943 he also took part in an air defense course in the Panama Canal Zone and was promoted to first lieutenant in 1944 . He worked as an instructor at the Air Force School from 1945 to 1952 and was promoted to captain in 1948 .

Leigh then completed training to become a supply officer and pilot on helicopters from Bell Helicopter at the US Air Force's Francis E. Warren Air Force Base in Cheyenne between 1952 and 1953 . After his return to Chile he was promoted to major and in 1955 deputy commander of hunting group 11 in Quintero , before he was promoted to lieutenant colonel and appointed commander of this hunting group in 1958 .

In 1960 Leigh went back to the United States , where he was head of the military mission in Washington, DC and then promoted to colonel on his return in 1966 . In this rank he became Secretary General of the Air Force and later until 1971 Director of the Air Force School. 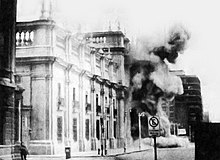 On Leigh's orders, the La Moneda presidential palace was bombed during the military coup on September 11, 1973

After his promotion to brigadier general , Leigh was Chief of Staff of the Air Force and Commander of El Bosque Air Force Base in 1971.

After the resignation of General César Ruiz Danyau , Leigh was promoted to major general on August 18, 1973 and appointed as his successor as Commander in Chief of the Air Force.

During the military coup by General Augusto Pinochet against President Salvador Allende , he ordered on 11 September 1973, the bombing of the presidential palace La Moneda in Calle Tomás Moro and six radio stations in Santiago de Chile with fighter aircraft of the type Hawker Hunter on. He then had the Official Notice No. 2 on the military coup in the Air Force Military Academy (Academia de Guerra de la Fuerza Aérea) in Las Condes .

Member of the military junta and suppression of political opponents

Thereafter, Leigh was appointed lieutenant general and a member of the military junta, which he belonged to July 24, 1978.

Within the military junta he was considered the most influential figure and was best known for his saying “We must eradicate Marxist cancer” ('Hay que erradicar el cáncer marxista') , in which he called on Chilean citizens to be opponents of the junta and supporters of the former president To betray Allende. Under his command, the air force cracked down on internal left opponents.

In February 1974 he ordered the establishment of the First Court Martial (Consejo de Guerra 1) of the Air Force, chaired by General José Berdichevsky . This imposed eight officers the death penalty for sedition (delito de sedición) , including the Brigadier General of the Air Force, Alberto Bachelet Martínez , of Allende during the tenure of President Director was of the Office of supply and prices. The father of the future President Michelle Bachelet , who remained loyal to Allende , was arrested and tortured by officers of the military police before he finally died in the correctional facility in Santiago de Chile. Other victims of this court were Colonel Carlos Ominami, commander of the anti-aircraft artillery regiment in Colina , the former senator of the Partido Socialista de Chile , Erich Schnake , and the former president of the State Bank (Banco del Estado de Chile) , Carlos Lazo.

Repressions by the secret services DINA, SIFA and DIFA

During his five-year membership in the military junta, Leigh maintained close relationships with the General Corps of the Air Force and also met regularly with officers of the SIFA (Servicio de Inteligencia de la Fuerza Aérea) who briefed him on operations and repression against the opposition. Tensions arose again and again between the SIFA, which reports to him, and the National Secret Service DINA ( Dirección de Inteligencia Nacional ) , which was officially founded in June 1974 under its director, Colonel Manuel Contreras . The rivalry between the two secret services, DINA and SIFA, became particularly evident during the first phase of centered repression against the Movimiento de Izquierda Revolucionaria (MIR), during which both organizations carried out arrests and assaults against opposition groups.

At the beginning of 1975 the new secret service DIFA (Dirección de Inteligencia de la Fuerza Aérea) was founded within the Air Force to replace the SIFA. It wasn't just a change in name: the main objective of the Air Force Intelligence Service was now the Partido Comunista de Chile and the Partido Socialista de Chile . The DIFA was subordinate to the General Staff of the Air Force and was obliged to report directly to the Commander-in-Chief.

To strengthen this organization, the Air Force also made use of civilians, many of whom had previously worked in far-right parties and nationalist groups, as well as external employees of the previous SIFA. Ultimately, at the initiative of the Luftwaffe, a counter-organization to DINA was created at the end of 1975, the so-called "Joint Command" (Comando Conjunto) , which consisted of employees of the Air Force, the Carabineros and the Navy, but also civilians, and which later split after the end of the military dictatorship had to answer in court. The Comando Conjunto had its own centers for detention, interrogation and torture. This organization's operations center, known as Remo Cero, was located at Colina Air Force Base in a Carabineros building.

According to an interview with Leigh in 1988, the head of the military junta, Augusto Pinochet, was responsible for the sole supervision of the DINA within the military junta. The director of DINA had to report to Pinochet every morning and received the relevant instructions from him. He himself denied any responsibility for DINA and had no doubt that Pinochet was solely responsible for DINA and its actions. At the beginning of 1976 300 SIFA employees were subordinated to DINA to support their operations and imprisonment, so that Leigh denied responsibility for the repression that took place after the beginning of 1976.

During his five-year membership in the military junta, Gustavo Leigh became the main rival of dictator Augusto Pinochet

Right at the beginning of the military junta, the differences of opinion between Leigh and Pinochet also grew: firstly because of the constitution of Chile planned by the military junta and secondly because of the return of power to a civilian government. There were also differences of opinion regarding the economic policy measures that Pinochet and his economic policy advisors, the so-called "Chicago Boys", were taking. According to Leigh, Pinochet saw the army and independent companies as the most important and powerful pillars of the country and therefore tried to keep power for as long as possible after the military coup of September 11, 1973.

Leigh, on the other hand, insisted from the start on the need to set a fixed date for a return to democracy , and criticized Pinochet's sole claim to power. In this context, a constitutional commission (Comisión Constitucional) was formed on September 25, 1973 , to which the lawyers and politicians Enrique Ortúzar , Sergio Diez , Jaime Guzmán and Jorge Ovalle belonged. The commission, chaired by the former Minister of the Interior, Justice and Foreign Affairs, Ortúzar, drew up proposals for reforms based on the 1925 constitution . However, the commission failed to convince the critics with its views, so that Pinochet finally took control of the constitutional commission under the new chairman and former president Jorge Alessandri , which finally drafted the 1980 constitution.

After retiring from active military service, Leigh moved into the private sector and worked as a real estate agent. His partner in the real estate business was the former director of the DIFA Air Force Intelligence Service, General Enrique Ruiz Bunger .

In 1986, the later judge at the Supreme Court of Chile, Carlos Cerda Fernández , named 40 people, including 32 members of the Air Force, because of their involvement in the imprisonment and disappearance of 12 communist politicians. These included numerous important people from the Comando Conjunto , but also General Gustavo Leigh. Some time later, however, the Supreme Court finally overturned a conviction of Leigh, stating that it would fall under the Amnesty Act (Ley de Amnistía) . However, he said in the trial for the assassination of the president of the public service union ANEF (Agrupación Nacional de Empleados Fiscales) , Tucapel Jiménez , whom he met the day before his assassination on February 25, 1982. He also explained to judge Juan Guzmán Tapia that the DINA depended solely on Pinochet's authority.

Leigh was married twice and has six children. On March 20, 1990, he was seriously injured with a gun and lost an eye. He died of complications from a myocardial infarction . One of his pallbearers was one of his confidants during the time of the military junta, the former head of operations of the CNI Central National Intelligence Service, Álvaro Corbalán Castilla.