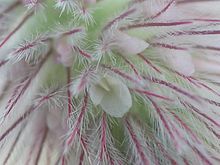 Section of an inflorescence 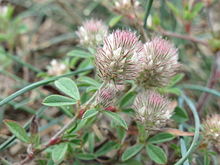 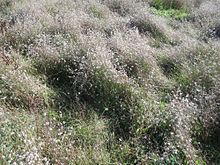 The hare clover is an annual herbaceous plant that reaches heights of 10 to 30 centimeters. The stem is upright and often branched expansively. The plant parts are usually very hairy. The hare-clover often has a fairly long taproot . The alternate leaves are arranged in a petiole and a leaf blade. The pinnate leaf blade is fingered in three parts. The three gray-green leaflets are relatively narrow. The stipules are tapered from a lance-shaped basic long subulate. The petiole is often hidden between the stipules.

The hare clover can be easily distinguished from the other clover species by the pink-red, hairy, head-shaped inflorescences. The flowering period is from June to July. The long-stemmed, head-shaped inflorescences of the hare-clover are about 1 cm wide and 1 to 2 cm high. The flowers are sessile. The hermaphrodite flowers are zygomorphic and five-fold with a double flower envelope . The five sepals are fused to form a 5 to 7 mm long, long shaggy hairy and reddish calyx. The five petals are not all fused, they are initially white, later pale pink. The corolla has the typical shape of the butterfly flower and is shorter or at most as long as the calyx. This creates the characteristic pink-red and shaggy appearance of the flower heads. Nine of the ten stamens have grown together.

The hare clover is a therophyte . It is rooted up to 40 centimeters deep.

From an ecological point of view, these are nectar-bearing butterfly flowers with a folding mechanism. The pollination is done by bees and bumblebees , rarely by butterflies , sand wasps and flies ; spontaneous self-pollination is also successful.

Diaspores (unit of spread) are initially the legumes encased in the conspicuously feathery hairy calyxes; these serve as a flight organ and are pronounced coppers. Since the hair performs hygroscopic movements, adhesion spreading is also possible. Later the seeds are released and so continue to spread.

The hare clover is a European-West Asian floral element . It occurs almost all over Europe and around the Mediterranean . The area of the hare clover stretches from northwestern Africa in the south to Great Britain and Scandinavia in the north; to the east, its distribution area extends to southern Russia , western Siberia , and northern Iran . The hare clover is a neophyte in large parts of the world .

After Ellenberg it is a light plant, a Trockniszeiger, nitrogen-poorest locations indicating and Central Europe a class characteristic species loose sandy and rocky grasslands (Sedo-Scleranthetea). But it also occurs in societies of the Aperion association or in incomplete societies of the Festuco-Brometea class, but in the Mediterranean region it is a species of the order Helianthemetalia guttati.

Trifolium arvense belongs to the sub-section Arvensia from the section Trifolium in the genus Trifolium .

Origin of name and use

The name hare clover (or hare clover), formerly also called λαγώπποους in Latin and Leporis pes ("hare's foot") in Latin, is intended to express that this type of plant is not suitable as a fodder for livestock , but "only for rabbits ". In fact, cows disdain the hard and bitter stems. The hare clover contains tannins and is avoided by farm animals because of the hard and bitter stems (low feed value). It is popularly referred to as a field clover, cat's clover and mouse clover, as well as, because of its anti-diarrhea effect, as a “stuffing ass”.

The hare clover is also used as a medicinal plant. Because of its tannins , it should not be consumed in large quantities. In antiquity and the Middle Ages, Leporis pes was used "to loosen the stomach" and ( Ad profluvium mulierus ) to induce menstrual bleeding.

The hare clover is recommended for dry bouquets, as the calyx hairs give the flower heads a decorative, kitten-like appearance. The hare clover is suitable as an ornamental plant for wild plant gardens on silicate soils .