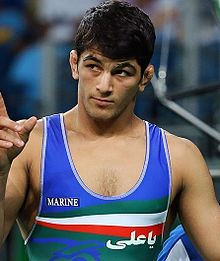 Hassan Yazdanicharati started wrestling as a teenager in 2006. He concentrates on the free style. He was or is trained by Hossein Naghibi, Mahmoud Esmaeilpour and Mohammad Talaei. As a junior, he was already part of the Iranian elite and was first used in an international championship in 2011 at the Asian Junior Championship (age group Cadets). At that time he weighed just under 50 kg and therefore started in the weight class up to 50 kg. He reached 3rd place and won his first medal. A few weeks later he started at the Junior World Championships (Cadets) in Szombathely in the same weight class and reached the final battle, in which he lost to Gadschimurad Raschidow from Russia.

Then it came back to an international championship, the Asian Junior Championship in Ulan-Baatar, after a long break. There he won the title in the weight class up to 66 kg. In the same year he was also junior world champion in the same weight class in Zagreb ahead of the Americans Aaron Pico and Daichi Takatani from Japan.

In 2015, Hassan Yazdanicharati proved himself at several major international tournaments, in which he either won or finished 2nd. He was then used at the 2015 World Championships in Las Vegas in the weight class up to 70 kg. He justified the trust placed in him with victories over Jung Young-ho, South Korea, Miroslaw Kirow, Bulgaria, Dawit Tlachadze, Georgia and James Green from the United States. In the final battle for the world title, however, he had to surrender to the Russian Magomedrasul Gasimagomedow , so he became vice world champion.

In 2016 he also qualified for a start at the Olympic Games in Rio de Janeiro in the weight class up to 74 kg. After victories over Asnage Castelly from Haiti, Soner Demirtaş , Turkey and Galimchan Usserbajew, Kazakhstan, he faced the Russian Aniuar Gedujew , who had previously eliminated the high favorite Jordan Burroughs from the United States , in the final for the gold medal . In a highly dramatic fight, which had to be interrupted several times because of a gaping eyebrow injury by Aniuar Geduev, it was 6: 4 for Geduev until a few seconds before the end of the fight time. In literally the last second, however, Hassan Yazdanicharati managed to score a two-point score, with a tie of 6: 6. Since he had achieved the last rating, he was the winner of this fight according to the applicable regulations and thus a gold medalist.

In 2017 he switched to the weight class up to 86 kg. On 16./17. In February 2017 he was part of the Iranian team at the Team World Cup in Kermandshah. In the preliminary rounds he defeated Serdar Böke from Turkey and Unurbat Purejav from Mongolia. In the final battle, which Iran won 5-3 over the United States, he suffered a surprising defeat on the shoulder against David Taylor in 5.05 minutes. It would be his only defeat in 2017.

In May 2017 he won the Islamic Solidarity Games in Baku in front of Vice World Champion Selim Yaşar from Turkey and Sharif Sharifow from Azerbaijan and in July 2017 he was also Iranian champion ahead of Alireza Karimimachiani. At the World Championships in Paris he then showed a fantastic performance. He won four of his five fights early because of technical superiority (at least 10 points ahead). Only the Russian Wladislaw Waliew was able to keep his defeat against him in the semifinals with 0: 4 points within limits. The world title was the reward for Hassan Yazdanicharati's outstanding performance.

In March 2018 Hassan Yazdani became Asian champion in Bishkek and in August 2018 in Jakarta he was also the winner of the Asian Games, each in the weight class up to 86 kg body weight. At the 2018 World Cup in Budapest, however, he was unable to continue his winning streak. He lost in this championship already in the qualification against the US-American David Morris Taylor, who had hardly appeared in international championships, on points. Since Taylor reached the final, Yazdani was able to continue wrestling in the consolation round, where he secured a bronze medal with victories over Hadschi Rajbau, Belarus, Yurieski Torreblanca Queralta, Cuba and Dauren Kurugliew, Russia.