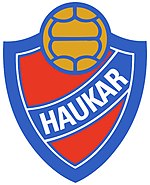 Haukar Hafnarfjörður is the name of an Icelandic sports club from Hafnarfjörður . The club is best known for its handball department .

The club was founded as Knattspyrnufélagið Haukar (German football club Die Habichte ) on April 12, 1931 by young men from the YMCA Hafnarfjörður.

In the EHF Champions League , the club played:

In the 2000/01 season, Haukar was able to record his greatest international success by moving into the semifinals of the EHF Cup .