Fram Reykjavík ( Icelandic Knattspyrnufélagið Fram 'football club forward' ) is an Icelandic sports club from Reykjavík . The official club colors are blue and white, the venue has been the Framvöllur stadium in the Reykjavík suburb of Úlfarsárdal since 2015. Fram had previously played in Iceland's Laugardalsvöllur national stadium since 1960 .

The club was founded on May 1, 1908 and is one of the oldest football clubs in Iceland after the Icelandic record champions KR Reykjavík . 1914 FR Fálkinn Reykjavík and 1915 KF Reykjavík were incorporated into the association.

In the early years, the club dominated the top division founded in 1912 with six successive championships from 1913 to 1918. In its more than 100-year history, Fram Reykjavík played most of the time in the first Icelandic football league. Only in 1928, 1966, 1983, 1996 and 2006 did they play in the second division after being relegated, but always managed to get promoted immediately. Successes could also be celebrated internationally: for example, in the 1985/86 European Cup Winners' Cup, after a 3-1 and a 0-1 victory over the Northern Irish representative Glentoran FC, they entered the second round. There they failed, however, at the Austrian record champions Rapid Vienna . The greatest success in the club's history came in the 1990/91 season in the same competition: after the Swedish team Djurgårdens IF sensationally defeated 3-0 and 1-1, they faced FC Barcelona in the second round . Although they even scored a goal in the first leg, Fram was eliminated 1: 2 and 3: 0.

A certain reputation gained the club in Germany when he was in the preliminary round of the UEFA Cup in 1992/93 on the 1. FC Kaiserslautern met. However, Kaiserslautern clearly won both the first and second leg with 3-0 and 4-0 respectively.

In the 2008 season, the club reached 3rd place in the league and was thus able to qualify for participation in the 2009/10 UEFA Europa League . There, after two wins against The New Saints FC from Wales, they reached the third qualifying round. After a remarkable 1-1 draw at Sigma Olomouc , the Czech first division side lost 2-0 at home in the second leg.

In the 2009 season, the club was defeated in the Icelandic cup final against Breiðablik Kópavogur 6: 7 a.s. (2: 2 a.s.) while they finished the league in fourth and thus just missed qualification for the international competition.

In 2014, Fram relegated to the 2nd Icelandic Football League, in which the club has played since then. 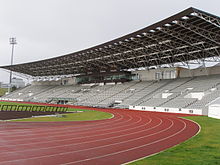 1Both games at the Empire Stadium Gzira
2The second leg took place in Chorzów .