Main news center of the Ministry of National Defense

Staff building (4-storey prefabricated building) of the HptNZ, right polyclinic of the MfNV

Cross-section of the HptNZ bunker under the asphalt surface, picture above.

The main message center (HptNZ) was a telecommunications facility with regimental status of the Ministry of National Defense (MfNV) and the Ministry of Disarmament and Defense (MfAuV) of the National People's Army of the GDR. It was subordinate to the chief of the main staff of the NVA and was professionally led by the chief of the news administration in the MfAuV / MfNV. She was deployed in Strausberg Nord within the boundaries of the MfNV.

The task of the main news center consisted of securing all types of communication connections for the leadership, interaction, warning and notification for the ministry, its operational command center and all departments at the Strausberg site . As an independent agency, it was deployed directly in the area of ​​the barracks of the ministry . Their technical basis consisted of the Strausberg and Kagel news bunkers .

The bunker in Strausberg was built as part of the GDR's first bunker building program in the 1970s and went into operation in December 1979. It was officially put into service by the Minister for National Defense on June 13, 1980. The bunker in Kagel is the first bunker built in the GDR from 1958–1962. It has been reconstructed several times over the years.

Both bunkers represented the MfNV's message center - the last code name was “Vostok” . In the NVA's secretly prepared message system for the event of war , the headquarters played a dominant role, was integrated into all active and passive message networks of the NVA and connected to all central command posts .

In the implementation and fulfillment of these tasks, the main message center (HptNZ) of the MfNV was integrated into all communication networks (including: the command network, narrowband radio network , emergency and emergency telephone network, the networks of the armed forces, etc. as well as the tropospheric message system "BARS" ), operated communication links to a plurality of message centers (including the main executing body of the MfNV bunker Harnekop , the bunker complex 5000 , the Operational computer center of the NVA , the message center "RANET" the group of Soviet forces in Germany , with the tropospheric radio exchanges 301 , 302 and 303, the main command post Ticino the People's Navy of the GDR).

In preparation for the establishment of the unification of Germany, direct voice / data communication connections were established, maintained and operated in 1990 between the Ministry for Disarmament and Defense of the GDR in Strausberg and the Federal Ministry of Defense (BMVg) in Bonn . This was preceded by talks between the Head of the Main Intelligence Center on May 4, 1990 at the BMVg in Bonn with representatives of Staff Division VII, Telecommunications Services. This concerned both an open telephone and a VS-GEHEIM telex connection with the T-310/50 encryption device . The last-mentioned connection only existed for a period of four weeks. A corresponding set of equipment was transferred, installed and put into operation in the Tomburg barracks by members of the main intelligence center in Rheinbach, where it was then the Office for Telecommunications and Information Systems of the Bundeswehr (AFmISBw) .

The main news center had the status of a part of the news force or news regiment because it was on a par with a general regiment. Their battalions in the tactical sense were the individual elements referred to as headquarters. Officially, the main news center of the Ministry of National Defense of the GDR was assigned to the central facilities of the Ministry and was directly subordinate to it. 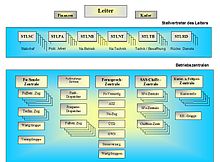 Structure of the main message center

The designations for the leadership, the deputies and their areas as well as the individual centers, which had to fulfill specific tasks according to their technical equipment, were adapted to the special features of an intelligence unit. With the elements, groups and crews assigned to them, they ensured the establishment, maintenance and operation of communications links and, in parallel, the exchange of information for the Ministry of National Defense as an operational technical service. The personnel for the news center in the Hubertusstock hunting lodge, which operated the center around the clock in shifts, and the MfNV command train were integrated into the position plan and equipment verification of the unit . The technical facilities themselves were part of the basic resources of the hunting lodge. Investments, technical maintenance and repairs were carried out by the main news center. In the preparation and implementation of political highlights in the Hubertusstock hunting lodge, the operating staff of the HptNZ was replaced by members of the Ministry for State Security .

Its development took place in dependence on that of the Ministry of National Defense , since its task has always been to ensure the security of information for the army command.