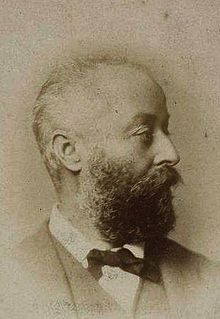 Henry Benedict Medlicott was the son of Samuel Medlicott (1796-1858), Rector of the Church of Ireland in Loughrea, and his wife Charlotte (ca. 1814-1884), daughter of Henry Benedict Dolphin . He was educated at Trinity College in Dublin as well as in France and Guernsey and received his BA with honorary degree from the School of Civil Engineering in 1850 and an MA in 1870 . He was fluent in French and was familiar with the work of French geologists.

In 1851 he joined the Geological Survey of Ireland , in 1853 the British Geological Survey . He first worked with William Talbot Aveline in Wiltshire , but was later joined by Dr. Thomas Oldham enlisted for the Geological Survey of India and worked in the Rajmahal Hills near Bhagalpur . In August 1854 he left England and became Professor of Geology at the University of Roorkee , where he stayed until October 1862. During his time in Roorkee he researched parts of the Narmada Valley and Bundelkhand (1854/55 and 1856/57), worked on research into the geology of the Upper Himalayas and the Siwalik Beds , a fossil-bearing rock layer in the Siwaliks . In 1857 he served as a volunteer in the Roorkee garrison against the insurgents of the Indian uprising of 1857 , and received the Indian Mutiny Medal for his special services .

On October 27, 1857, he married Louisa Maunsell in Landour , with whom they had three daughters and three sons. Louisa was the daughter of Reverend Daniel Henry Maunsell, Vicar in Balbriggan , County Dublin .

Together with his brother JG Medlicott, he examined the Cambrian of the Vindhyagebirge and was able to work out the differences to the Cambrian of Gondwana . The name Gondwana is said to come from him (1872, originally for layers of the Permian in North India and after Sanskrit for forest of the Gond ), later transferred by Eduard Suess to the supercontinent Gondwana after the Glossopteris flora of the layers that are found on many Found continents. Later he worked in various areas of India, for example in South Rewa , Bihar , Assam , in the Khasi Mountains , Rajputana , Kashmir , the Satpura chains and the Garo Mountains . On April 1, 1876, he succeeded Dr. Oldham as head of the Department of Geology , his place of employment was Calcutta . In 1885 the title associated with the position was changed from superintendent to director.

In 1877 he was elected Fellow of the Royal Society ( FRS ) - even if he never needed the title he was entitled to in correspondence - and in 1888 he was awarded the Wollaston Medal of the Geological Society of London . He was a Fellow of Calcutta University and between 1879 and 1881 President of the Asiatic Society of Bengal .