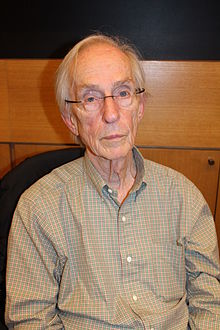 Howard Saul Becker (born April 18, 1928 in Chicago , Illinois ) is an American sociologist and jazz pianist . His book Outsiders is a classic of deviance and criminal sociology , his book Art Worlds is one of the most important publications in contemporary art sociology .

Becker's grandparents were immigrants from Lithuania , which was still Russian at the time , and his parents were born in Chicago. There he grew up in a middle-class household in which the arts had a high priority. From the age of 12 he learned to play the piano, his teacher was Lennie Tristano . At the age of fifteen Becker was already working as a jazz pianist in bars, clubs and strip bars and was hired for dance evenings, weddings and company parties. That was not only due to his musical talent, but also to the fact that most of the jazz pianists had been drafted into military service. Because he was able to skip a few years of school, he began studying at the College of the University of Chicago as early as 1943 , from which he completed his bachelor's degree in 1946 at the age of eighteen . He then initially aimed for a career as a professional musician, but then decided to continue his studies at Chicago University. He chose the subject sociology because he was fascinated by the prospect of being able to do field research on his own doorstep in the up-and-coming city . In 1949 he passed the master ’s examination, in 1951 he became a Ph.D. PhD . His master's thesis resulted from field research and participatory observation among dance musicians; his dissertation consisted of the evaluation of a research project on teachers in state schools. Both theses were supervised by Everett C. Hughes .

Becker lives in San Francisco with his second wife, whom he married in 1990, and spends about three months a year in Paris . The first honorary doctorates were awarded to him in France. His publications have always been promptly translated into French since the mid-1980s. The only introductions to his life and work that appeared before Dagmar Danko's work in German, and Becker's collections of essays available to date, appeared in French.

With his sociological work, Howard S. Becker, a student of Everett C. Hughes, follows the tradition of the original Chicago School of Sociology , but is strongly oriented towards symbolic interactionism , influenced by his second important academic teacher, Herbert Blumer . Becker is seen along with his friend Erving Goffman as the leading protagonist of a Second Chicago School .

In the early phase of his scientific work, Becker dealt (initially in the sense of the original Chicago School) with educational , professional and sociological topics. He then turned to deviance and criminal sociology and then to art sociology. This resulted in his most famous fonts, Outsiders and Art Worlds . In it, Becker questions current sociological concepts and introduces new ones. Work on the methods of qualitative social research and the sociology of science followed . He also dealt with documentary photography, examined the possibilities of photography for sociology and thus became a pioneer of visual sociology .

In the 1960s and 1970s, Becker was one of the defining figures in US sociology. During this time of upheaval, many conventions and certainties proved to be outdated and sociology also repositioned itself. He was instrumental in this. His work was widely received in France in the 1980s. Dagmar Danko explains it with the fact that a group of French sociologists who were looking for alternatives to the dominant Pierre Bourdieu turned to the Chicago school and that Becker is considered to be Bourdieu's antipode, especially in art sociology .

During his years as a “traveling researcher”, Becker worked for various institutions on research projects related to educational, professional and work sociology. He started from the definition of his teacher Everett C. Hughes, according to which "the study of institutions" is part of the "study of society in action". He analyzed schools and universities, focusing on the “lowest man in the system”. He did not interview principals, but teachers, not professors but students. He attached particular importance to the investigation of career paths and their contingency . In doing so, he outlined a theory that became known as the "Side Bet Theory".

"Side bets" are bets that are not directly related to the course of a game. According to the "Side Bet Theory", action is not taken automatically for the purpose of improving social status and other interests are also put aside when making decisions. As an example, Becker cites a person who starts a new position and who is soon offered an even better one, but who is rejected in order not to be considered unreliable. The self-commitment of teachers to certain schools, even if better jobs are in prospect, or the self-commitment of students to a course they have started, even though they originally had different curricula, speak for “side bets” in career decisions.

Becker himself did not investigate his theory empirically, but with its publication it triggered a whole wave of studies in which it was attempted to confirm or refute the theory. Between 1970 and 1980 at least 50 studies were devoted to Becker's self-attachment theory. This makes it one of his most discussed theses. In 1990, Aaron Cohen and Geula Lowenberg presented a meta-analysis of the relevant studies. Most authors then come to the conclusion that the “Side Bet Theory” cannot be proven with quantitative research methods. Jean E. Wallace, on the other hand, called for the theory to be revived in order to improve it methodically and then apply it.

Becker's most famous publication of his first sociological creative phase results from several years of participatory observation of medical students, which he undertook together with Blanche Geer . Boys in white. student culture in medical school (1961) is methodically based on the interactionist theory of action by George Herbert Mead . Becker built on this in his subsequent work and developed this scientific approach “a good deal further”.

→ Main article : Outsiders. On the sociology of deviant behavior

Outsiders. Studies in the Sociology of Deviance is Becker's first monograph and his best known and most influential work. It was included in the canon of "Major Works in Sociology". The book was published in 1963, and Becker had already published almost all of the articles it contained in his years as a “traveling researcher”: articles about marijuana users and jazz musicians who were still considered deviants in the USA in the 1950s. The presentation of divergent careers and Becker's theoretical conclusions from them was recognized by David Matza as an overdue heresy of the sociology of deviance.

With Outsiders , Becker shifted the social science perspective when analyzing deviance. The focus is not on the deviating action or the deviating person, but rather the definition of the action and the acting person as deviating by others. The subject of investigation is thus the social reaction. Dagmar Danko calls this procedure a “consistent application of Thomas theorem .” According to this, deviant behavior occurs when people understand it that way.

Becker's art-sociological analysis is theoretically also committed to symbolic interactionism. He does not understand art as the work of a single creator, but as an activity that is carried out collectively (interactively). The starting point is the social construction of artificial worlds ( Art Worlds ). By this he understands networks of individuals who cooperate with each other in elaborate forms in order to produce a work of art and convey it to the public. Their collective action requires material and other resources and is structured by conventions. He uses the credits of a Hollywood film as a demonstration object with its list of diverse functions and people. In general, Becker differentiates between artistic and supporting staff. An art world can be locally limited (e.g. a small experimental stage) or networked worldwide (e.g. the modern art business).

Art Worlds first appeared in 1982; On the occasion of the 25th anniversary, an extended edition was published in 2008 with a lengthy interview with the French sociologist Alain Pessin . In 2017 the first German translation was published under the title Kunstwelten (translated by Thomas Klein) with forewords by Dagmar Danko and Thomas Weber, which point to the topicality of Beckers and the potential for connection to more recent scientific discourses.

The British sociologist Victoria D. Alexander rates Beckers Art Worlds as a very important contribution in the sociology of art . Unlike in the Anglo-Saxon world, the reception of the book has been limited in Germany. Dagmar Danko dedicates a subchapter to him in her book Art Sociology .

Pierre Bourdieu criticizes the art world theory for being the only descriptive and enumerating representation of the collective activities of the actors in the art world. It is disregarded that the interactions and the cooperation of the actors take place in a field that consists of historically grown, objective actor relationships. The struggles to maintain or change the field structure would be based on these. Other authors also criticize that understanding the history of art worlds is neglected and that art world theory in general gives too few answers with regard to the explanation of the mechanisms of the art business .