The hardening (medium high German herten "make hard to make firm, hard / solidify, harden") of ferrous materials ( steel and cast iron ) is a method for increasing their mechanical resistance by targeted modification and conversion of its structure . It can be done by heat treatment with subsequent quenching (sudden cooling). If a metal is plastically deformed, dislocations spread in the workpiece . In order to increase the strength , measures must be taken that hinder the movement of dislocations.

The most important hardening process is transformation hardening. The workpiece is heated to such an extent that the α-iron ( ferrite ) present at room temperature is converted into γ-iron ( austenite ). Much more carbon can be dissolved in austenite than in ferrite (see iron-carbon diagram ). By dissolution of existing cementite (Fe 3 C) in austenite whose carbon goes into solution. If this carbon-rich austenite is now deterred, the kinetic inhibition ( diffusion takes time) prevents it from being converted into ferrite and cementite. Due to the "trapped" carbon atoms, the iron lattice can no longer merge into the body-centered cubic α-iron. Instead, it folds into a tetragonal, distorted cubic body-centered lattice ( martensite ) that is braced by the carbon . The cooling rate plays an important role in this type of hardening. The greater the subcooling (temperature difference), the more martensite is formed. The conversion rate is controlled by different cooling media (water, oil, air or pure gas). The chemical composition of the steel is also important. Because of its high diffusion rate, carbon mainly contributes to the hardenability, while the substitional alloying elements such as chromium determine the hardenability of the material. With small components / high quenching speeds, full hardening can be achieved over the entire cross-section of the workpiece. In order to be hardened, a steel must contain at least 0.2% carbon. In the industrial sector, to avoid edge oxidation and decarburization during the warm-up phase up to above the austenitizing temperature of 723 ° C, work is often carried out in a protective gas atmosphere such as nitrogen, noble gases or in a vacuum . The hardening is a form of surface-hardening , is introduced at the additional in the edge regions of an otherwise low-carbon workpiece prior to quenching carbon ( " carburizing " ), resulting in a hard surface layer, while the core remains tough.

Another possibility for alloying is that the elements involved form a common crystal, but this does not resemble any crystal system of the basic elements. The result is its own crystal system, which, in contrast to that of pure metals, is very complex. Such connections are also very hard and brittle. In addition, these crystals require a fixed atomic number ratio. An alloy with intermediate crystal formation , the alloying elements of which are exclusively metals, is called an intermetallic compound or intermetallic phase . Examples of intermediate crystallization are Al 2 Cu, Mg 2 Si, Cu 4 Sn and Ni 3 Al (see nickel-based superalloys ). The crystallization formula is similar to the formula for chemical compounds, which, in contrast to alloys, have a completely different type of compound . The most common method for introducing foreign atoms is alloying . Foreign atoms can also be introduced into the steel by nitriding . Carbonitriding is a hybrid form of precipitation and transformation hardening.

Advantages of nitriding in particular compared to conversion hardening processes are higher heat resistance (up to 600 ° C, while the martensitic structure already decomposes from around 150 ° C) and the fact that the component is not deformed during the hardening process, so that machining can be completed before hardening. Disadvantages are long glow times and the toxicity of the chemicals required.

The sliding processes are hindered by increasing the dislocation density in the structure. This increases strength and is therefore called work hardening. Work hardening is used particularly with non-ferrous metal alloys (e.g. bronze) and mixed crystal alloys.

Two of the above-mentioned methods consist of heating up to a material- dependent temperature , maintaining the temperature of the workpieces and then very rapid cooling (quenching) taking into account the critical cooling rate .

The quenching medium used is water, to which appropriate additives can be added if necessary, which change the surface tension of the water in order to suppress the occurrence of the Leidenfrost effect (the insulating layer of vapor under the water droplet on a very hot stove). Other quenching media used are oil, salt bath, aqueous polymer solutions (e.g. polyvinylpyrrolidone ), air or gases, e.g. B. nitrogen (N 2 ) or argon (Ar) (the latter when curing in vacuum ). Only steels with more than 0.35% carbon (C) are suitable for such hardening.

Hardening with the laser beam or with the electron beam works entirely without quenching media . In this case, only a small area of ​​a thin surface layer is heated and the very rapid cooling that is required takes place through the dissipation of heat into the workpiece. These processes run at a very high speed. With the blasting process, workpiece areas can be treated specifically locally (within defined limits) without heating the entire workpiece.

Induction hardening is a new process. Especially with workpieces with complex shapes, only certain areas are brought to the required hardening temperature ( partial hardening ) in order to subsequently quench them . If the heat can flow quickly enough into the rest of the still cold workpiece, no quenching is necessary. Preferred quenched and tempered steels achieve hardness values that come close to conventional hardening. In terms of accuracy, controllability and accessibility, induction hardening is only surpassed by laser and electron beam hardening .

Induction hardening is mainly used in tool manufacture. For example, only the cutting edge of pliers is inductively hardened, as it requires a higher hardness than the complete tool. The process can also be used in the manufacture of saws in which only the teeth are hardened.

The heat treatment is based on the phase diagram for steel. It shows graphically which temperatures are required before heating in the so-called austenite area. These lie above a characteristic line in the phase diagram, the temperature values ​​of which are marked as transition points A3 and A1. They are 723 ° C or higher. 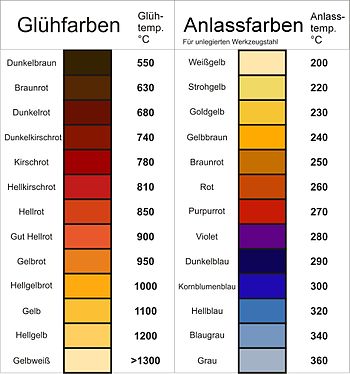 During quenching, martensite forms in the outer areas (which cool down quickly enough) . From a carbon content of 0.6%, residual austenite RA is to be expected, since the martensite finishing temperature M f is below room temperature and so not all of the austenite is converted into martensite. The transformation of this so-called retained austenite is delayed and accompanied by an increase in volume. This leads to considerable tension in the workpiece. Warpage and cracks can result.

In this quenched state, the steel is very hard and brittle and cannot be used for technical purposes. The condition is aptly referred to as "glass hard".

Tempering is carried out depending on the content of alloying elements and carbon in the temperature range from 100 to 350 ° C, in the case of high-alloy steels up to 600 ° C. Some high-alloy steels (e.g. material 1.2379 with 12% chromium content) have a rather complicated tempering behavior, namely when they are tempered for the third time with approx. 500 ° C they are harder than the first time (maximum secondary hardness). In the case of (PM) steels produced using powder metallurgy , however, the working hardness is set via the starting temperature during quenching; tempering takes place at uniform temperatures.

Grain refinement is one way of increasing the strength of metallic materials. It is the creation of a finer, smaller grain in the structure through suitable heat treatment .

In addition to strength, grain refinement also increases the toughness of metallic materials. This reduces u. a. the tendency of the steel to develop hot cracks.

In the metallurgy is an alloy , a mixture with metallic character of two or more chemical elements of which at least one of a metal is. The alloying element can form a solid solution with the basic element (single-phase alloy) or several phases are formed . While the properties of single-phase alloys are essentially determined by the chemical composition, with multiphase alloys these are also significantly influenced by the distribution of the phases ( structure ). Base metal and alloying elements are also called components of an alloy. In order to make better use of metals as a material , certain elements ( alloy elements ) are added to them in the molten state, which should change the material properties (such as hardness , corrosion resistance) of the "base metals" in the desired way. Examples of metal alloys are bronze , brass , amalgam , duralumin .

An application that occurs more often in practice is the through hardening of steel. This is the case when the process of martensitic hardening is to take place over the entire material cross-section. In the case of larger workpiece dimensions, full hardening is only guaranteed if a critical value for the cooling rate is always exceeded inside the workpiece. With martensitic hardening, the hardness and strength values ​​that can be achieved depend on the austenitizing temperature and duration, the steel composition, the cooling rate and the workpiece dimensions. The critical cooling rate can be influenced within wide limits by the choice of alloying elements added to the steel .

Attempts were made to make iron and steel harder as far back as antiquity and the Middle Ages. For this purpose, supposedly magical means were used, such as the use of verbena .