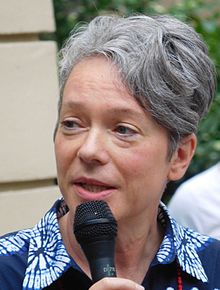 Ina Hartwig (born July 11, 1963 in Hamburg ) is a German author and literary critic . Since July 2016 she has been Head of Culture for the City of Frankfurt am Main .

After the first six years of her life in and near Hamburg, Hartwig spent her school days in Lüneburg . After graduating from high school in 1983 at the Gymnasium Oedeme , she studied Romance and German studies in Avignon and Berlin and was awarded a PhD in 1998 at the University of Essen with a comparative thesis on Proust , Musil , Genet and Jelinek. phil. PhD . After teaching at the Free University of Berlin , she moved to Frankfurt am Main in 1997 and became editor of the Frankfurter Rundschau , responsible for literature since 1999. From 2002 to 2005 she was editor of the Kursbuch magazine together with Tilman Spengler . She was visiting professor for literary criticism in St. Louis , USA (2002), Göttingen (2007/08) and at the German Literature Institute in Leipzig (2014/15). In 2015/16 she was a fellow at the Wissenschaftskolleg zu Berlin.

Between 2010 and 2016 she was a freelance writer, critic and presenter and wrote for the Süddeutsche Zeitung and Die Zeit , among others . She was a regular guest on the 3sat program Kulturzeit . From 2013 to 2016 she was a critic on the team for the literary show Buchzeit on 3sat . She was a jury member for the Leipzig Book Fair Prize (2008–2010) and the German Book Prize (2011). Since 2014 she has been a member of the commission for awarding the Goethe Medal of the Goethe Institute. She is also a member of the PEN Center Germany . She co-wrote the film production “Die Traumten” (2016, director: Ruth Beckermann ) about Ingeborg Bachmann and Paul Celan . Your Bachmann biography Who was Ingeborg Bachmann? appeared in November 2017.

An analytical, comparative approach is striking in her work on literature. But Hartwig also speaks out on socio-political issues such as the newspaper crisis, social inequality or the aesthetic rollback. She is extremely skeptical of the new culture of virtue and prohibition, whether it be educational policy or the standardization of ways of life. On the basis of a basic social democratic conviction, Hartwig insists on the radical freedom of artistic expression.

Hartwig lives and works in Frankfurt am Main. She is married to Ulf Erdmann Ziegler . She has been a member of the SPD since 2012 .

When it became known in May 2016 that Ina Hartwig would succeed the Frankfurt cultural director Felix Semmelroth (CDU) in office, he announced his resignation on July 1, 2016. Hartwig was elected on July 14, 2016 by the Frankfurt city councilors of the CDU and SPD coalition and Greens elected to office. When she took office, she said that Frankfurt needed more space for experiments and alternative art forms, and that she therefore wanted to give more support to the free art scene. This intention was reflected in an increase in funding of four million euros (a total of 36 million euros) in 2017. Ina Hartwig also wants to intensify the cooperation with the Frankfurt twin cities and the critical public debate on current political issues. Their wish to make it easier for all children and young people to gain access to culture was met with the reintroduction of free admission for under 18s to the city's museums. In the course of advancing digitization, Ina Hartwig wants to promote digital change in urban cultural institutions.