Italo Balbo (born June 6, 1896 in Quartesana, Ferrara , † June 28, 1940 in Tobruk ) was an Italian fascist politician and aviation pioneer . As Minister of the Air Force (1929–1933) and Air Marshal , he was a central figure in the establishment of the Italian Air Force, the Regia Aeronautica . From 1934 to 1940 Balbo was Governor General of Italian Libya .

During the First World War he was an officer in the Alpini and received several awards. After the war he studied social sciences in Florence and then became a bank clerk in Ferrara. 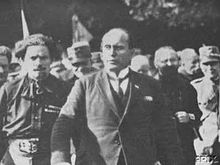 Before Mussolini came to power in October 1922, he joined the fascist party and, as a local group leader, organized the persecution of communists and socialists . He was already one of the party leaders during the march on Rome , in 1924 he became head of the fascist militia and in 1925 State Secretary in the Ministry of Economic Affairs.

Although Balbo had no idea about aviation , Mussolini appointed him Secretary of State for Aviation in 1926. He completed rapid pilot training and was the central figure in building the Italian Air Force. In 1929, when he was only 33, he became Minister of Aviation. He achieved fame thanks to his Atlantic crossings with large aircraft formations. In 1930 Balbo flew with 12  Savoia-Marchetti S.55 from Orbetello to Rio de Janeiro , in 1933 with 24 planes from Rome to New York and Chicago . In Chicago, Seventh Street was renamed Balbo Drive , and President Roosevelt invited him to dinner. Mussolini promoted him to air marshal . In this function he also had to do with the German Reichsmarschall Hermann Göring , with whom he made friends privately.

His success soon brought Italo Balbo a lot of envy and resentment. In 1934 he was transferred to Italian Libya , where he became Governor General . He tried to win settlers for the colony. After the German invasion of Poland , he vehemently opposed Mussolini's alliance with Hitler and advocated Italy's entry into the war on the side of Great Britain .

Balbo died on June 28, 1940 near Tobruk after his plane by friendly fire was shot down by the Italian air defense. To the present day, speculation continues that his shooting down - unlike officially announced - could not have been an accident.

On November 23, 1933, Balbo was awarded the Icelandic Order of the Falcon (Grand Cross).