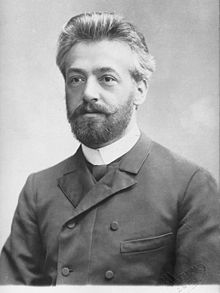 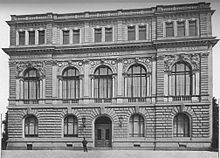 The Hoch Conservatory in Frankfurt am Main 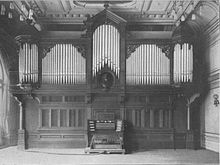 The organ in the Hoch Conservatory

Iwan Knorr came to Russia with his parents when he was four years old. Knorr's father, Armand Knorr, was a photographer by profession and moved from Riga to Leipzig around 1867 when Iwan was 15 years old and already a high school student. Ivan received his first piano lessons from his mother.

At the Leipzig Conservatory he was a student of Ignaz Moscheles , Ernst Friedrich Richter and Carl Reinecke , to which his Opus 1 - the trio variations from 1873 - are dedicated. His other teachers were Salomon Jadassohn , Oscar Paul , Theodor Coccius and Robert Papperitz . His fellow students included those who had also become known in the music world: Hermann Kretzschmar , Paul Klengel , Edmund Röthlisberger and Karl Muck , who was then considered the best piano player at the Leipzig Conservatory.

In 1874 Knorr was employed as a music teacher at the Imperial Ladies Institute in Kharkov . In 1878, in addition to this activity, he was appointed head of theoretical classes at the Kharkov Department of the Imperial Russian Music Society. He came from Kharkov to his relatives in Germany every summer for two months. In 1877 he sent orchestral variations on a Ukrainian folk song to Johannes Brahms in Vienna “with a request for a sincere judgment”. Brahms answer… “In any case, it is gratifying on all sides that one can expect the very best from one's creator” was of course the strongest driving force for Knorr's further compositions. He now continued to work diligently, including a piano quintet, which he also sent with the aforementioned variations and fugue on a Russian folk song to Brahms, who responded immediately and did not hold back with benevolent advice. (The quintet was later reworked into a quartet in Frankfurt, probably on the basis of a letter from Brahms, and published in this version as opus 3.) At the end of December 1882, Brahms arranged for the Variations to be performed under Friedrich Hegar in Zurich and personally attended all rehearsals. Knorr now had only one wish to come to Germany. Brahms supported him by recommending the young artist to his friends: Franz Stockhausen in Strasbourg, Franz Wüllner in Dresden and Bernhard Scholz , who was then about to move from Breslau to Frankfurt.

In 1883 Knorr became a piano teacher at the Hoch Conservatory in Frankfurt am Main with Bernhard Scholz. This marked the beginning of the second period of his life, in which he was able to develop to mature perfection as a creative artist and pedagogue - no longer in a stranger and solitude - but in lively intercourse and exchange with artists such as Bernhard Scholz , Clara Schumann , Lazzaro Uzielli , Ernst Engesser , Fritz Bassermann and many others. The number of pupils of the Conservatory in the past academic year 1884/85 was: 127 women and 62 men = 189 together. The seminar connected with the Conservatory was attended by: 6 boys and 16 girls. From 1888 he took over the subject of free composition in addition to theory and music history. In 1895 he was appointed royal professor. When Scholz resigned from his post as director in 1908, Knorr was his successor.

Knorr founded under the protectorate S. Kgl. Highness of the Landgrave of Hesse founded the patronage association in 1908 to support destitute students.

In a letter from September 1907 to a well-known musician, Knorr denies his unjust attacks against the backwardness of the German conservatory directors as follows:

“In so many things that I taught my students, I have expressly said to my students: they are rules that you have to follow as long as you are a minor, they are crutches that support the lame man, but which he quickly throws away when he is healed. Work your way through to independent thinking and feeling, and if it has come to that, then don't care about all the rules and your teacher!
[…]
I trained students, I would like to say, in all price ranges, from the ossified Philistine to people like Hans Pfitzner and the brilliant revolutionary Cyrill Scott. I have tried to respect the individual and have been careful not to impose my taste, my direction on him, and only endeavored to provide him with the most perfect technique possible, the sword that he should wield in a quarrel. No teacher gives courage and strength to win, only a god! "

The opus numbers do not correspond to the chronology of origin.