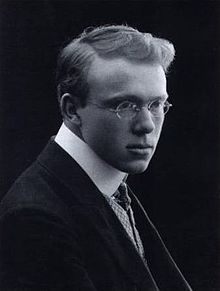 Walter Braunfels was born in Frankfurt as the youngest son of a family interested in art. His father was the lawyer and literary scholar Ludwig Braunfels , who had converted from Judaism to the Protestant faith. His mother Helene Spohr was a great niece of the composer Louis Spohr and was friends with Clara Schumann and Franz Liszt .

Walter Braunfels received his first musical lessons from his mother at an early age. At the age of 12 he continued his education at the Hoch Conservatory in Frankfurt. He later began studying law and economics at the University of Munich . Around 1902 he went to Vienna to be trained as a pianist with Theodor Leschetizky . Back in Munich, he studied composition with Ludwig Thuille . In 1909 he married Bertel von Hildebrand, the youngest daughter of the sculptor Adolf von Hildebrand and former fiancé of Wilhelm Furtwängler . Of the couple's four children, Wolfgang Braunfels in particular made a name for himself as an art historian and Michael Braunfels as a musician. The architect Stephan Braunfels is a grandson of Walter Braunfels.

During the First World War , Braunfels was drafted into military service in 1915 and wounded while serving at the front in 1917. After returning home from the war, the Protestant converted to Catholicism. The religious creed was probably the main reason for withdrawing his clearly anti-Catholic opera Ulenspiegel . The conversion was later reflected in numerous of his compositions, such as the Te Deum (op. 32) and the Great Mass (op. 37). Several years followed in which he performed successfully as a pianist. In 1925 he was appointed director of the newly founded University of Music in Cologne together with Hermann Abendroth . On May 2, 1933, right at the beginning of the National Socialist dictatorship , he was removed from office as a so-called “ half-Jew ” by ministerial instruction. His works were no longer allowed to be performed. In 1934 he was expelled from the Berlin Academy of Arts and in 1938 from the Reich Chamber of Music . However, Braunfels stayed in Germany, emigrated internally and devoted himself to composition.

From 1937 he lived in Süßenmühle on Lake Constance near Überlingen . The Walter-Braunfels-Weg in Überlingen was named after him in 1983.

After the Second World War , he was entrusted by the then mayor of Cologne, Konrad Adenauer, with the task of re-establishing the music college. In 1947 he was once again appointed director of the university. Old "clusters" of musicians from the time of National Socialism who had remained in office made his work more difficult. In 1950 he retired, back to Lake Constance. His students include the composers Carlos Veerhoff and Hermann Schroeder .

Grave of Walter and Michael Braunfels in Cologne's southern cemetery

Braunfels' compositional work is extensive and very diverse. It includes numerous operas , orchestral works , choirs , songs , chamber music and works for piano. His major breakthrough as a composer came in the 1920s with his opera The Birds . At that time he was one of the most outstanding and most performed German opera composers , along with Franz Schreker and Richard Strauss . Famous conductors of his time performed his compositions, such as Bruno Walter , Wilhelm Furtwängler and Otto Klemperer . Braunfels saw himself as a late romantic traditional composer in the succession of Hector Berlioz , Richard Wagner , Anton Bruckner and Hans Pfitzner . Its tonal language is characterized above all by heavily chromatised harmonies that are pushed to the limits of tonality . A very wide range of expressions ranges from ascetic frugality to ironic and grotesque twists like Kurt Weill's , echoes of neoclassicism to ecstatic outbursts. After the Second World War, his style was felt by the representatives of the musical avant-garde to be out of date. So the composer fell into oblivion after his death. It was not until the 1990s that his works were rediscovered to a greater extent for musical life. The opera Ulenspiegel , from which he had distanced himself, was only brought back to the stage in 2011 in Gera after the world premiere (in the design by Stephan Braunfels), in 2014 there was a highly acclaimed performance by the ensemble of at the Bruckner Festival in Linz association EntArteOpera dedicated to the revival of works that were branded "degenerate" by the Nazis as.