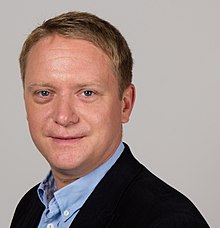 Jan Korte (born April 5, 1977 in Osnabrück ) is a German politician and political scientist. Korte is a member of the Bundestag for Die Linke .

After graduating from high school Oesede in Georgsmarienhütte in 1997 , Korte initially did his community service and began studying political science , sociology and history at the University of Hanover in 1999 , which he completed in 2005 as a Magister Artium (MA). Jan Korte is married and has two children.

Jan Korte belongs to the reform-oriented forum for democratic socialism . He is the group's data protection officer . Korte is a domestic politician. His focus is on data protection, security policy and civil rights . Korte was one of the sharpest critics of Wolfgang Schäuble's domestic policy in the grand coalition. Furthermore, he is involved in the field of history and politics for the rehabilitation of the time of the Cold War left pursued (see KPD ban ) and for the rehabilitation of all NS - Justice victims .

At a Jusos congress at which Korte was invited as a guest, he said that the Soviet occupation of Afghanistan had achieved standards that the occupation of NATO had not yet achieved, for example enabling general schooling.

Korte is the official supporter of the surveillance-critical data protection demonstration Freedom Instead of Fear .

In the general election in 2017 he was re-elected and since October 2017 the first parliamentary secretary of the Left Party. In the 19th German Bundestag, Korte is chairman of the committee for election examinations, immunity and rules of procedure. In addition, he is a full member of the Mediation Committee and the Council of Elders and a deputy member of the Election Review Committee.