Johannes Winkler (born May 29, 1897 in Bad Carlsruhe , † December 27, 1947 in Braunschweig ) was a German Evangelical Lutheran theologian and rocket pioneer . He launched the first European liquid rocket on February 21, 1931 near Dessau .

Johannes Winkler was born as the sixth of eight children in Bad Carlsruhe, Oppeln district. He attended elementary school from 1904 to 1909 and from 1910 to 1912 the secondary school in Opole ( Silesia ).

From 1912 to 1915 he prepared for his Abitur at the Royal Johanneum High School in Liegnitz . Shortly before leaving school, he volunteered for the army and was seriously wounded in an assault in 1916.

From 1918/19 Johannes Winkler took a high school graduate course at the Technical University of Danzig in order to get his higher education entrance qualification. He then studied mechanical engineering there for two semesters. He earned his living at the Danzig Schichau shipyard . At the urging of his parents, however, he began studying theology at the universities in Breslau and Leipzig . He joined both the Breslauer and the Leipziger Wingolf . However, his interest was still in the natural sciences and technology, so that he took mathematics , physics , astronomy and other scientific subjects as minor subjects.

After completing his studies, he became a theology candidate in Witten (Ruhr) in 1923 and worked in 1924 as Rendant (administration of finances) in the Oberkirchenkollegium (OKC) of the Evangelical Lutheran Church of Prussia in Breslau.

In 1926 he married Elisabeth Froböß, a daughter of church councilor Georg Froböß . The marriage resulted in two daughters.

Founding of the Association for Space Travel

Science and technology remained his great passions. In particular, researching ways to penetrate space with the help of rockets kept him busy.

In other space enthusiasts (u. A. Francis of Hoefft , Hermann Oberth , Max Valier , Walter Hohmann , Rudolf Nebel ) he founded in Breslau on July 5, 1927 Spaceflight Club (AFR). This association had set itself the goal of making a rocket launch into space possible by collecting funds and systematically researching the technical fundamentals . In order to spread the idea of ​​space travel, the association published a scientific journal on the subject of rocket technology and space travel ( Die Rakete ). Johannes Winkler became the first chairman.

In 1928 he began at the Technical University of Breslau with systematic measurements of thrust courses on solid fuel rockets. Winkler quickly realized that only engines with liquid fuels were suitable for space travel. Only with their significantly higher performance (thrust and burning time) could a flight into space be considered. He carried out the first investigations on a drive apparatus for liquid fuels and coined the term “ jet engine ” for this .

Development and testing of the first rocket 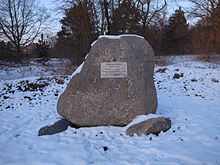 Hugo Junkers became aware of him through Winkler's publications . Junkers, who at that time was successfully constructing aircraft in Dessau , needed suitable start-up missiles for his seaplanes. He managed to bring Johannes Winkler to his research institute in Dessau. From September 1929 onwards, Winkler worked as a test engineer at Junkers and tried out various engine designs and fuels.

In parallel to this work, Johannes Winkler began developing a vertical launch rocket in the summer of 1930 . With her he wanted to prove that a rocket flight with liquid fuels was possible. He financed the expenses for this work to a large extent out of his own pocket. Additional funds were made available by Hugo A. Hückel (1899–1947), a space enthusiast from Neutitschein . After many careful attempts with the engine, the first attempt at take-off was made on February 21, 1931 on the parade ground near Dessau-Großkühnau . But there were problems with the fuel supply and the rocket (HW1 = Hückel-Winkler-1) rose only about 3 m in height. With the help of the mechanic Richard Baumann, the rocket was revised again, so that a second attempt at launch could be made on March 14, 1931. This time everything went well and HW1 rose about 60 m high and landed about 200 m from the starting point. Winkler called this moment the hour of birth of the liquid rocket. At that time, Winkler did not yet know that this rocket was not a world premiere, but “only” the first liquid rocket in Europe. As early as March 16, 1926, the American Robert Goddard (1882–1945) launched a liquid rocket on a farm in Auburn (Massachusetts) .

Development and testing of the second (large) rocket

In April and May 1931 there were further successful launches of a modified design of the rocket (HW1a), so that Winkler could start with the design and construction of a much more powerful liquid rocket (HW2) from May 1931. Since this rocket was supposed to cover a significantly greater height and flight distance, the parade ground near Dessau-Großkühnau became too small. In autumn 1931, at Hückel's urging, Winkler moved his experiments to the Berlin rocket airfield in Berlin-Tegel . A group of space enthusiasts around Rudolf Nebel was also working there on the development of a rocket. At the beginning of 1932 Winkler began with test bench tests on the rocket airfield and by the end of May 1932 had finished developing his HW2.

A lengthy search for a suitable launch site for HW2 began. A planned start on Greifswalder Oie (small island north of Usedom) was prohibited by the authorities. It was not until autumn 1932 that Winkler received permission to launch his rocket on the Fresh Spit in East Prussia (near Pillau ). But a first attempt on September 29, 1932 failed because of a leaky measuring line. On October 6, 1932, a second attempt to take off was made, but the rocket was destroyed by a violent explosion before it took off.

After this failure, Winkler returned to Dessau at the end of 1932. In order to continue his work on rocket technology, he tried to found a research institute for jet engines. But due to a lack of support from the local authorities and its precarious economic situation, this attempt was unsuccessful.

After Hitler came to power , Winkler was able to resume his previous work at the Junkers factories on August 11, 1933. Until 1939 he worked there on the development and test bench testing of various fluid power units. From July 1933 to August 1939 he was a supporting member of the SS ; In 1937 he joined the NSDAP .

In July 1939 he began working at the Aviation Research Institute Hermann Göring (LFA) in Braunschweig. From there, Winkler went to Göttingen in 1941 to the Aerodynamische Versuchsanstalt (AVA), where he worked until the end of the Second World War .

In the denazification process , it was classified in category 4. From 1945 to 1947 Winkler wrote reports on his rocket research for the Royal Air Force . In lectures he recommended the use of atomic energy to propel rockets and stated that the “cultural task of space travel” had been strongly promoted by the Second World War . This seemed to him to be the deeper meaning of war. Johannes Winkler died in Braunschweig- Querum after a stroke.