Tschagguns is a municipality in Austria in Vorarlberg, characterized by tourism, with 2195 inhabitants (as of January 1, 2020). It is located in the Montafon , a valley in the Bludenz district .

Tschagguns is located in the westernmost state of Austria, Vorarlberg, in the Bludenz district. The settlement area of ​​the municipality extends over an altitude of 650 to 1,200 meters.

34.2% of the area is forested, 33.4% of the area of ​​the Alps. There are no other cadastral communities in Tschagguns.

Above the center of Tschaggun lies the village of Latschau with the reservoir of the Lünerseewerk and a station of the Golmerbahn . The stations are in ascending order:

The Tschagguns “local mountain” is the Mittagspitze ( 2168  m above sea level ).

Tschagguns was first mentioned in a document in 1431 as the "Liebfrauenpfarre im Montafon".

The Habsburgs ruled the places in Vorarlberg alternately from Tyrol and Upper Austria (Freiburg im Breisgau). From 1805 to 1814 the place belonged to Bavaria, then again to Austria. Tschagguns has belonged to the Austrian state of Vorarlberg since it was founded in 1861.

Tschagguns has been connected to the Montafonerbahn line that was in operation at the time since 1905 . The place was part of the French occupation zone in Austria from 1945 to 1955. The old church of Latschau above Tschagguns burned down in 1973.

In the last few decades the birth balance has always been positive and the migration balance negative. In the decade from 2001 to 2011, emigration increased so rapidly that the population decreased slightly.

The community council consists of 21 members.

In the municipal council and mayoral elections in Vorarlberg in 2015 , the open list of the Tschagguns People's Party, which was the only candidate, received all 21 seats.

The coat of arms was awarded to the Tschagguns community on December 13, 1965 by the Vorarlberg state government .

The coat of arms represents a split shield: A silver church with a black roof and spire is depicted in blue on the front. The coat of arms is divided into silver and red at the back, a pair of crossed black keys and a golden paddle wheel below. 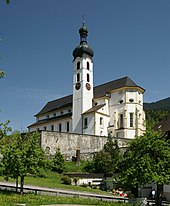 In 2003 there were 33 commercial businesses in the village with 264 employees and 20 apprentices. There were 1030 employees subject to wage tax. Tourism and tourism are important. In the 2001/2002 tourism year there were a total of 297,819 overnight stays. In Schruns-Tschagguns and the surrounding area there are ski areas from 700 to 2400 meters, 62 lifts and cable cars in the villages and in the vicinity with 200 km of groomed slopes. There are also 90 full-time and part-time farmers with a total of 540 livestock units and a cultivated agricultural area of ​​around 500 ha.

Above the center of Tschaggun lies the village of Latschau with the reservoirs of the Lünerseewerk . The Wuppertal Carl-Duisberg-Gymnasium has had a school camp there since 1927 ("Sulzfluh"). 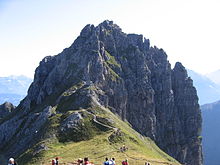 Tschagguns is connected to the railway network with a train station on the Bludenz – Schruns railway line.

Another important transport structure or sight is the Maurentobel tunnel at the end of Tschagguns.

In January 1946 the "three-tower giant slalom" and the alpine combination of the Vorarlberg state championship take place in Tschagguns. On December 29, 1946 the opening competition takes place on the newly built Ing. Ohneberg-Schanze .

The chairlift on Grabs was put into operation on February 15, 1947. It was the first chairlift in Vorarlberg and the longest chairlift in Austria at the time. The Grabserbahn was built by Robert Plankl , the tenant of the sports hotel "Adler" (where the municipal office is today). He originally wanted to build a lift to the Golm. But since the Illwerke were already planning transport systems for the construction of the Lünerseewerk , he decided on Grabs. The Hochegga ski lift had also been in operation there since the winter of 1951/52 .

From February 18 to 23, 1947, the Austrian championships took place in Tschagguns, where both the Alpine and the Nordic competitions were held.

With the gold key races from 1963 to 1983, international women's ski world cup races were held alternately on Grabs , Kapellalpe and Golm .

The Grabs chair lift was dismantled at the beginning of 2008, the Hochegga drag lift is still there.

There are two volunteer fire brigades in the Tschagguns community , in Tschagguns and Latschau. They provide fire protection and general help. The Tschagguns volunteer fire brigade has around 50 firefighters and is housed in the renovated fire station on Zelfenstrasse. The vehicle fleet consists of a tank tender , a pump vehicle and a crew transport vehicle . The function of the commander has been fulfilled by Herbert Marent since 2000. The fire brigade, founded in 1883, has already deployed over 150 missions and assistance and has maintained a fire brigade partnership with the Bad Friedrichshall volunteer fire brigade in the Heilbronn district in Baden-Württemberg for over 50 years .

The Latschau volunteer fire brigade is stationed with slightly fewer firefighters in the fire station above the Lünerseewerk and is headed by commander Dietmar Bitschnau. The fleet also consists of the three vehicles mentioned above.

Cities and communities in the Bludenz district