Jura [ ˈdʒʊərə ], ( Scottish Gaelic Diùra , English Isle of Jura ), is an island in the Inner Hebrides in Scotland . Jura is northeast of the larger island of Islay and is part of the Argyll and Bute Council Area . Their main town is Craighouse .

The name comes from Old Norse and means "deer island". There are over 5,500 red deer on the island  .

With an area of ​​around 367 km², Jura is slightly more than half the size of Islay, but with only around 196 inhabitants (as of 2011) it is considerably less populated. The island is geographically divided into two halves by the deep bay of Loch Tarbert.

The Paps of Jura are a mountain formation consisting of three quartzite peaks. They are located in the southern half of the island and determine the silhouette of the Jura through their conical shape. The highest mountain is the 785 meter high Beinn Oir (German "Goldberg"). The Beinn Shiantaidh (Holy Mountain) is 755 meters high and lies east of the Beinn Oir , while the 734 meters high Beinn a 'Chaolais ("Mountain on the Sound") is southwest. Cora Bheinn ("Steep Mountain") with a height of 569 meters is located northeast of Beinn Shiantaidh , but like other small knolls is not part of the group of three. On a clear day, the "Paps" can be seen more than 100 kilometers away.

North of the island, in the Strait of Corryvreckan to Scarba Island , is the Corryvreckan Whirlpool, one of the largest natural whirlpools on earth. It is considered difficult to navigate and was the undoing of many people and animals.

Jura can only be reached via Islay with a small ferry that heads for the Feolin pier on Islay Sound on the west coast. The main town on the island is Craighouse. There you will find the Isle of Jura whiskey distillery and the only hotel on the island. 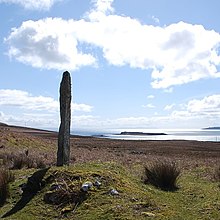 The oldest traces of settlement on the island and in all of Scotland date back to the Mesolithic , the phase after the last Ice Age and before agriculture began. The traces of human activity at Glenbattrick could be dated to around 8030 BC. To be dated. 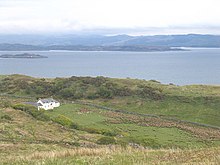 Orwell's Barnhill House in the Jura