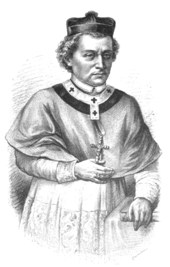 Juraj II. Drašković von Trakošćan , Hungarian György Draskovics (born February 5, 1515 at Bilina Castle in Croatia , Bukovica region (west of the city of Knin ); † January 21, 1587 in Vienna ) was a Croatian nobleman, archbishop and cardinal . From 1567 to 1576 he was Ban (viceroy) of Croatia .

Juraj Drašković came from the Croatian noble family Drašković . His father was Bartol Drašković (* approx. 1500; † 1538), a small nobleman from the south of Croatia. His mother Ana b. Utješinović, born in Kamičak , was a sister of the cardinal and statesman Juraj Utješinović , better known as Georg Martinuzzi .

He studied in Krakow , Vienna , Bologna and Rome , was ordained a priest in 1539 and became canon of Großwardein , abbot of Lelesz , infuled provost of the collegiate church of St. Martin in Pressburg , king and emperor Ferdinand I councilor and confessor, and in 1557 bishop of Fünfkirchen .

In 1561 he translated the book of Vincent von Lérins "Against the Heretics" ( Commonitorium fidei ). He took part in the Council of Trent for Croatia and Hungary , where he appeared in the interests of the emperor. Ferdinand appointed him bishop of Agram (Zagreb) in 1565 , and his successor Maximilian II to the real secret council , and in 1567 to the ban of Croatia , Dalmatia and Slavonia . In 1573 he became Archbishop of Kalocsa .

Juraj Drašković organized the defense against the Turks , where he was relatively successful. For this, Emperor Rudolf II granted him the dignity of Hungarian court chancellor in 1578 and, in addition to his other benefices , gave him the diocese of Raab in 1578 . In 1584 the Emperor left the Trakošćan Castle to him , which remained in the family's possession until 1945. Elevated by Pope Sixtus V to cardinal priest on December 18, 1585 and governor of Hungary by Emperor Rudolf , he died on January 21, 1587.