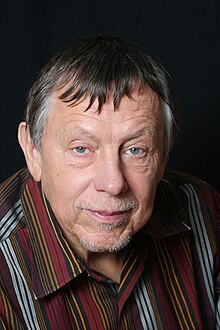 Schmidt grew up in a middle-class academic family on the Lower Rhine, he survived the bombing war by evacuating (sent to Kinderland ) to Silesia, attended the humanistic grammar school in Munich-Gladbach and graduated from the Jesuit college in Bad Godesberg . He studied at the universities of Bonn, Hamburg, Heidelberg and Göttingen. In 1992 Schmidt and Ghita Gothóni, a Finnish singer and novelist, married.

In 1961/62 Schmidt received a scholarship from the World Council of Churches in the USA. There studies, internships and anti-racism training under Martin Luther King he processed in the book Religion - Enslavement and Liberation . From 1965 he was a vocational school priest in Cologne .

Schmidt was involved in the extra-parliamentary opposition , including as chairman of the “ Republican Club ” in Cologne. In the 1970s, the student pastor showed solidarity with parts of the student movement and supported the befriended pro-Sandinista ASTA international advisor Enrique Schmidt-Cuadra .

Schmidt also worked with theologian Dorothee Sölle on the series of events Political Night Prayer , which took place regularly from 1968 to 1972 in the Antoniterkirche in Cologne , and with her published two books on the subject of Christianity and socialism. In the 1970s there were attempts to get the church leadership of the Evangelical Church in the Rhineland to dismiss the "radical left pastor" from church service; these failed.

He resigned from the Alliance 90 / The Greens party . a. because of the deployment of the Air Force in Kosovo after several years of membership. He took and takes part in actions of the Kölner Rom e. V. and take part in local peace activities.

Human rights activist in the Philippines

In 1987/88 Schmidt worked as a theological lecturer and human rights worker in the Philippines . On behalf of the Protestant Church Council there, he took part in “ Fact Finding Missions ” to uncover bloody attacks by the military and paramilitaries. The military kidnapped him and made him involved in guerrilla activities. In addition to the German embassy, the Rhenish church leadership, Foreign Minister Hans-Dietrich Genscher and numerous political and cultural celebrities, including Schmidt's friend Günter Wallraff, intervened for weeks . Schmidt was only released after negotiations before the Philippine Supreme Court. In 1989 he resumed his service in the vocational (technical) school.

From 1970 to 1992 Schmidt was co-editor and editor of the magazine Junge Kirche . After his retirement in 1994, Schmidt intensified his journalistic work, which included book productions, lectures, radio and magazine contributions. He wrote double biographies about Rhenish democrats around the revolution of 1848/49, about Johanna Kinkel and Gottfried Kinkel , about Mathilde Franziska Anneke and Fritz Anneke , about the democratic doctor Andreas Gottschalk and Franz Raveaux . He presented exhibitions on all biographies in Cologne and other cities. His monograph Faith, Power and the Struggle for Freedom on 500 Years of Protestants in the Rhineland became a standard work .

In addition to his work on the history and shapes of Rhenish Protestantism, he portrayed the Catholic doctor Franz Vonessen , who had refused to participate in forced sterilization during the “Third Reich” , and the also Catholic orphanage director Friedrich Tillmann , who was the office manager of the Nazi “ euthanasia ”. co-responsible. Schmidt was also the city guide of the Antonitercitytours in Cologne, mostly on the topics of his publications, such as Franz Vonessen.