The Bayreuth Clinic is the largest hospital in the city of Bayreuth and the academic teaching hospital of the University of Erlangen-Nuremberg .

Presumably as early as 1449/50, the first "Siechhaus" (hospital) was created in Erlanger Strasse 59. The building was rebuilt in 1580 and received an upper floor in 1784. Between 1810 and 1828, 2034 patients were treated there, with a capacity of around 30 beds. In 1848 the city rented the Vetterlein'sche property in Wolfsgasse, bought it on September 23, 1850 and set up it as a new hospital. Mayor Dilchert mentioned in 1863 a. a. “Nice, friendly, sunny, healthy rooms, cold shower and steam bath facilities, fresh drinking water, a beautiful garden and a complete set of instruments”. The number of patients per year rose from around 400 to 657 between 1884 and 1900. The expenses for one sick person per day in 1884 included 2.46 marks for medication and 1.98 marks for beer or wine.

At the beginning of the 20th century, the municipal hospital was built in the Kreuz district on 11 days of work and put into operation in 1905. In the following years it was expanded to include two wings and a chapel and, in 1922, a sister house. There was also an isolation house for infectious diseases, a morgue and a house for the senior doctors. At the time of its founding, the municipal hospital met the most modern standards. In the first year 1085, in 1915 1601 patients were treated, the number of beds grew rapidly from 100 to over 200.

Bayreuth Clinic, view from the east 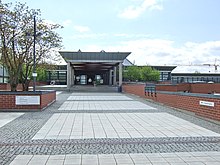 Main entrance to the clinic

In 1963, the city council began to consider building a new “clinic” instead of further expanding the city hospital. In 1973, the Bayreuth Hospital Purpose Association was founded to implement the project , and the foundation stone was laid on August 6, 1981 on the Red Hill . The topping-out ceremony followed on October 21, 1983 and the inauguration on June 27, 1986. Despite all the difficulties, the building, which cost 278 million DM , of which the city and district had to bear only 30 million, remained on schedule and on budget.

On June 4, 1986, three weeks before the official inauguration, the first construction phase of the clinic was put into operation. The children's clinic and the associated vocational schools followed in 1987/1988, cardiac surgery in 1996 and the department for dermatology and allergology as well as the geriatric day clinic the following year. The palliative care ward was opened in 2003, and in 2004 the clinic was merged with the local Hohe Warte hospital . In 2011 the new emergency room with preclinical operation went into operation, in 2013 the new intensive care center.

Together with the Medical Faculty of the Friedrich-Alexander University Erlangen / Nuremberg and the University of Bayreuth, the Medical Campus Upper Franconia is being built at the Bayreuth Clinic. Medical training in the clinical phase at the Bayreuth Clinic is to begin in 2021. A new teaching and research building is to be built for this purpose.

The clinic facility is being rebuilt in several construction phases. The first construction phase envisages a new central operations building with eleven rooms, a central laboratory and a sterile goods supply. From 2023, the new rooms with daylight windows are to replace the current nine operating theaters located underground.

The hospital fulfills regional priority tasks in diagnosis and therapy and has a highly differentiated range of services and medical-technical facilities. With around 3000 employees and over 300 training positions, the Bayreuth Clinic is one of the largest employers and training companies in the region.

There is a cooperation agreement with Klinikum Fichtelgebirge gGmbH. The Bayreuth Clinic is responsible for the operation of a cardiac catheter measuring station in the Marktredwitz Clinic .

A cooperation agreement in the field of radiation therapy was concluded with the Kulmbach Clinic . The subsidiary MedZentrum Klinikum Bayreuth GmbH also operates a linear accelerator for inpatient and outpatient care for patients at the Kulmbach Clinic.

The hospital currently has 25 clinics and institutes spread over the two locations.

The Bayreuth Clinic was founded on December 18, 2003 and emerged from the Bayreuth Municipal Hospitals. The sole shareholder is the Bayreuth Hospital Purpose Association , whose members in turn are the City of Bayreuth and the Bayreuth District . The society has been the sponsor of the two hospitals, the Bayreuth Clinic (Preuschwitzer Strasse 101) and the Hohe Warte Clinic (Hohe Warte 8). Since January 2010, the two have been forming a maximum care hospital in Upper Franconia .