The crystal and ligand field theory are two different but mutually complementary theories of complex compounds. The crystal field theory, often abbreviated as KFT, provides a qualitative understanding and the ligand field theory allows quantitative predictions of the properties of transition metal salts or complexes . Both theories explain the structure, color and magnetism of these substances.

The crystal field and the ligand field theory have the quantum mechanical treatment of the complex center and the electrostatic description of the ligands in common.

Further theories are required to fully understand the complex compounds. The most important are valence bond theory (VB theory) and molecular orbital theory (MO theory). The VB theory provides an explanation for the complex geometry that is assumed by the crystal field and the ligand field theory. The MO theory enables a complete understanding of the covalent bond component in complexes.

Structure of the complex compounds

The interaction of the electrostatic ligand potential and the quantum mechanical structure of the valence electrons of the central atom is fundamental for both crystal field and ligand field theory.

The approach of both theories is different:

The crystal field theory , often abbreviated as KFT or CF theory, corresponding to the English term Crystal Field Theory , was developed from 1932 by John H. van Vleck - based on a work by Hans Bethe from 1929 - to determine the physical properties of transition metal salts that show unexpected magnetic and optical behavior.

It is a purely electrostatic model in which the anions or ligands are viewed as negative point charges whose electric field , the crystal field , influences the electrons of the outer d orbitals of the cations . A crystal is not considered as a whole, but a cation is picked out and only the influence of the closest neighbors in the crystal lattice is examined.

Principle of the crystal field

The starting point is a classic description of the ligand system, whereby the ligands are viewed as negative point charges, whose electrostatic field, the crystal field, influences the electrons of the outer d orbitals of the complex center. The term "crystal field" expresses that in the case of the effect of the ligands on the complex center, according to the classical understanding of a crystal, only the influence of the closest neighbors is examined.

The ligand field theory comes from Hermann Hartmann and Friedrich Ernst Ilse and was published in 1951. It allows a very precise interpretation of the spectroscopic complex properties.

Principle of the ligand field

In the free complex center the d orbitals are degenerate, i.e. that is, they have the same energy. If you bring an atom into a spherically symmetrical ligand field, the degeneracy is retained, but the energy content increases due to the repulsive interaction between d electrons and ligands. In real complexes the ligand system is not spherically symmetrical, but has a special geometry that depends on the size relationships between the central atom and the ligands. As a result, the ligands destabilize some d orbitals more than the others and, from an energetic point of view, the states are split.

The ligand field theory makes it possible to calculate the magnitude of the splitting very precisely and quantitatively. The size of the splitting depends on the “strength” of the central atom and the “strength” of the ligands. The field strength parameters of the complex components are determined empirically and recorded relative to one another in spectrochemical series . 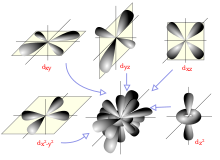 Representation of the squares of the D orbitals. If one approaches ligands on the coordinate axes, the energy increases in the orbital.

A transition metal central atom can potentially accommodate 3 × 2 = 6 electrons in the three favorable orbitals, but energy must be expended so that two electrons can be in one orbital. Whether the favorable orbitals are fully occupied depends on whether more energy is gained or lost, i.e. on how big the energy difference between the orbitals is.

In weak ligands , for example, one finds high-spin -configured central atoms in which the lower-energy orbitals are not fully occupied, and low-spin -configured complex centers with fully occupied orbitals in comparatively strong ligands. The two electron arrangements "high spin" and "low spin" exist in the octahedral crystal field only at d 4 , d 5 , d 6 , d 7 .

Are energy levels degenerate in an octahedral complex, i.e. This means that it cannot be determined in which orbital an electron is located, a geometric distortion occurs until this degeneracy has been eliminated. This is known as the Jahn-Teller effect .

One example is the d 1 valence electron configuration: In an octahedral field, this electron must be assigned to one of the three t 2g orbitals. Since it cannot be determined in which it is actually located, there is a distortion, which on the one hand leads to the fact that it can now be said exactly in which orbital the electron is located and on the other hand, the energy for this electron is minimized.

In this example (d 1 ), the Jahn-Teller distortion causes a compression in the z-direction. This results in a further splitting of the t 2g and e g orbitals: The orbitals with a z component ( d xz , d yz , ) are destabilized by the approach of those ligands that are on the z axis, whereas those without z-component , d xy ) are further stabilized. In this new energetic orbital sequence, one electron can be ascribed to the d xy orbital, which now represents the most stable (energetically lowest) orbital. Since the amount of stabilization and destabilization is the same, this d xy -orbital is now lower than before in the "composite" of the degenerate t 2g- theorem, which means for the electron that there is a larger one in the distorted (here: compressed) octahedron Undergoes stabilization.

Jahn-Teller stable complexes, i.e. those that are not subject to the Jahn-Teller distortion: d 3 , high-spin d 5 , low-spin d 6 , d 8 and d 10 . In these the electronic states are not degenerate.

Four point charges can be arranged in the form of a tetrahedron around the central transition metal. Through this geometry the orbitals , and are energetically raised and as well as energetically lowered. This gives a 3–2 split (t 2 and e).

With d 3 , d 4 , d 5 , d 6 , both configurations "low spin" and "high spin" would be expected - due to the low field splitting, however, only "high spin" complexes exist (an exception is, for example, tetrakis (1-norbornyl ) cobalt (IV) , whose norbornyl ligands cause sufficient splitting).

The ligand field splitting in the tetrahedral crystal field corresponds to 4/9 of the octahedral splitting. 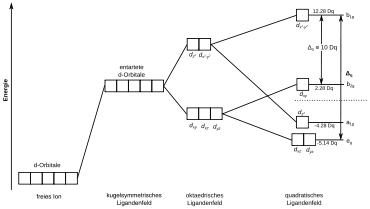 Energy level diagram of the d orbitals of a complex center in the square-planar ligand field, starting from the octahedral. Energy values ​​in Dq are for 3d transition metals. The dz 2 orbital is usually higher in energy than the two degenerate orbitals.

Another possibility for 4 point charges is the square . The resulting split is more complicated: d x 2 - y 2 is severely disadvantaged, slightly disadvantaged is d xy , below are d yz and d xz on one level , the lowest is d z 2 (1-1-2-1 split) . (Depending on the metal, however, the order of the two lowest levels can be reversed and the d z 2 lies above the d yz and d xz , e.g. for Ni 2+ )

This geometry is often found in d 8 configurations (or 16 electron complexes) with large ligand field splitting. The d x 2 - y 2 orbital, which is energetically very high due to electrostatic repulsion to all ligands, remains unoccupied.

This splitting is typical for palladium, platinum and gold cations, since they usually lead to the typical large splitting of ligand fields. All complexes formed by these ions are diamagnetic low-spin complexes.

The crystal and ligand field theories have also been successfully applied to interpret the effect of many other complex geometries.

Metallocenes:    Metallocenes have the split 2-1-2. The orbitals in the xy plane ( d xy and d x 2 - y 2) hardly interact with the ligands and are therefore favored. d z 2 only interacts with one part and lies in the middle. Strongly destabilized are d xz and d yz , which point completely to the rings.

Conclusions from the splitting of energy

The colors of the transition metal salts come about through the splitting of the d orbitals described . Electrons from the d orbitals of lower energy can be excited with light into the orbitals of higher energy. Only light with a certain wavelength is absorbed , which corresponds exactly to the energy difference between the favored and the disadvantaged orbital. Since the distances are small, the absorption is in the visible range.

There are two ways to occupy d orbitals:

The more unpaired electrons there are on the cation, the more paramagnetic it is. Based on the statements about the resettlement of the d orbitals, the magnetic properties of many transition metal salts could be clarified, especially the formulation of high spin and low spin configured cations explains the high paramagnetism of iron or cobalt salts with weak anions / ligands and the comparatively low paramagnetism with strong anions / ligands. If all electrons are paired, then the ion is diamagnetic .

A compound is thermodynamically stable when it is itself energetically favorable and a possible product from this compound is energetically less favorable. With the crystal field theory one can use the d orbital splitting to estimate whether a compound is more favorable or more disadvantageous than its product and how big the energetic difference between them is. This makes it possible to predict whether a reaction is thermodynamically possible. These predictions hold true for most of the Ionic and Classical complexes .

Scope of validity of the crystal field and ligand field theory

The purely quantum mechanical MO theory provides a more precise picture of the complex structure because the ligands are also treated quantum mechanically, but the resulting splitting pattern is the same as in the crystal field and ligand field theory. What the crystal field or ligand field theory describes as stronger electrostatic repulsion, in the MO theory is greater splitting and raising of the antibonding orbitals (the binding orbitals are occupied by the electrons of the ligands). Only the MO theory provides an understanding of the covalent bond component in complexes with π backbonding, as they are e.g. B. occurs in carbonyl complexes.

Several theories are required to fully understand the complex compounds.

The systematic connection between all complex theories, especially the complementarity of crystal field and ligand field theory, points to the existence of a uniform field of molecular behavior that is closely linked to the spatial structure.