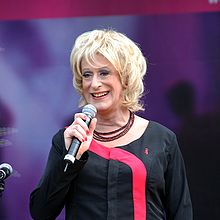 Lilo Wanders as a presenter at ColognePride 2009 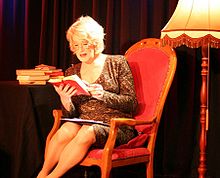 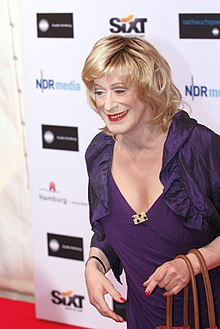 Ernst-Johann "Ernie" Reinhardt (born September 22, 1955 in Celle ) is a German actor and travesty artist who appears almost exclusively in a female role under the name Lilo Wanders .

Reinhardt grew up in Dorfmark near Bad Fallingbostel . In Walsrode he attended high school in Walsrode until he moved to Hamburg at the age of 18 to study librarianship . Meanwhile he did an internship in Bremen . The study he broke off. In Bremen Reinhardt became a member of a gay choir and went on tour with a gay theater group. Reinhardt lived in Hamburg in the 1980s and appeared here with gay ensembles and in solo programs in the Hanseatic city's alternative theater scene, among others. a. with Corny Littmann . On August 8, 1988, Reinhardt and Littmann opened the Schmidt Theater on the Reeperbahn in Hamburg . He quickly caused a sensation through shrill conversation and achieved regional fame.

A short time later, the fictional character Lilo Wanders was created on the stage of the Schmidt Theater , laid out as a vicious, aging theater diva with numerous airs. The model for this was the actress Evelyn Künneke (1921-2001). In the early 1990s, Lilo Wanders was an integral part of the Schmidt Midnight Show on NDR television (then called N3). Lilo Wanders is a trademark registered by Ernst-Johann Reinhardt at the German Patent and Trademark Office . From 1994 to 2004 Reinhardt moderated in the travesty role of Lilo Wanders the television program Wa (h) re Liebe on the television broadcaster VOX , which brought the character to nationwide fame. Reinhardt performed nationwide with the plays The Mythomanin about Evelyn Künneke and The Gray Angel about Marlene Dietrich (written by Moritz Rinke ). In addition, as Lilo Wanders, he occasionally performed vaudeville programs, hosted gala evenings, played roles in cinema and television films and was a guest in television shows, such as Blond am Freitag on ZDF .

In September 2010 Reinhardt was seen in two episodes of the ARD telenovela Rote Rosen . Since April 2011 he has been guiding locals and tourists as Lilo Wanders in the “Tour de Schmidt” and since 2012 as a member of the Olivia Jones family in the “Tour de Wanders” on the Reeperbahn and showing his favorite corners around St. Pauli . In 2016 he appeared on the show " Wanted: Daughter-in-Law " and helped Beate's permanent single with various sex topics.

Ernie Reinhardt is married and has three children. He lives in Hamburg and on a farm in the Altes Land .