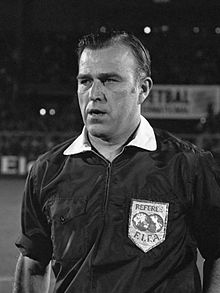 Glöckner initially worked as a soccer player at Stahl Markranstädt and after moving to SG Rotation Leipzig . In 1952 he passed the referee examination and in 1953 directed his first game: the district league match between Polygraph West and Motor Stötteritz . His achievements took him up to the top division, the GDR league , in which he was used as a referee in a total of 230 games for his hometown club Motor Markranstädt between 1959 and 1977. He chaired the FDGB Cup final four times (1963, 1968, 1971 and 1974).

Internationally, Glöckner was first used at the 1964 Olympic Games in Tokyo , where he led the match between Brazil and the United Arab Republic .

As a representative of the German Football Association , the football association of the GDR , he led the final of the football World Cup in Mexico between Brazil and Italy on June 21, 1970 in front of 107,000 spectators (4: 1). He was the first and so far only German to whistle the final of a world championship. As the Brazilian delegation did not accept any of the well-known European referees and the Italian national team did not want a South American referee, FIFA President Stanley Rous asked Glöckner to lead the final. Rudi Glöckner had only whistled an A international match before this World Cup and the final was only the second game of the tournament and thus the third international game for him, but the Mexican daily El Heraldo later ruled: “The GDR referee officiated in the style of a class man . ”Other voices, however, also criticized Glöckner's performance, in particular Pelé's scoring chance whistled .

On August 26, 1970, he headed the first leg of the World Cup finals between Estudiantes de la Plata and Feyenoord Rotterdam (2-2) in Buenos Aires and the second leg of the Fair Cup finals between Leeds United on June 3, 1971 in Leeds and Juventus Turin (1: 1). The following year Glöckner was used during the 1972 European Championships in Belgium. On January 16, 1974 Glöckner whistled the UEFA Super Cup final between Ajax Amsterdam and AC Milan in Amsterdam (6-0), in the same year he was also used in games of the 1974 World Cup . On May 19, 1976, the return leg of the UEFA Cup finals between Club Bruges and Liverpool FC (1-1) in Bruges, Belgium, followed . He is one of the few referees who acted as referee at two finals in the same international competition and is the German referee with the most international finals.

After the end of his career as a referee, Rudi Glöckner remained involved in the sport as an organizer of football tournaments and as a functionary in various referee commissions, including that of UEFA and the DFB as well as that of the NOFV , which he also chaired.

Referee of the games for the UEFA Super Cup

Referee of the UEFA Cup and UEFA Europa League finals